Embargo is a political decision taken by countries where government passes an order to restrict the free trade of goods & services between two nations for a specified period of time and the restriction in trade can include restricting all types of goods & services or trading of particular good like oil etc.

How Does Embargo Work? 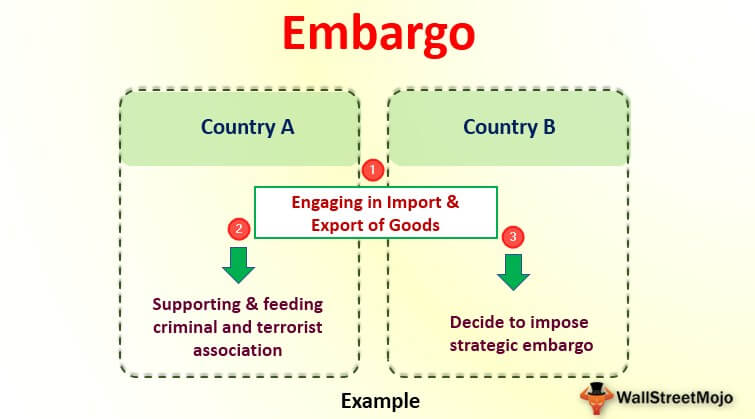 Let’s say for example there is a country A who is in good relationship with country B and they are continuously engaging in Import and export of goods and series between the two nations and the trade involves the trading of military weapons for the security of the nation.

But lately, it has been found that county A is supporting & feeding a criminal and terrorist association. And seeing the growing impact and activities the allied group of countries which includes country B decide to impose a strategic embargo and which resulting in no trading of security and military weapons with the target country forcing it to take action against terrorism to protect the world peace.

There are different types that could be imposed on a country or state, some of them are as follows:

They are mostly imposed on a country/state or group of countries/states. Such a country is termed as the target company. The purpose of imposing embargo relates to stopping the activities in which the target country is actively involved and poses a threat to the security & peace of the world.

Some of the importance are as follows:

Embargo is an imposed restriction on trading activities with the target country. In history, it has been seen that several times it has been imposed especially during wartime to restrict one country for helping another country for weapons and other accessories which prolong the war and casualties. It is implemented by taking the safety of the other countries in mind.

This has been a guide to Embargo and its meaning. Here we discuss an example and types of embargo with their criticism and importance. You can learn more about economics from the following articles –