What is a Golden Parachute?

A golden parachute is a contract between the company and their employees usually the top management that the latter will receive significant benefits such as cash bonuses, medical benefits, stock options, severance pay, retirement package, etc. if their employment in the company is terminated due to any Corporate restructuring activity.

“Marissa Mayer will make over $44 million if Verizon fires her”- quoted the Business Insider a few months back. CEO Marissa Mayer became the subject of widespread speculation for reasons other than her performance at Yahoo! Ever since Verizon agreed to buy the internet giant, the industry has been abuzz with the exorbitant Golden Parachute that Marissa would be flying within case the former decides to terminate her.

The name “Golden Parachute” is used to denote the soft and safe landing of the terminated executive with monetary benefits way above the usual severance packages.

While this was an isolated incident in the 60s, it soon became a preferred way of compensating white-collar employees, particularly in the late 70s. Hostile takeovers became the order of the day in the 1980s, and the US corporate landscape saw a surge in the Golden Parachutes. As per Harvard Business Review, by 1986, around 35% of the largest 250 US corporations had implemented a clause stating that their executives will be provided with cash payments along with a range of other benefits in case there is a change of hands. 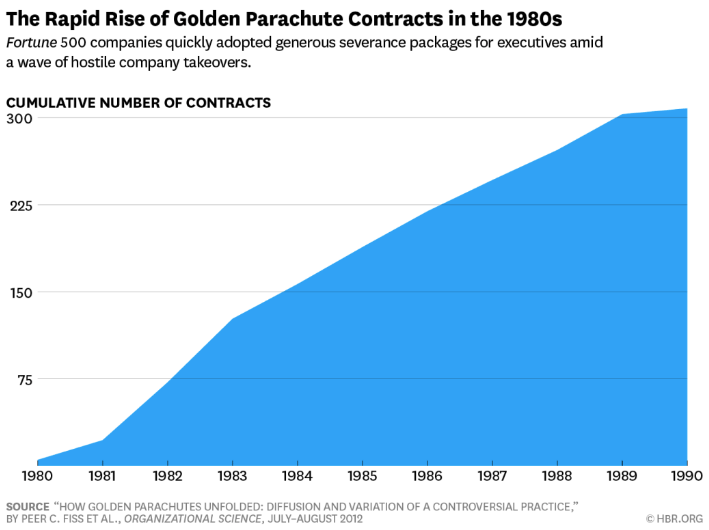 The graph shows that there was a significant rise in the Golden Parachute contracts in the decade between 1980 and 1990. The cumulative number of contracts jacked up from 75 to 300. Earlier, only small companies fell prey to hostile takeovers. However, with the popularity of the junk bond market, financing became comparatively easier, and even large multinationals and Fortune 500 companies became easy targets of hostile takeovers. During this period, several companies included the clause of Golden parachute in their employment contracts in an attempt to retain highly qualified employees. It was considered a major element of security by high-level executives before they took up jobs in merger-prone industries. Needless to say, it was a defensive mechanism also for hostile takeovers as it increased the cost of takeovers considerably. 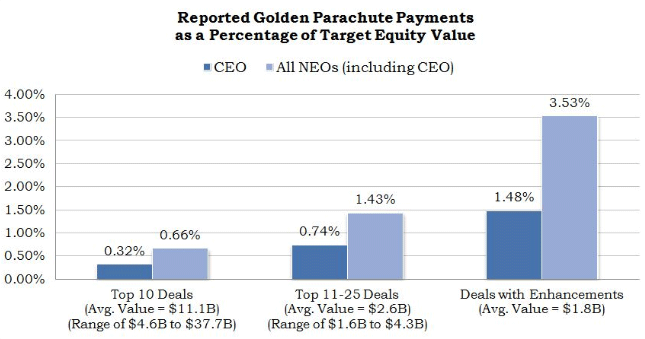 An advisory firm, Institutional Shareholder Service (ISS), has revealed a trend that the quantum of a golden parachute as a percentage of the equity value increases as the deal size becomes smaller.  The graph shows the size of reported golden parachute payments as a percentage of the target’s equity value for the 25 largest deals announced between May 2013 and April 2014 and also included the 65 companies that enhanced compensation for executives.

Another term used in a similar sense is Golden Handcuffs. While Golden Parachutes and Golden Handshakes may make the high-level CEOs more inclined towards the exit to receive the hefty package waiting for them, Golden Handcuffs act oppositely. They act as a disincentive for executives to leave the company and joining the competitors. It is said that under golden handcuffs, executives have to give back the bonuses and rewards received if they leave before a stipulated period. 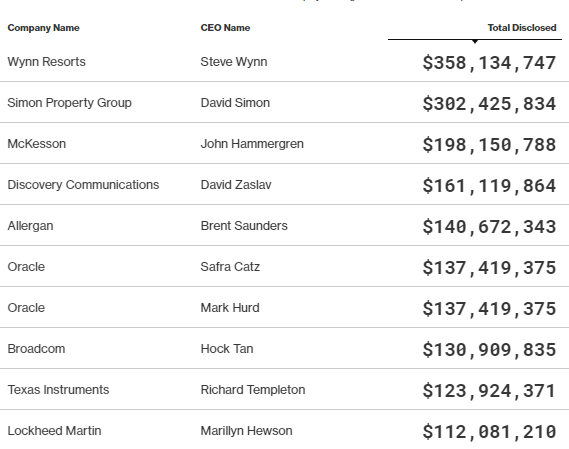 Something seemingly so attractive cannot be sans controversies and criticisms, isn’t it? Golden Parachutes have been the favorite punching bag for many critics. The groups particularly miffed with it are the shareholders and other employees of the company. Few reasons why Golden Parachutes are usually opposed to are:

Shareholders, in particular, are not too fond of Golden Parachutes because many of them are of the opinion that it is unnecessary wastage of shareholder’s money. They feel many CEOs who are promised hefty severance packages will only be enamored by it and not work for the long-term goals of the company. Whether or not their fears are genuine is challenging to be concluded, though.

In a research paper titled-“Golden Parachutes and the Wealth of Shareholders” by Lucian A. Bebchuk, Alma Cohen, and Charles C. Y. Wang, it is stated that over the long-term, it may be harmful to shareholder value. Those companies which implement the golden parachute clause obtain lower risk-adjusted stock returns as compared to their counterparts, even though the latter is more likely to be acquired. The researchers explained that it makes an acquisition like a cake-walk for CEOs, and they aren’t afraid of being acquired. Therefore, they are not motivated enough to enhance shareholder value.

The ongoing opposition has gained considerable momentum over a couple of years. So much so that the Congress has released tax rules in a move to discourage rampant golden parachutes involving “too generous” severance packages. Additionally, in 2010, section 951 of the Dodd-Frank Wall Street Reform and Consumer Act has also made it compulsory to obtain votes of advisory shareholder on all instances of golden parachutes, henceforth.

In 2011, the SEC unveiled a new clause on the Say on Pay vote and Golden Parachute. The Say-on-Pay vote requests investors to vote on the compensation of the top executives of the company – the CEO, the Chief Financial Officer (CFO), and at least 3 other most highly compensated executives.

The SEC mandated that –”Companies are required to comply with the golden parachute shareholder advisory vote and disclosure requirements in proxy statements to approve a merger or acquisition, and similar forms initially filed on or after April 25, 2011.”

According to a consultancy, Pearl Meyer, the data between 2011 and 2014 reveals that merely around 5% of Golden Parachute votes garnered less than majority support. Even though in most of the cases, shareholders were not opposed to the actual merger. Concerned shareholders are now taking a stand against this as they do not deem appropriate.

The internal revenue code has three components pertaining to the golden parachutes. As per Section 4999 of the IRS, a 20% excise tax is imposed, additional to the normal income tax, on “excess parachute payments,” while section 280G deems the payments under Golden Parachute non-deductible to the company. Congress passes these provisions as a part of the Deficit Reduction Act of 1984. Lastly, section 162(a) of the internal revenue code denies tax-deductibility of any compensation over and above $1 million unless the same is linked to the performance of the executive. This way, the under-performing high-ranking executives, when compensated with a hefty package, will come under the purview of this section.

Technically, Golden Parachute is defined as a contract between the Company and its top-level management, which entails that the executives will be offered considerable benefits if the latter is terminated as a result of the restructuring activity. These benefits usually include cash bonuses, stock options, a retirement package, medical benefits, and of course, a handsome severance pay. It is also used as a tool for the Anti-takeover mechanism or Poison pill to dissuade any potential merger. The quantum of benefits or compensation promised to the crème-de-la-crème of the company might lead many acquirers to change their takeover decision.

This article has been a guide to what is Golden Parachute. Here we discuss examples, criticisms & controversies, and regulations of Golden parachute along with tax perspective. You may learn more about financing from the following articles –