What is Show Stopper in M&A?

Show Stopper refers to any law or regulation, which makes the possibility of a hostile takeover impossible or unnecessarily expensive. It could be in the form of a legislative act or a court order. For instance, a target firm may convince the state legislators to pass/tweak anti-takeover laws preventing a hostile takeover. 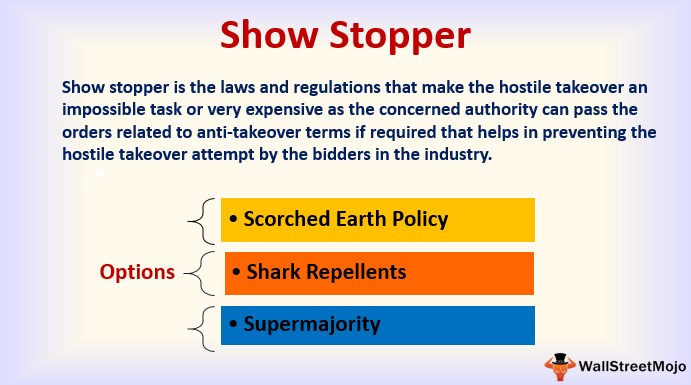 Let us analyze some of the show stopper options considered by firms:

This option of show stopper includes tactics for making the target company less attractive to the hostile bidders. The terminology has a military origin and is considered a last-ditch effort before either succumbing to the take-over or winding up the business. Some of the options are:

Such measures also have drawbacks and can also backfire. E.g., the hostile firm may seek an injunction against the defensive actions of the company. Let’s say, a steelmaking firm may threaten to purchase a manufacturer entangled in the legal battle for producing poor quality parts. In this case, the intention of the target firm will be to purchase the futuristic liabilities in an effort to burden the new company with those liabilities causing it to be unattractive to hostile bidders. However, the bidder may counter the same by securing a court injunction preventing the actions of the target firm.

Shark Repellent options of show stopper are continuous or periodic efforts imposed by management for locking out hostile takeover attempts. It involves making special amendments to the bylaws in favor of the target company when the takeover attempt is made public. The prospective takeover may or may not be in favor of the shareholders, and attempts have to be analyzed on a case to case basis. Some of the common examples are:

It involves including a provision within the contract of the executive, which will offer them a substantially large compensation if a takeover attempt is successful. It could be cash and stock, making it costly and less attractive to acquire the firm.

This clause predominantly protects the senior management under threat of termination if a takeover materializes. However, there is a possibility of executives deliberately using the clause to make it attractive for the acquirer to pursue the acquisition with a promise of massive financial compensation.

An example is of Meg Whitman (CEO of Hewlett Packard), who is entitled to receive $9 million if the firm is taken over and more than $51 million in case of termination.

Poison Pill indicates an event that significantly raises the cost of acquisitions and creating large disincentives to prevent such attempts. It includes methods such as:

However, firms should be careful while implementing this strategy as they can give rise to high costs and not necessarily in the long term interests of the stakeholders. The two types of poison pills are ‘flip-in’ and ‘flip-over’ poison pill.

Staggered Board of Directors

The focus is to spread the appointment of directors over a period of time. The firm could perhaps elect a new board of directors every 2 years, making it difficult for an acquirer to influence the majority of directors at the same time. There is a possibility of a difference of opinion arising and not offering enough time for the acquirer to make a complete decision.

This tactic of show stopper is provided in the bylaws of the firm, which is activated when an acquirer initiates a takeover attempt. This strategy requires around 70-80% of the shareholders to accept the takeover making it difficult for the acquiring firm since a huge number of stocks will be required to gain a voice in decision-making.

There are specific additional examples of show stopper we can study:

An American high profile investor by the name of Ronald Perelman was consistently interested in taking over Gillette post successfully acquisition of Revlon Corporation. It appeared that Perelman would proceed with a tender offer for Gillette, which in turn was countered by paying $558 million to Revlon in return for an agreement that it would not make any tender offer to stockholders of Gillette. To make this a fool-proof plan, Gillette further paid an additional $1.75 million to Drexel Burnham Lambert (a significant investment banking firm). In return, Drexel Burnham Lambert agreed not to participate in any takeover involving Gillette for 3 years.

Brown Forman Corporation (Wine and Spirit maker) attempted a hostile takeover of Lenox (a significant producer of bone china ceramics, collectibles, and giftware). Forman offered the public shareholders worth $87 per share of Lenox, which was then traded at $60 per share at the NYSE. Martin Lipton, working for Lenox, suggested to offer a ‘Special Cumulative Dividend’ to all the shareholders. The dividend was offered in the form of convertible preferred stock, which the shareholders of Lenox the right to purchase the shares in Brown Forman Corporation at a deep discount on account of any hostile takeover initiation. The strategy proved to be a success as Brown Forman was forced to hike the offer and enter into a negotiated agreement for the acquisition of Lenox.

AMP Inc (a leading maker of electronics equipment) executed a ‘White Knight’ defense strategy against a $10 billion takeover bid by Allied Signal Corporation (aerospace and automotive parts producer). As a part of this strategy, the company reached out to a friendly bidder for aid and negotiated to be acquired by an ally instead of a hostile corporate. AMP-managed to strike a stock-for-stock swap deal for $11.3 billion with its white knight, Tyco Inc, which was a Bermuda based conglomerate.

This article has been a guide to Show Stopper in M&A. Here, we discuss the types of show-stopper options considered by firms (including Scorched Earth Policy, Supermajority, and Shark Repellents) along with some examples. You may also have a look at our suggested articles:-