What is a Poison Pill?

Poison pill is a psychology-based defensive technique where the minority shareholders are protected from an unprecedented takeover or a hostile management change by using techniques to increase the cost of acquisition to a very high level and create disincentives if a takeover or management changes happen to alter the decision maker’s mind.

Let’s dig deeper to understand the history of this mechanism and the story behind its morbid name! 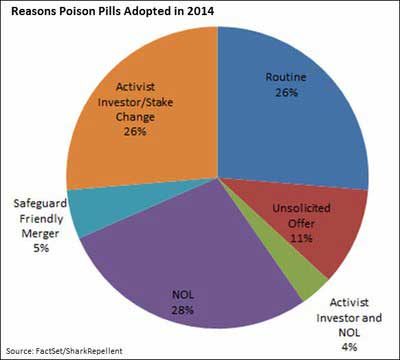 Main reasons for the adoption of poison pills

A “Poison Pill” is a popular defense mechanism for a “target company” wherein it uses shareholder’s right issue as a tactic to make the hostile acquisition deal expensive or less attractive for the raiders.  This strategy also acts as a tool to slow down the speed of potential hostile attempts in the future.

They are generally adopted by the Board of directors without the approval of shareholders. It also comes with a provision that the rights associated can be altered or redeemed by the board when required. This to indirectly compel direct negotiations between the acquirer and the Board, so as to build grounds for better bargaining power.

It can pinch in two ways: They can either make an acquisition a very hard nut to crack, or they can have negative side-effects that unfold in various stages.

Poison Pill is an all-encompassing term, and there are various forms in which it is triggered in a practical corporate setting. Some of the widely used tools are: 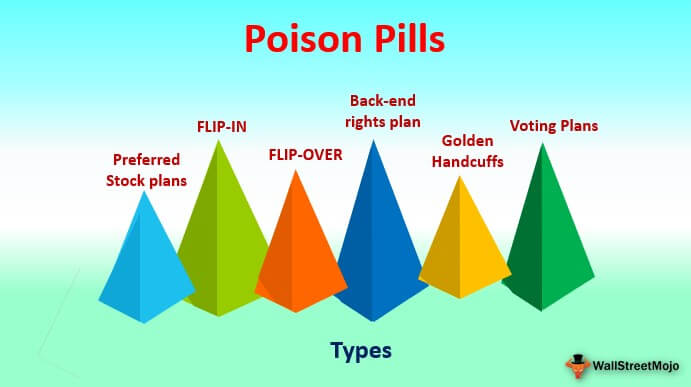 Prior to 1984, when hostile takeover just jutted their ugly head, Preferred stock plans were primarily used as Poison pills. Under this plan, the company issues a dividend of preferred stock to the common shareholders, which come with voting rights. Preferred stockholders could exercise special rights whenever outsiders suddenly bought a large chunk of shares.

Post-1984, certain other methods also saw the light of the day. One such tactic is the Flip-in poison pill. When corporate raiders buy sizeable holdings in a company, Flip in is one of the most preferred strikes back. Here the target company buys a large number of shares at a discounted rate to counter the offer, which eventually leads to the dilution of control of the acquirer. For e.g., if an investor buys more than 15% of the company’s stock, other shareholders apart from the bidder buy an increased number of shares. The greater the additional shares purchased, the more diluted the acquirer’s interest. It also increases the cost of the bid. Once the bidder gets a hint that such a plan is being executed, he may become cautious and become discouraged to pursue the deal further. It may also be possible that the bidder then comes up with a formal offer to the board for negotiation.

Flip-over is the opposite of Flip-in and happens when the shareholders choose to buy shares in the acquirer’s company after the merger. Let’s say the shareholders of the target company exercise the option of buying two-for-one shares in the merged company at a discount. This option usually comes with a pre-determined expiration date and no voting rights.

Diluting the acquirer’s interest to a significant extent makes the deal quite expensive and exasperating. If the acquirer backs off, the target company can redeem those rights as well.

Under this defense mechanism, the target company shuffles employee stock-option plans and designs it in a way that they become effective in the event of any unwelcome bid. This entails providing shareholders a privilege to obtain shares with a higher value if the acquiring company takes a majority stake. This way, the acquiring company would not be able to quote a lower price for the shares. This is nothing but a move to deter the acquisition. However, under exceptional circumstances, if the acquirer is ready to offer a greater price, the Back-end rights plan falls through.

We all agree that employees are the biggest assets of a company. Golden handcuffs are nothing but various incentives offered to the crème-del-a-crème of the company to ensure that they stay on. Usually, Golden handcuffs are issued in the form of deferred compensation, employee stock options (ESOPs), or restricted stock, which can be earned after the employee reaches a particular performance threshold.

However, not many of us know that Golden handcuffs can be also be used as an anti-takeover mechanism. When an unsolicited bid happens, this Poison Pill gets triggered. The key staff becomes vested in stock options, and their golden handcuffs are removed. These employees, some with extremely rich experience and acumen, are now free to leave the company. The acquirer will, therefore, loose key executives of the target company, and this will make the path difficult for him to tread.

Designed on the same lines as the Preferred Stock Plan and Flip-in, this tactic involves voting rights as a tool of controlling mechanism. When a substantial block of shares is obtained by an investor, preference shareholders (apart from the large block holder) become authorized to super-voting rights. This makes it difficult and unattractive to obtain voting control by the bulk share purchaser.

Trends of poison pills adopted according to market cap (till 2014)

Source: The University of British Columbia

Every phenomenon in the world has a history behind it, and Poison Pills is no exception. The blatant occurrences of hostile takeovers and defense mechanisms were in full momentum in the 1980s. Hostile takeovers became the order of the day. Beginning since the 1970s, corporate raiders like T. Boone Pickens and Carl Icahn sent chills down the spine of many corporate boards. There was no legalized defense tactic in place. In 1982, M&A lawyer, Martin Lipton of Wachtell, Lipton, Rosen & Katz, came as a knight in shining armor and invented the “poison pill” defense to prevent hostile corporate takeovers. According to experts, this was the most significant legal development in corporate law in the 20th century.

The legality of poison pills had been vague when they first came in the early 1980s. However, the Delaware Supreme Court advocated poison pills as a valid defense tactic in its 1985 decision in Moran v. Household International, Inc.; there, many jurisdictions outside the U.S. that consider poison pills as illegal and place constraints on its applicability.

So what’s the story behind such an awkward name? This dates back to the tradition of espionage prevalent during the monarchical era.  Whenever a spy was caught by an enemy, he immediately swallowed a cyanide pill to escape interrogation and revelation of truth. Poison Pill owes its name to this practice.

Carl Icahn, an institutional investor, caught Netflix off-guard in 2012 by acquiring a 10% stake in the company. The latter responded by issuing a shareholder’s right plan as a “Poison Pill”, a move that irked Carl Icahn to no end. A year later, he cut his holding to 4.5%, and Netflix terminated its right issue plan in December 2013 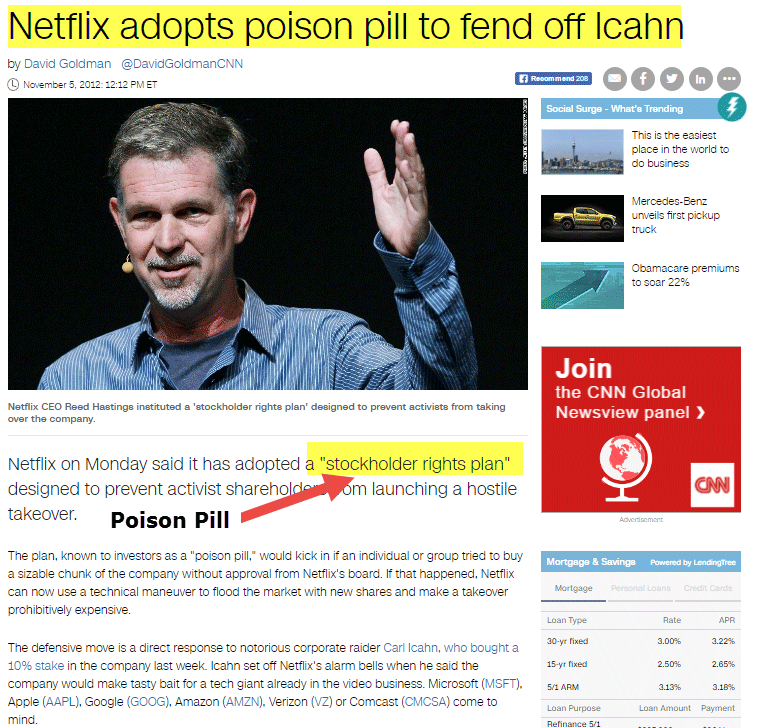 When FXCM Inc planned to acquire GAIN Capital Holdings, Inc. back in April 2013. GAIN responded by triggering a “poison pill”. Rights were decided to be distributed as a dividend to the common shares at the rate of one-for-one of the company held by stockholders. Upon the occurrence of an unforeseen event, each right would authorize stockholders to buy one-hundredth of a share of a new series of participating preferred stock at an exercise price of $17.00, which was later raised. 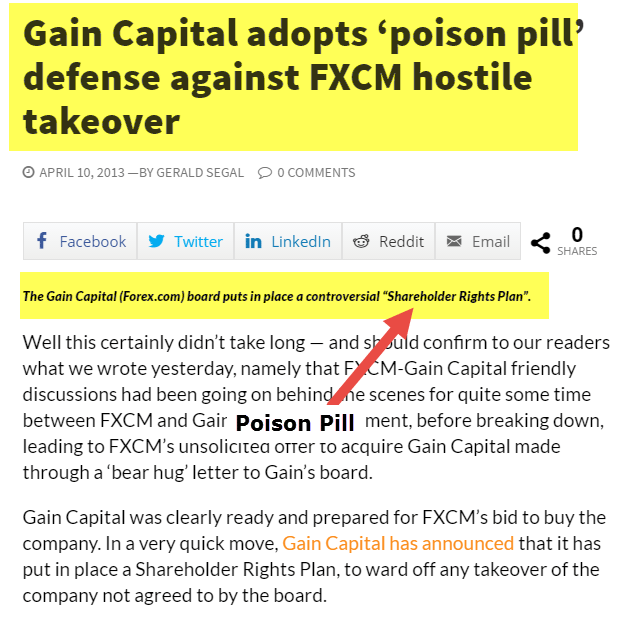 The Board of Directors of Micron Technology Inc., the largest US memory chipmaker, adopted a “Poison Pill” strategy in the apprehension of a hostile takeover. The tactic was a rights issue that would be triggered if an individual or group acquires 4.99% or more of the company’s outstanding stock 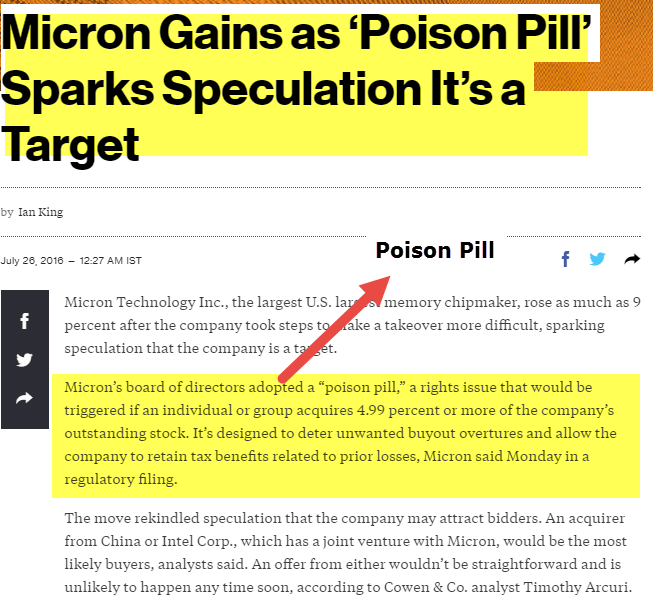 More recently, in September 2016, Pier 1 Imports Inc resorted to Poison Pill measure when hedge fund firm Alden Global Capital LLC disclosed a 9.5% stake in the former. The agreement entitled every common stockholder the right to buy a fraction of junior preferred stock at the price of $17.50. The preferred shares would have similar voting terms to common stock, diluting the control of any shareholder capturing a big stake. 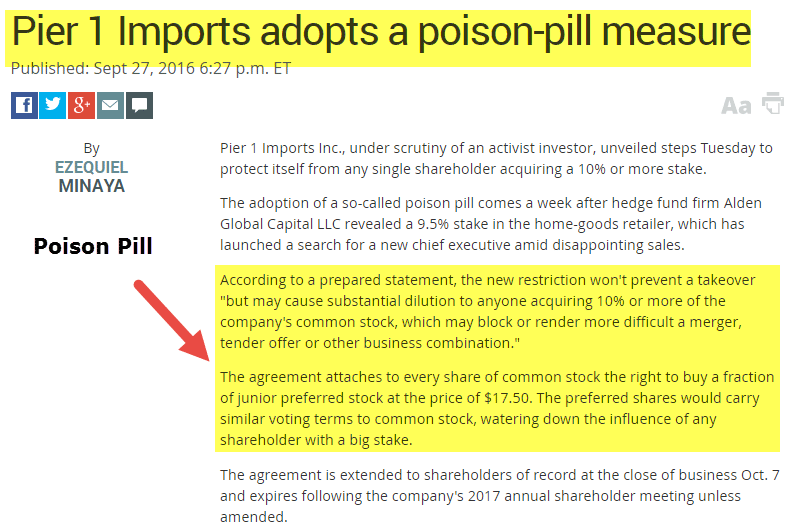 Advantages and Disadvantages of Poison Pill

Hostile takeovers and defense mechanisms cannot be classified in black and white compartments. There are certain grey areas also. Not all takeovers are bad; neither are all takeover defense mechanisms in the best interests of the company. Some of these investors have significant knowledge of the industry and company affairs, sometimes much better than the company’s management itself. Corporate raids or hostile takeovers have manifested themselves in a relatively constructive form called “Investor Activism” these days. Any act of investors to influence corporate paths or shareholders’ long term goals is viewed as activism.

According to S&P Capital IQ, “The agendas vary among investors and focus on specific areas, including cost reductions, reorganizations, corporate spin-offs, revamped financing structures, greater leverage, and more shareholder-oriented uses of cash and liquidity to realize higher enterprise value in the public markets.”

Thus we can see that the practice that took the corporate world by storm in the 1980s is relevant even today. S&P Capital IQ stated that; from 2005 to 2009, 89 activist actions occurred, while in the past five years, from 2010 to 2014, 341 actions took place. There has been a volume increase each year since 2010, and this trend has sustained itself strongly in 2015. 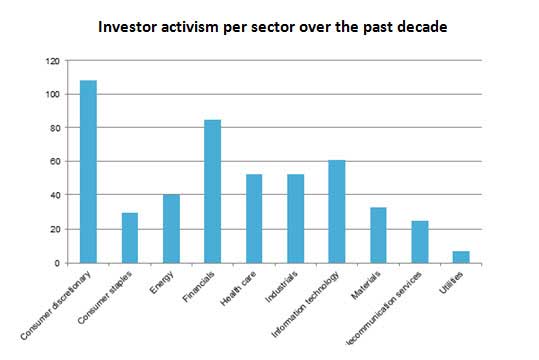 Source: S&P Capital IQ based on data (companies with individual market capitalizations of $1 billion or more) from 1 Jan 2005 to 19 June 2015

Before ascertaining whether Poison Pills are doing any good to the company, we need to understand that any company has many stakeholders, and each of them is effected in a different way during a potential takeover.  Shareholders have a pecuniary interest in maximizing the value of the company’s shares. The board of directors has different financial stakes and responsibility towards the company and the shareholders. At the same time, corporate executives who also have ownership in the company may either stand to gain or lose from the takeover.

Other company employees, usually at the lower and middle level, stand to lose most of the time as the result of mergers. News of acquiring companies announcing mass layoffs during mergers is also not unheard.

It is difficult to conclude whether a Poison Pill is actually beneficial or not. It all depends on the long term goals of both the companies. Understanding how a company responds to hostile takeovers with a poison pill or other defense can reveal great truths about how a company tackles critical issues pertaining to the management and itself.