What is the Lobster Trap ?

Lobster Trap Defense refers to the strategy which is used by the company under the target in order to prevent itself from the hostile takeover and according to which the shareholders having the ownership of converting stock of more than 10% in the company cannot convert their securities into the voting stock.

It is a tactic used by the targeted company to prevent any hostile takeover. In these tactics, the owners of more than 10% of converting securities of the company won’t be able to convert the securities into voting stock. The tactic prevents the big fish from swallowing the small ones, and it does not apply to the small threats. 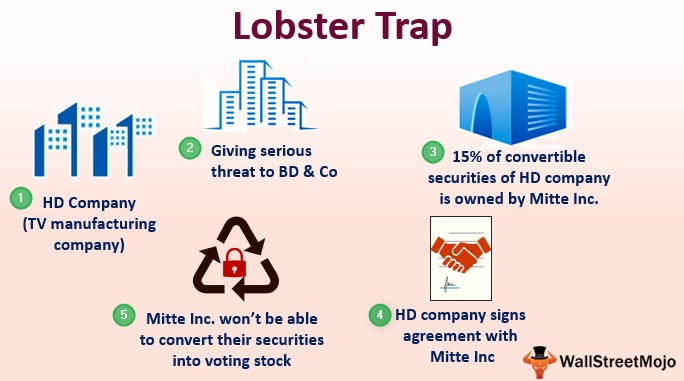 Example of the Lobster Trap

Let’s say that the HD company has been doing well in TV manufacturing. They’re new in the market, but they have been giving a serious threat to a significant player called BD & Co. On the other hand, 15% of the convertible securities of HD company is owned by a big company called Mitte Inc. Since a reasonable part is owned by the Mitte Inc., it can be a matter of concern for HD company since big fish like BD & Co. can swallow them without much effort and using the securities of Mitte Inc.

Now, since HD company can see that BD & Co. can try to take over the company, they’re feeling a serious threat. But the good news is while signing the agreement with Mitte Inc.; they included a clause stating that Mitte Inc. won’t be able to convert their securities into voting stock (think about the specificity of this trap where it’s mentioned that if a company or an individual owns over 10% of the convertible securities of the firm, the company or the individual won’t be able to convert the securities into voting stocks).

Since this clause is added, HD company is now safe. And BD & Co. won’t be able to take over their new competition by straightforward means. It only happened because the management made a prudent decision at the time of signing agreement with the Mitte Inc. And this particular tactic is saving the company from getting swallowed by the big fish is called the lobster trap.

How Effective is the Lobster Trap?

The effectiveness of this strategy depends on how far-fetched the board of directors of a company can think. If a company becomes complacent and can’t see serious threats from their big competitors, then they won’t be cautious and would be easily swallowed by the big fish.

Like the example we saw above, the management was prudent enough to include a clause in the agreement that saved them from the big competitor. It’s important to know that this trap isn’t effective for similar or small companies. It is only applicable for big and giant companies, preventing big companies from forcefully taking over a small business.

Why the term ‘lobster trap’ is added to the lexicon of the anti-takeover tactics?

The reason is simple. It’s exactly like catching lobster. The size of the lobster is prodigious. It has a huge cylindrical body, and the most crucial part is the first five pairs of the lobster are transmuted into pincers. When this trap is created, it’s created to catch the lobster only and not the small ones.

That’s why only the big, giant lobster gets trapped in the trap and other small ones manage to escape. In terms of a lobster trap as an anti-takeover strategy does the same thing. It doesn’t take into account the small players. It only gets created to prevent the big fish to forcefully take over the targeted company.

To be precise, the world of business is not always the bed of roses. People do things that shouldn’t be done at all. In this age of collaboration of information overload also, many businesses use power and influence to persuade a smaller entity to do something that they never want to do at the first place.

The lobster trap is a great strategy. But it would work best when it is coupled with other strategies. Because sometimes little things become big things. In it, little players are not given attention, and the trap is created to capture a/many big fishes.

This article has been a guide to what is Lobster Trap Defense and its definition. Here we discuss how this anti-takeover strategy works along with examples and its advantages. You may also take a look at useful articles below