The following hypothetical put options examples provide an inexhaustive list that will help the readers understand some of the most common put options examples and how they have become an important part of portfolio management, hedging, and a speculation tool for making leveraged trades.

Put Options are derivative instruments that enable its buyer a right but not an obligation to exercise his right of selling a particular security at a pre-specified price popularly known as strike price on the date of the expiry of such a derivative contract. Since these options provide a right but not an obligation on the buyer, the buyer of a put option can make the right go worthless if the value of the underlying falls below the strike price (since in such a case exercising the put option is futile as the underlying security can be bought at lower levels directly from the exchange) where the security is listed/traded. 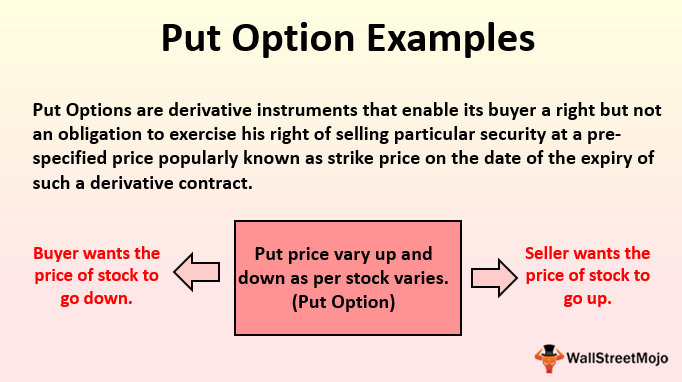 The following are examples of the put option for your better understanding.

Let’s understand how they are helpful in the hedging of the portfolio through the below example:

Seed Venture is an investment management firm and specializes in managing a portfolio of a basket of securities on behalf of its clients spread across the globe. The firm is holding multiple stocks forming part of NASDAQ and is concerned that the index will fall in the next two months owning to dismal corporate earnings, trade war, and poor administration and intends to safeguard the portfolio without liquidating the securities. Michael Shane, the young portfolio manager suggested opting for a protective put strategy under which the firm purchased put options on the index as a hedge against its holdings in the constituents securities forming part of the index.

The firm bought at-the-money put options for next month’s expiry equivalent to its holding to make it delta neutral. at the end of the next month, Nasdaq fall by 10 percent, and the losses in its securities got adjusted with profit input options purchased by it and Seed was able to navigate its portfolio from losses by hedging the same through the purchase of put options.

They can be used under various options strategies along with selling underlying stock futures or by combining it with the call options to generate a good return with limited risk. Let’s understand this utility with the help of another example:

Shane, a seasoned trader believes that the Facebook share is highly overbought and the quarter results scheduled next week doesn’t justify the premium valuations; however at the same time, he’s skeptical about any favorable news regarding merger from Facebook which can hold the share of Facebook from a big downside. He believes that the price of Facebook inc. currently valued at $80 by the market will move significantly downside in the next one month and can hit $70 but believes that below $70 the stock may find support due to the QIP issue done recently at the level of $70. He intends to make money through this move by taking a hedged risk.

Thus his total cost is as follows: 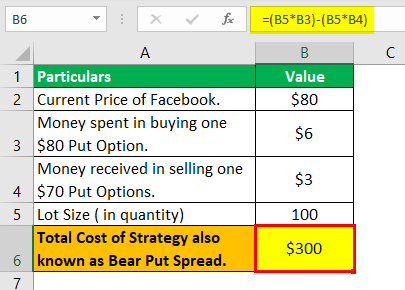 Now by entering into this strategy, Shane profit/loss potential on expiry will be as follows:

Thus using put option strategies and keeping the amount of investment low, Shane can create a hedged put position on the stock of facebook inc.

They are a great derivative instrument to indulge in speculation and make handsome gains when markets crash. Let’s understand that with the below example:

Ryan is a full-time trader based out of California is highly bearish on the s&p 500 index which is presently trading at 3000 levels. He believes that the global economic environment is pessimistic and the recession in us is not far away and expects the market to fall badly. He believes that the S&P 500 index will easily fall to the levels of 2500 within two months and decided to purchase a huge quantity of put options with a strike price of 2700. Details of the same are mentioned below: 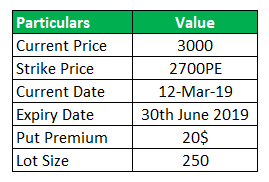 The above numbers signify that Ryan will be in profit if S&P 500 index closes below 2680 on the expiry day (after adjusting for the premium cost, for simplification we are assuming it a European option which can be exercised only on expiry)

S&P 500 index closed at 2600 levels on the date of expiry. And Ryan made jackpot return on expiry date equivalent to $80 (after adjusting for the $20 paid by him)

However, if suppose S&P closed above 2700 levels on expiry the maximum loss suffered by Ryan will be equivalent to the premium paid by him on the put options as the option will be worthless.

Large institutional players with huge holding in particular securities also write put options to magnify their return. Due to the sheer holding, they can control the prices of such securities thereby making the put options become worthless for such put option buyers and pocketing the premium received by them from selling such put options.

Put Options find their utility in many investment and portfolio applications. Apart from being extensively used for speculation, it is well used in hedging by long-only funds and also to protect investors from downside in case of financial turmoil.

This has been a guide to put options examples. Here we discuss its definition and top 4 practical examples of put option along with detailed explanations. You can learn more about financing from the following articles –