In the world of finance, settlement of securities, including derivatives, is a business process whereby the contract is executed on pre-decided settlement date.

The second method is the Cash settlement method, in which case the cash position is transferred from the buyer to the seller on the settlement date.

What is a Cash Settlement?

This method of settlement involves the seller of the financial instrument, not delivering the underlying asset but transfers the Net Cash position. For instance, the purchaser of a Sugarcane Futures contract, who wants to settle the contract in cash, will have to pay the difference between the Spot price of the contract as of the settlement date and the Futures price pre-decided. The purchaser is not required to take physical ownership of the sugarcane bundles.

In derivatives, cash settlement is used in the case of a Futures contract since it is monitored by an exchange, ensuring smooth execution of the contract. 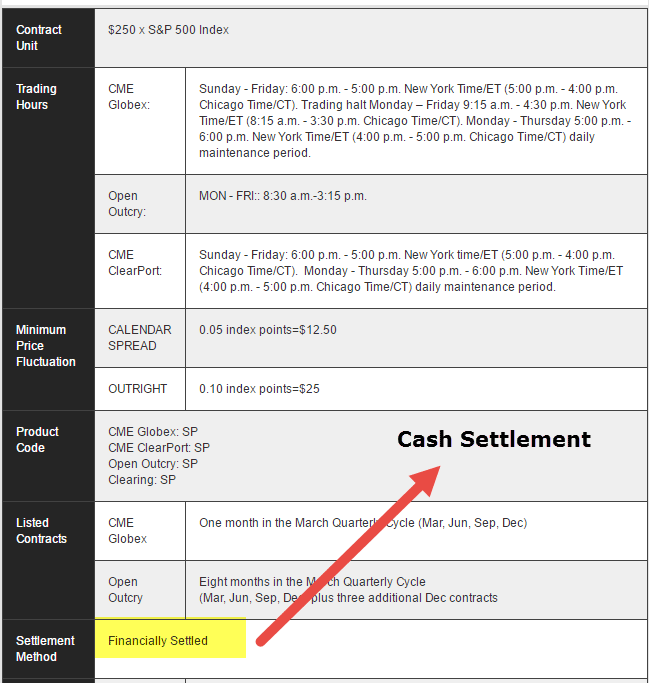 Extending the previous example of sugarcane in the commodities futures market, assuming an investor goes long (buy) on 100 bushels of sugarcane with a current market price of $50 per bushel. Assuming the settlement date is after three months post which if the price per bushel increase to $60 per bushel, then the investor gains:

In this case, the next profit = $1000, which will be credited into the trading account of the investor.

On the contrary, if the price falls to $45, then the investor will face a loss of:

With the advent of technology and continuous operating of all the markets, it is relatively easy to fund an account and commence trading without any knowledge of the markets around the club.

The same principle is also applicable in the case of Options contracts. To illustrate a cash settlement for a Put Options Contract, let us assume a Contract of Microsoft expires on the last Thursday of the month, and the spot price in the market is $100. The price specified in the contract is $75. This simply means the put contract was undertaken with the hope that the share price will fall below $75. However, now that the price is $100, the holder must make the purchase at $100 instead of $75. Hence if there were five lots of options to be purchased, then the net loss for the holder will be:

What is Physical Settlement / Delivery?

This refers to a derivatives contract requiring the actual underlying asset to be delivered on the specified delivery date, rather than being traded out net cash position or offsetting of contracts. The majority of the derivative transactions are not necessarily exercised but are traded prior to the delivery dates. However, physical delivery of the underlying asset does occur with some trades (largely with commodities) but can occur with other financial instruments. 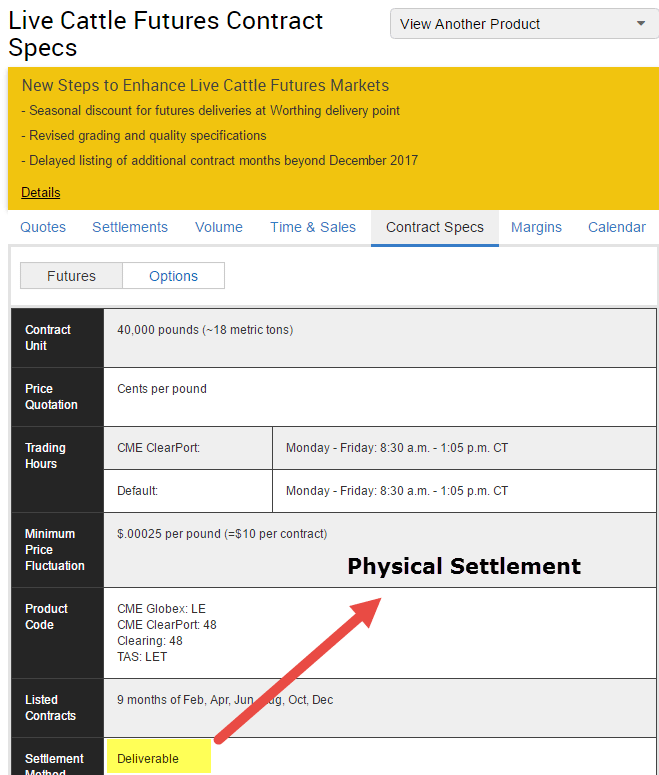 Settlement by physical delivery is carried out by Clearing brokers or their agents. Immediately, after the last day of trading, the regulated exchange’s clearing organization shall report a sale and a purchase of the underlying asset at the prior day’s settlement price (normally the closing price). Traders who hold a short position in the physical settlement of futures contract to expiration are required to deliver the underlying asset. Traders not owning them are obligated to buy them at the current price, and those who already own the assets have to hand it over to the requisite clearing organization.

Let us take an instance of a Commodity Futures contract, which is settled by Physical delivery upon expiration. For instance, a trader named Max has taken a long position of a Futures contract (the buyer of futures), and upon expiration, he is obliged to receive the delivery of the underlying commodity, which in this case can be assumed to be Corn. In return, Max is required to pay the agreed-upon price of the Futures contract was made for. Additionally, Max is also responsible for any Transaction cost, which may include Transportation, Storage, Insurance, and inspections.

On the other hand, there is a corm farmer named Gary who is looking to hedge his crop due to anticipation of possible fluctuation in the market prices in the commodities market. He calculates that he can grow around 150 bushels of CornCorn per acre (average estimate) and assume he has 70 acres of land.

As per the exchange rules, every single corn futures contract calls for 5,000 bushels. Gary will probably sell 2 Futures contracts to hedge his crop every year. This guarantees to hedge a substantial portion of his total growth.

The exchange will also state the standard/grade of the Corn, which the farmer has to meet. The quantity of CornCorn in the contract will be thoroughly inspected to make sure it meets or exceeds the specifications which have been stated by the exchange. Post-inspection, the recipient of the Corn is assured of good quality once it has been successfully transported to the decided location. A similar process is also applicable to Financials, Metals, and Energy products as well.

This trade of Corn can be broken down in the following steps for granular understanding:

This is generally the process if one wants the physical delivery of the commodity. Mostly, one will just offset the position by purchasing it back if sold first or vice-versa. The broker has all the positions of the investor being monitored on a risk server, which is dynamic and will intimate the broker whenever the contract is coming closer to a delivery situation. As time draws near to a First Day Notice (delivery situation) and the open position still exists, the broker will notify the same to know of possible intentions. If the holder does not have the full value of the contract, the broker will advise exiting the trade.

Brokers are responsible for any losses or fees towards the clearing exchange, and such expenses and losses are to be borne by the broker and not the brokerage house. This will motivate the broker to act in the best interest of the entire trade.

The primary Disadvantage of cash settlement in the case of Options is that it is available only on European style options, which are not as flexible as American options and can only be exercised at its maturity. A similar feature is also applicable for the Futures contract as well.

Most Futures and Forward contracts on various financial assets are settled in cash. For instance, Forward rate agreements, which are generally forward contracts on the Interest rate, indicate the underlying is an interest rate, and thus such contracts have to be settled in cash. Such contracts cannot be delivered physically. Commodities, generally physically settled, also have the possibility of settlement in cash long as an undisputed spot price is available and mutually agreed upon. Cash settlement also reduces the companies cost of hedging.

The primary benefit of Physical settlement is that it is not subject to manipulation by either of the parties since the entire activity is being monitored by the broker and the clearing exchange. The possibility of the counterparty risk will be monitored, and consequences are known for the same.

Though some do argue that physical settlement can be beneficial to the overall ecosystem in the future as it can aid in achieving at equilibrium price due to the physical visibility of the underlying asset, which otherwise can be manipulated with.

Whether a contract is to be settled physically or with cash can have an impact on the way the derivatives market can predict its future course. On the last day of trading, physically settled contracts will typically experience thin liquidity. This is because those traders who are not willing to convert their futures contracts to physical goods or are not going to execute their options contract have already exited the market by either rolling out their position to the following month’s delivery date or allowing the trade to expire. Accomplished traders with large positions can have a large impact on the price movements, and hence volatility increases as one head towards the expiry of the trade. This is often termed as “Time Value of Money,” which is also factored in a while arriving at the strike price of a trade. Large commercial traders who have the capacity to hold the delivery may even possess storehouses of the physical commodity. The exchange has to be vigilant so that such large traders with large positions do not have an impact on the overall price movement.

With the overall derivatives market becoming more institutionalized through electronic trading, the contracts themselves evolve, creating more efficiency of funds and for the traders. For the traders, it is not the method of settlement that matters, but the liquidity and transportation costs associated since the broker will also have an extended liability towards the same.