What is the Trade Wars?

Trade War is a situation when one country raises its tariff on imports and in response, the other country also raises its own tariff to restrict their imports. This results in an imbalance between imports and exports and is usually done to promote domestic production, increase employment in the nation, reduce balance of payment and also to create unfavorable condition to the enemy country.

#1 – To Protect the Domestic Economy

The reason behind increasing the tariff might be to protect the domestic manufacturers as they might be unable to compete with foreign companies.

#2 – To Create Jobs in Domestic Country

The importing country might want to create employment in the nation so as to reduce unemployment and increase the economy of the domestic country.

#3 – To Reduce the Balance of Payment Differences

Sometimes to protect the country tariffs increased or import restricted. This might happen when exports of the domestic country are less as compared to imports and because of this, the currency of domestic country devalues.

The exporting country may raise tariffs on imports to a specific country to create unfavorable conditions in another country. This is a planned trade war so as to make the country economically weak. This happens only when the domestic country largely depends upon the imports. 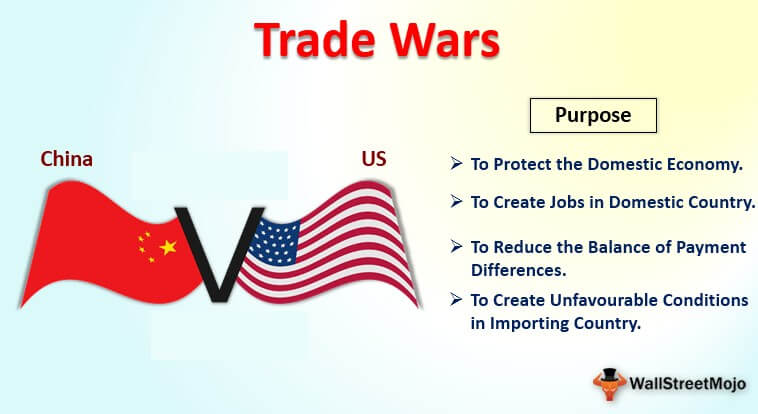 The trade war is initiated by restricting the trade or increasing the tariff on imports from another country the reason may be logical or evil. This war starts when in response to restriction or change in tariff the other country also restricts or increases the tariff or takes any other action which indirectly affects the importing country.

Trade wars affect the global economy at large as the connected countries also affect by this war. They can result in a global recession. This can be controlled when both the companies decide to enter into a unilateral deal or decide to negotiate or when they decide to involve the World Trade Organization for settlement and to restrict unfair trade practices.

This has been a guide to what is Trade Wars. Here we discuss the causes and effects of Trade Wars along with their purpose and example. You can learn more about economics from the following articles –