Vickrey auction is a type of auction which follows the second price mechanism methodology for its bid, which means it is a sealed bid where the proposals submitted are kept secret, and bidders are not allowed to know the bids made by others. However, when a bidder wins the bid, then they have to pay the prices, which are of the second-highest bid and not their bid amount, which was the highest.

Vickrey auction was coined by the name William Vickrey who was a Canadian and winner of the Nobel Prize in economics in 1996. It is a sealed bid auction but does not follow the traditional rules of sealed bid auction. Here the bidders are not aware of the bid made by others, and that is kept secret. The point where it is different from the traditional sealed bid option is that here the winner of the bid who has called for the highest bid will actually pay the price of the second-highest bid and not of his own bid. The kinds of balance amount which the bidder who won don’t have to pay is a kind of surplus. In such a kind of auction, the bidders are actually encouraged to pay based on their maximum willingness as anyways they need to pay for the second-highest bid. 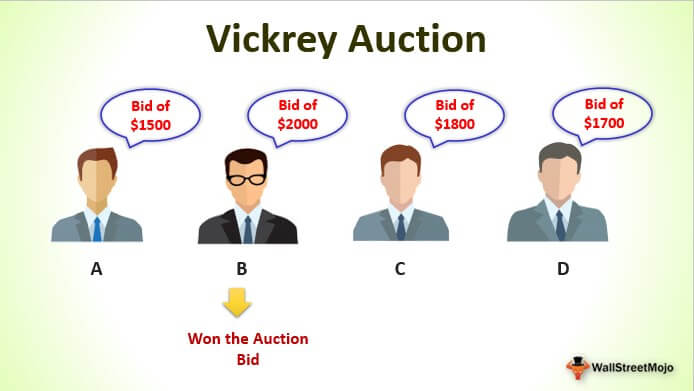 Vickrey auction is a type of auction where all the bidders will bid for their true value or worth and will have the maximum willingness to pay for the highest price to stand as the winner of the bid. The auction is a sealed bid where no bidder is aware of other bids. Thus everyone contributes willingly and wants to go the extra mile to win the bid. In a simple way, every bidder will put the maximum bid possible. They are kind of motivated or encouraged to quote a high bid because anyways, they won’t be paying the highest amount and will only have to pay for the second-highest bid. This will not cause any disadvantage to the bidder for quoting the maximum bid. Thus, we see Vickrey auction follows the second price mechanism. By following the second price mechanism, bidders will bid truthfully.

Let us consider a few examples to give a demonstration.

Suppose an online bid for the auction of painting is going live. A bidder places a bid of $5000 for it. Now when a bidder places that amount, he won’t place a bid more than $5000 because that is the maximum worth according to him for the painting, and he will also not place a higher bid on account of the fact that he might actually have to end upon paying the price higher than his willingness. On the other hand, the bidder will also not place a price lesser than $5000 because he might be of the belief that he might lose the bid if he places a lower bid than what he was actually willing to. Thus we find in Vickrey auction the buyer’s willing places a true bid for the item and is motivated to do so to win the bid.

Let us suppose an auction for an antique gemstone is going on, and there are four bidders who have got involved in the bidding process. Now, bidder A places a bid of $1500, bidder B places a bid for $2000, bidder C places a bid for $1800, and finally, bidder D places a bid for $1700. It is clearly evident now that bidder B had the highest bid, and he has won the auction bid. The twist in Vickrey auction is that although bidder B has won the auction quoting a bid of $2000, he will only pay the sum of the second-highest bid, which is $1800. Thus in this way, he is ending up in surplus money of $200. Thus, we see in Vickrey auction every bidder willingly motivated to call for the highest bud because of the hope to end up retaining surplus money. Every bidder tries to win the bid and thus places the bid truthfully based on the value of the item and is motivated about doing so.

The importance is as follows:

Vickrey auction is an effective way of conducting an auction though it is very rare and happens only at the limited occasion. It follows the second price mechanism, which encourages bidders to bid willingly and motivates them to win the bid. The item in bidding also ends up getting their true value or worth.

This has been a guide to Vickrey Auction and its definition. Here we discuss examples, importance, and how does Vickrey auction work along with its benefits. You may learn more about finance from the following articles –