What is an Asset Swap?

An asset swap combines a fixed-rate credit risk bond with a fixed floating interest rate swap, which transforms the bond into a synthetic floating rate note (FRN). The investor receives the relevant interbank benchmark plus a spread which is fixed at the initiation of the swap agreement and often bought by credit-focused investors such as hedge funds, mutual funds, and large financial institutions.

The spread depends on 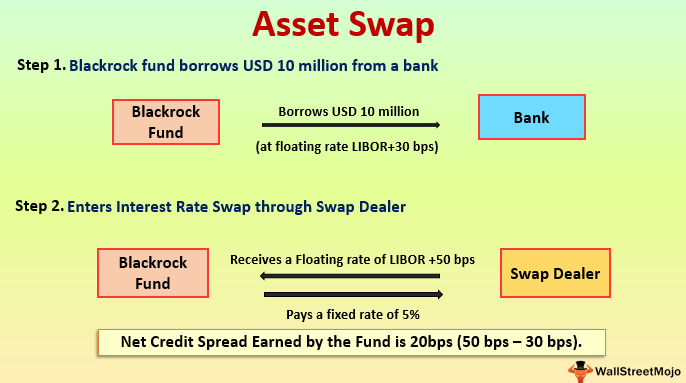 There are two types, which are as follows.

It is a combination of bond purchases and currency swaps. It is a mixture of 3 components:

If the resulting spread is superior to the spreads available from the same issuer’s domestic currency bonds/ FRN, it will result in profit.

Bond investors use very similar, but opposite transactions to exploit anomalies that will provide the cheapest source of finance in domestic and international bonds and financial markets, which are often described as liability swap. They are structured by corporate borrowers seeking to obtain the cheapest finance in domestic or international markets.

Let’s explain this by taking an example:

Blackrock fund borrows USD 10 million from a bank at a floating rate LIBOR+30 bps. It expects the interest rate to rise in the future resulting in an increase in borrowing costs, and wishes to hedge its exposure. Therefore, it enters into interest rate swap through a swap dealer wherein the fund receives a floating rate of LIBOR +50 bps and pays a fixed rate of 5% on a notional amount of 10 Million.

Motivation Behind these Swaps

Some of the important motivations for investors.

Such investor typically looks for leveraged exposures source on a floating basis. The cost of funding borne by the investor is pivotal to asset swap transactions. The deal is usually compared to unfunded alternatives, such as the possibility of selling CDS protection on the same reference entity.

The main motivation behind taking exposure on a relative value basis is to achieve the target credit spread. Investors normally do not hold simple accrual product till maturity and often attempts to liquidate it by entering into an opposite transaction with exact similar terms as the previous one that offset the exposure. Such a swap provides the funded investor with a superior net credit spread to CDS on the same reference asset.

For e.g., an investor purchases FRN on which it earns a spread of LIBOR+60 bps. The position is then funded at say LIBOR+25 bps. Investor net credit spread is, therefore, 35 bps (60- 25). If the same risk is taken through CDS for a net spread of 30 bps, an asset swap is more favorable.

Key Risks Faced by an Investor in Asset Swap

Here are the risks which are faced by an investor.

Such investor is looking to earn an appropriate spread for the risk of bond issuer default. Investor normally compares the spread available from this swap to those available from equivalent risk FRN or Credit default swap.

The asset swap investor buys an illiquid package investment. There is no quoted market price of such a swap. The only realistic way to liquidate it is by terminating the swap at a mark to market value and selling the bond. However, there is no guarantee that the terms of such unwind will yield desirable results.

This risk is negligible for investment-grade asset swap and is real for high yield transactions. The default of the bond could leave the swap investor to unwind the transaction on terms that cannot be predicted in advance.

It is the risks that market credit spread may tighten or widen in response to changing the market view on the default of the issuer or rating change on the instruments.

Margin requirement brings another set of risks to asset swap investors. Change in OIS and LIBOR curve result in margin movements that should approximately offset by changes in interest rate sensitivity of bonds. However, the change in the value of swaps is monetized (through margin payments), but any change in bond value is unrealized. This can leave the swap investor to negative mark to market on the swap, which is offset by an unrealized gain on bonds.

Asset Swap is the combination of bond purchase and fixed Interest rate swap. This swap is not a distinct product but a set of products defined by the motivation behind the transaction.

This has been a guide to what is an asset swap. Here we discuss the example and motivation of asset swap with key risk faced by investors along with advantages and disadvantages. You can learn more about financing from the following articles –