What is Debt/Equity Swap?

How Does Debt/Equity Swap Work?

When a company faces a serious financial crisis or is near to the situation of liquidation, then the company is not in a position to repay its debt. In such a situation, the company has to find ways of its financial restructuring. One of the ways for the same is an option for a debt-equity swap.

In the debt/equity swap, debt will be exchanged for equity. Thus, the company will offer the lenders to get the outstanding amount converted into the equivalent amount of equity shares of the company. The shares are issued in lieu of the outstanding debt in accordance with the pre-determined ratio. The company is saved from immediate cash flows arising due to repayment. 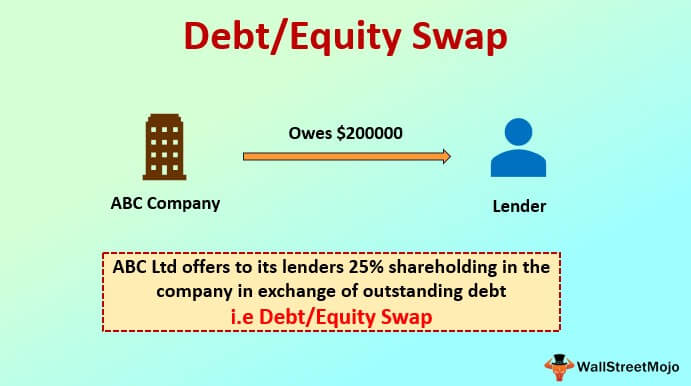 The situation of debt/equity swap can be well understood by way of the following example.

Let us say, a company ABC Ltd was facing a financial crisis, and it owes to its lender a total amount of $2,00,000. ABC Ltd offers to its lender 25% shareholding in the company in exchange for the existing amount of outstanding debt.

This is a situation of debt/equity swap wherein the borrower asks its lender to exchange the existing debt for equity.

Basically, a company opts for debt/equity when it is into long term financial problems. In such a case company knows that it will not be able to make the repayment of its outstanding debts, which will bring negative publicity for the company. In order to avoid such negative publicity, the company plans financial restructuring by way of debit/ equity swap wherein it offers the debt holders to exchange the debt for equity so that it does not have to make repayments. Thus, a debt/equity swap helps the company in the sense that it is not required to make immediate repayments, and financial stress is reduced to this extent.

A debt/equity swap offers the following benefits to the company.

On the other side, restructuring by way of a debt/equity swap incurs the following disadvantages.

This has been a guide to what is Debt/Equity Swap. Here we discuss how does debt to equity works along with an example, reasons, advantages, and disadvantages. You can learn more about financing from the following articles –