A swap rate is a rate, the receiver demands in exchange for the variable LIBOR or MIBOR rate after a specified period and hence it is the fixed leg of an interest rate swap and such rate gives the receiver base for considering profit or loss from a swap.

The swap rate in a forward contract is the fixed-rate (fixed interest rate or fixed exchange rate) that one party agrees to pay to the other party in exchange for uncertainty related to the market. In an interest rate swap, a fixed amount is exchanged at a specific rate with respect to a benchmark rate such as LIBOR. It can be either plus or minus of spread. Sometimes, it may be an exchange rate associated with the fixed portion of a currency swap. 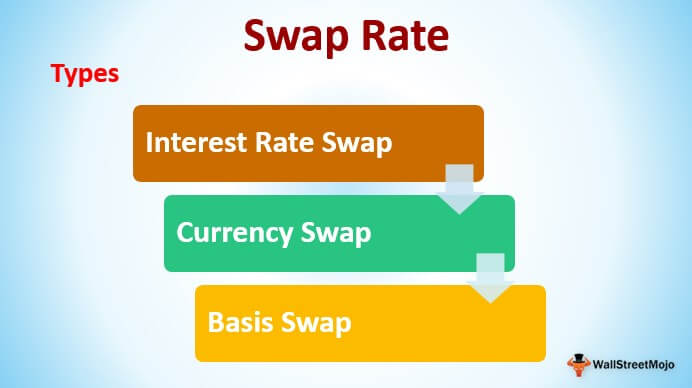 Swaps in finance are basically of three types:

Interest rate swap is where cash flows are exchanged at the fixed rate in reference to the floating rate. It is an agreement between two parties in which they have decided to exchange a series of payment between them. In such a payment strategy, a fixed amount will be paid by the one party and the floating amount will be paid by another party at a certain period of time.

It is a swap in which the cash flows of one currency are exchanged for the cash flow of another currency, which is almost similar to the interest swap.

It is the rate that is applicable to the fixed payment leg of the swap. And we can use the following formula to calculate the swap rate.

With respect to change in time, fixed leg rate, and floating leg rate changes with respect to time that was initially locked. The new fixed rates corresponding to the new floating rates is termed as the equilibrium swap rate.

The mathematical representation as follows:

If we consider an example in which you negotiate a 2% pay fixed, in reverse receive a floating swap at a variable rate to convert 5-years $200 million loans to a fixed loan. Evaluate the value of swap after one year, given in the following floating rates present value factor schedule.

The calculation of the swap rate formula will be as follows, 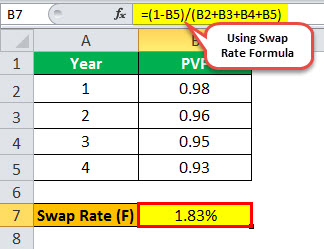 The equilibrium fixed swap rate after one year is 1.83%

The calculation of the equilibrium swap rate formula will be as follows, 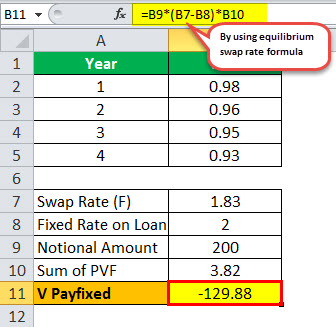 There are basically two reasons why companies want to engage in swaps:

Interest swaps are associated with huge risk, which we have specified below:

They could be a great means for a business to manage outstanding loans.  And the value behind them is the debt that can be either fixed or floating rate. They are usually performed between large companies to meet the specific financing requirements that could be a beneficial arrangement to meet everyone’s requirements.

This has been a guide to what Swap Rate is and its definition. Here we discuss the types of swaps along with examples, advantages, and disadvantages. You may learn more about risk management from the following articles –