What are the Current Liabilities?

Current Liabilities on the balance sheet refer to the debts or obligations that a company owes and is required to settle within one fiscal year or its normal operating cycle, whichever is longer. These liabilities are recorded on the Balance Sheet in the order of the shortest term to the longest term. The definition does not include amounts that are yet to be incurred as per the accrual accounting. For example, the salary to be paid to employees for services in the next fiscal year is not yet due since the services have not yet been incurred. 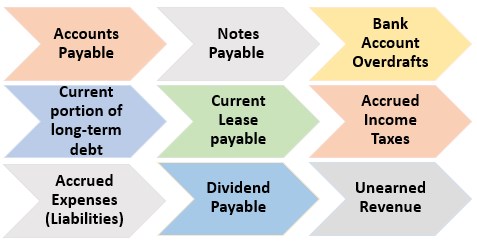 Accounts Payable is usually the major component representing payment due to suppliers within one year for raw materials bought, as evidenced by supply invoices. Here is the example

Short term advances made by the banks to offset account overdrafts due to excess funding above the available limit. Also, have a look at the revolving credit facility

Lease obligations due to the lessor in the short-term

Income Tax owed to the government but not yet paid

We note from above that Colgate’s accrued income tax was $441 million and $277 million, respectively.

Expenses not yet payable to the third party but already incurred like interest and salary payable. These accumulate with time. However, they will get paid when they become due. For example, salaries that the employees have earned but not been paid is reported as accrued salaries.

Facebook’s accrued liabilities are at $441 million and $296 million, respectively.

Dividends payables are Dividend declared, but yet to be paid to shareholders.

Unearned revenues are advance payments made by customers for future work to be completed in the short term like an advance magazine subscription.

Current liabilities on the balance sheet impose restrictions on the cash flow of a company and have to be managed prudently to ensure that the company has enough current assets to maintain short-term liquidity. In most cases, companies are required to maintain liabilities for recording payments which are not yet due. Again, companies may want to have liabilities because it lowers their long-term interest obligation.

Current Liabilities on the balance sheets are also used to calculate liquidity ratios like the current ratio and quick ratio. These ratios are calculated as follows:

Why Are Current Liabilities higher in the Retail Industry?

For the retail industry, the current ratio is usually less than 1, meaning that current liabilities on the balance sheet are more than current assets. 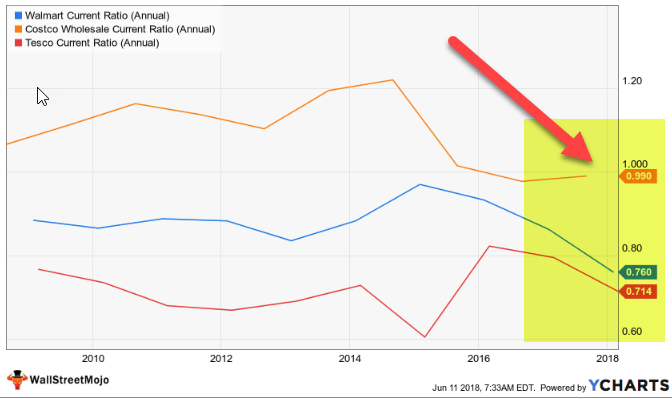 Most Balance sheets separate current liabilities from long-term liabilities. It gives an idea of the short-term dues and is essential information for lenders, financial analysts, owners, and executives of the firm to analyze liquidity, working capital management, and compare across firms in the industry. Being a part of the working capital, this is also significant for calculating free cash flow of a firm.

This article is a guide to what is Current Liabilities and its definition. Here we provide the list of current iliabilities along with practical examples and best ways to analyze current liabilities, the working capital, and the liquidity ratios like current ratio and quick ratios. You may also have a look at these following recommended articles on accounting basics –