Most Common examples of long-term liabilities include

We will discuss each of the examples of long term liability along with additional comments as needed.

Most Common Examples of Long-Term Liabilities 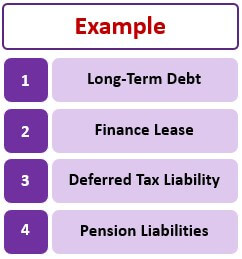 Apart from the simpler concept of bank loans, long term debt also includes bonds, debentures, and notes payable. These may be issued by corporates, special purpose vehicles (SPVs), and governments. Some bonds/debentures may also be convertible to equity shares, fully or partially. The terms of such conversion shall be specified at the time of the issue.

Long-term debt may be either secured i.e., backed by collateral or unsecured.

A lease contract is termed as a finance lease, also known as a capital lease if it fulfills any of the following capital lease criteria:

For lease contracts of over one year, the lessee records a long-term liability equaling the present value of lease obligations. A fixed asset of equivalent value is also recorded in the lessee’s balance sheet.

Owing to the difference between accounting rules and tax laws, the pre-tax earnings on a company’s income statement may be greater than the taxable income on its tax return. It is because accounting is done on an accrual basis, whereas tax computation is on a cash basis of accounting. Such a difference leads to the creation of deferred tax liability on the company’s balance sheet.

Deferred tax liabilities are thus temporary differential amounts that the company expects to pay to tax authorities in the future. At a later date, when such tax is due for payment, the deferred tax liability is reduced by the amount of income tax expense realized. The cash account is also reduced accordingly.

Pension obligations give rise to liabilities in case of defined benefit plans only, where the employer (company) promises to pay a specific amount to retired employees, based on their salaries, period of service, etc.

Consider the example of American pharmaceutical company Pfizer Inc. It contains Pension liabilities, in addition to debt and deferred taxes. Pfizer’s commitments under a capital lease are not significant (as mentioned in the annual report) and are thus not described separately here.

The pension liability is further detailed in the notes section (excerpt below). 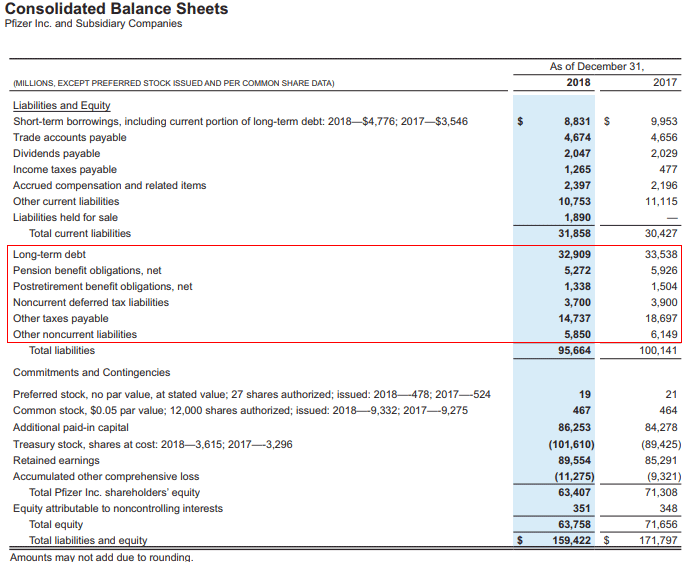 Different sources of funding are available to companies, of which long-term liabilities form an important portion. We often come across some or all of the types described above in balance sheets across industries. These are usually looked into as an integral part of financial analysis, especially for financial leverage and credit risk assessment.

It is also essential to understand the computation of such liabilities, their payment schedules, and any additional terms associated with each of them. Such details are available in the notes to accounts in annual reports.