Is Unearned Revenue a Liability?

Is Unearned Revenue a Liability?

In this article, we provide the top 3 reasons why unearned revenue is classified as a liability – 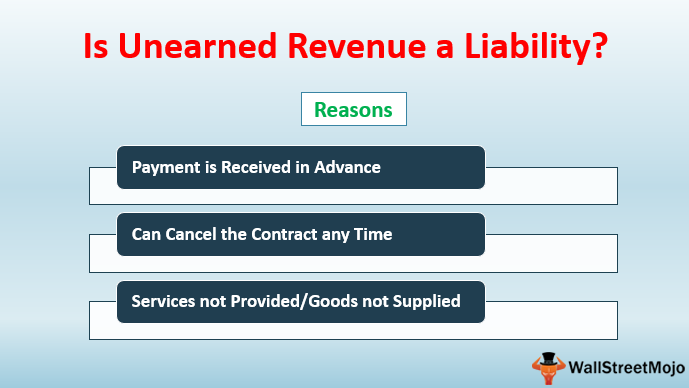 Reason #1 – Payment is Received in Advance

Mr. X uses amazon.com and recently he got to know about the prime services provided by amazon.com like unlimited access to the music and movies, free shipping of the products within two days period of time, etc. He wants to take benefit of the same so he purchased the annual subscription of the Amazon for $ 119. For this amount of $ 119, Amazon has to provide the service for a period of one year. Now for the Amazon, the amount received from Mr. X of $ 119 becomes the unearned revenue because the company receives the payment as an advance in full while no services have yet been provided to Mr. X.

Initially, a full amount of $ 119 will be recognized by the company Amazon.com as the unearned revenue in its balance sheet when the full amount has been received as an advance. However, at the first month’s end, the monthly portion out of the total amount which comes to $ 9.92 ($ 119 / 12) will be reduced from the portion of unearned revenue and will be recorded and treated as the revenue of the company. So at the first month’s end, the earned revenue out of Mr. X’s subscription will come to $ 9.92 and the unearned revenue that will be shown in the balance sheet of the company will come to $ 109.08 ($ 119 – $ 9.92).  The same procedure will be followed in each subsequent month till the end of the 12th month as after the last month; the last portion of the payment received from Mr. X will be recognized by the company as its revenue.

Reason #2 – Can Cancel the Contract any Time

Company X ltd produces and supplies sports equipment in one area. Mr. Y provided the advance to the company X ltd of $ 50,000 for the supply of certain sports equipment after one month. After the 15 days, Mr. Y asks the company to cancel the order. The company after receiving the cancellation request from the customer canceled the order and refunded the amount back to Y. So, in this case, Company X cannot recognize the amount received as advance as its revenue and has to show the same as its liability because when the order gets canceled then it is liable to refund back the advance amount to the customer.

Reason #3 – Services not Provided/Goods not Supplied

The company should recognize the revenue as the earned revenue once the goods have been supplied or the services have been rendered to the customers. In case the risk and rewards related to goods or services have not been transferred to the customer from the supplier then till that time the company should not recognize the revenue even if the amount has been received by the company against it.

Company B ltd. got the order to supply office equipment to Company C ltd after 2 months for which the advance payment received in full. Since the goods have not been provided to Company C so, risk and rewards related to the goods have not been transferred. Now the company will treat the advance amount received as its liability till the time the risk and rewards are transferred after which the entire advance will be transferred from unearned revenue to the earned revenue account.

Once the company delivers the product or provides the service to the company for which the amount is received in advance then the unearned revenue will become the revenue and will be considered as the income on the income statement of the company and will no more be a liability.

This has been a guide to Is Unearned Revenue a Liability?. Here we discuss the top 3 reasons for considering it as the liability along with examples and explanations. You can learn more about excel modeling from the following articles –