Weight for an EWMA reduces exponentially way for each period that goes further in the past. Also, since EWMA contains the previously calculated average, hence the result of Exponentially Weighted Moving Average will be cumulative. Because of this, all the data points will be contributing to the result, but the contribution factor will go down as the next period EWMA is calculated.

This EWMA Formula shows the value of moving average at a time t.

This formula states the value of moving average at time t. Here is a parameter that shows the rate at which the older data will come into calculation. The value of a will be between 0 to 1.

Below are the examples of Exponentially Weighted Moving Average

Let’s consider 5 data points as per below table:

EWMA for time 2 is as follows 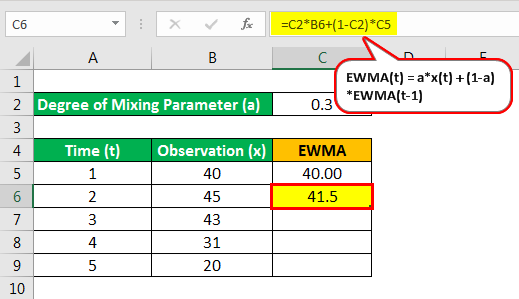 We are having the temperature of a city in degrees Celsius from Sunday to Saturday. Using =10%, we will find the moving average temperature for each day of the week.

Using a =10%, we will find an exponentially weighted moving average for each day in the below table: 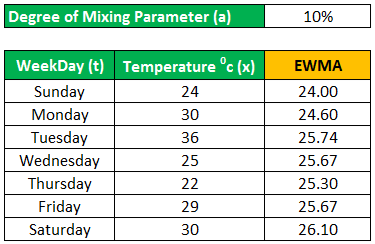 Below is the graph showing a comparison between the actual temperature and EWMA: 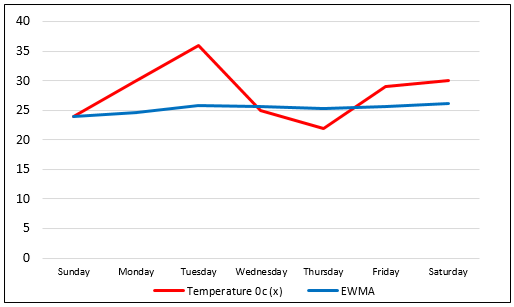 As we can see, smoothing is quite strong, using =10%. In the same way, we can solve the exponentially weighted moving average for many kinds of time series or sequential datasets.

EWMA is a tool for detecting smaller shifts in the mean of the time-bound process. An exponentially weighted moving average is also highly studied and used as a model to find a moving average of data. It is also very useful in forecasting the event basis of past data. Exponentially Weighted Moving Average is an assumed basis that observations are normally distributed. It is considering past data based on their weightage. As the data is more in the past, its weight for the calculation will come down exponentially.

Users can also give weight to the past data to find out a different set of EWMA basis different weightage. Also, because of the geometrically displayed data, data doesn’t get affected much because of the outliers. Hence more smoothed data can be achieved using this method.

This article has been a guide to EWMA (Exponentially Weighted Moving Average). Here we discuss its formula to calculate EWMA along with step by step examples to understand it better. You can learn more from the following articles –