What is a Profit Sharing Plan?

A profit-sharing plan is a defined contribution pension plan in which the workers and employees are given an opportunity to obtain their share in the overall profit of the organization in such a way that they are encouraged to contribute more and more to the profit of the organization and motivates to give their best efforts, thus it is an incentive plan that gives a variable benefit to the employees based on a certain percentage of profit.

This plan specifies a certain percentage of profits for every particular employee covered under the plan. Thus it is upon the company to decide how much profit will be shared with employees covered under a profit-sharing plan. Also, it is important to note here that only employers, company or the organization can contribute to this plan and not the employees.

This plan provided quarterly or annual incentives to the employees of the organization based upon the quarterly and annual returns, respectively. Further, employees can get their share in the profit of the organization either in the form of cash or the stock of the company wherein the contribution is provided to a qualified tax-deferred retirement account that allows a penalty-free distribution to the employees at a certain Pre defined age group. 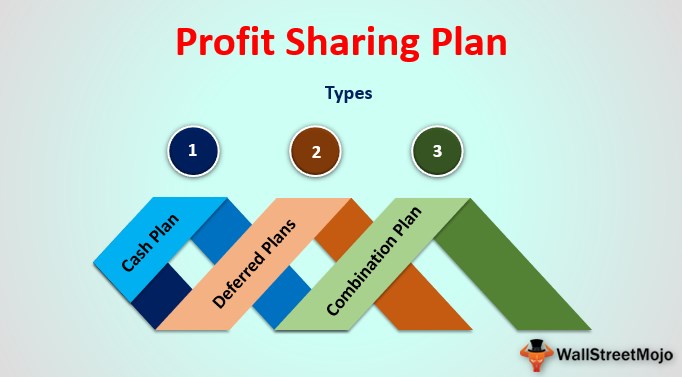 The employees covered under this plan are given with cash or stock of the organization or company at the end of every year or quarter as the case may be. Thus they are given instant results of their efforts in the organization. The main disadvantage of this type of plan is that the employees are taxed on this additional income as a regular income

Rules of a Profit-Sharing Plan

As discussed above, a profit-sharing plan is more and more considered in today’s world since it provides a win-win situation to the entire company. Thus this plan helps an organization to grow and achieve heights.

This has been a guide to what is the Profit Sharing Plan and its definition. Here we discuss three types of Profit-Sharing plans (Cash, Deferred, and Combination) along with their example and rules. You may learn more about Financing from the following articles –