What is Shark Repellent?

Shark repellent refers to strategies, mostly periodic or continuous, that target companies or public businesses, take in order to ward off the acquirer in case of a hostile or unwanted takeover.

In the competitive world of acquisitions, takeovers, and mergers, companies try to protect the interests of the business as well as the shareholders by employing certain measures that guard the companies against bigger or aggressive players that intend at hostile takeovers.

Shark repellent stems from the idea that a company’s actions seeking to take over other businesses are termed as shark attacks, and the company itself is termed as a predator. They are the defensive strategies or tactics that companies implement to deter the attacks.

How Does Shark Repellent Work? 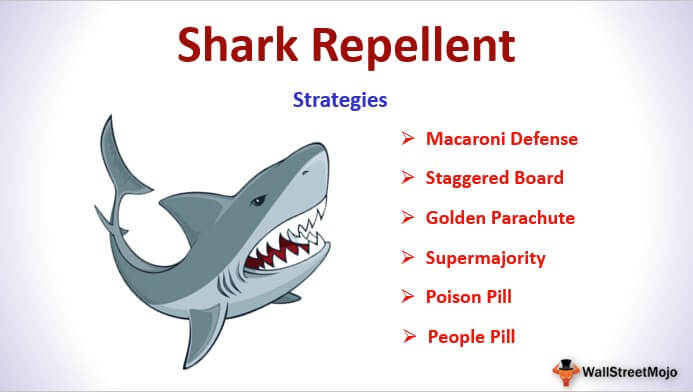 Businesses are in constant threat of hostile takeovers where one company, called the target, is acquired by another company, called the acquirer, without any mutual agreement. Hostile takeovers aim at replacing the target company’s management so that acquisition is approved. The defense strategies that are now popular have been the effects of historic takeovers and attempts to ward them off.

A classic real-world example of shark repellent defense is the White knight defense tactic. A leading electronics equipment maker, AMP, Inc., used this strategy against Allied Signal Corporation, which worked in the aerospace sector. Allied Signal Corp. made a $10 billion bid for taking over the AMP, Inc. As a defense, AMP, Inc; executives offered a friendly bid to be made by another company that could potentially avoid a hostile takeover by Allied Signal Corporation. This friendly bid was made by Tyco, Inc. The deal was a stock-for-stock swap, which had a total consideration of $11.3 billion.

Shark repellent strategies have proven to be warding off predators successfully. With each takeover attempt, the target company management comes up with strategic actions, and the most successful ones are recorded in history. Some popular tactics are macaroni defense, white knight, sandbag, golden parachute, and a poison pill. The history of mergers and acquisitions has evolved with every successful or unsuccessful deal that happens in the market. Management teams use shark repellents to fight off acquisition or a takeover attempt, but the real interest of shareholders, rather all stakeholders, is not addressed all the time.

This has been a guide to what is Shark Repellent. Here we discuss practical examples and how does shark repellent works along with advantages and disadvantages. You may learn more about financing from the following articles –