Convexity of a Bond

What is the Convexity of a Bond?

Convexity of a Bond is a measure that shows the relationship between bond price and Bond yield, i.e., the change in the duration of the bond due to a change in the rate of interest, which helps a risk management tool to measure and manage the portfolio’s exposure to interest rate risk and risk of loss of expectation

As we know, the bond price and the yield are inversely related, i.e., as yield increases, the price decreases. However, this relation is not a straight line but is a convex curve. Convexity measures the curvature in this relationship, i.e., how the duration changes with a change in yield of the bond.

The duration of a bond is the linear relationship between the bond price and interest rates, where, as interest rates increase, bond price decreases. Simply put, a higher duration implies that the bond price is more sensitive to rate changes. For a small and sudden change in bond, yield duration is a good measure of the sensitivity of the bond price. However, for larger changes in yield, the duration measure is not effective as the relationship is non-linear and is a curve. There are four different types of Duration measures, namely Macaulay’s Duration, Modified Duration, Effective duration, and Key rate duration, which all measure how long it takes for the price of the bond to be paid off by the internal cash flows. What they differ is in how they treat the interest rate changes, embedded bond options, and bond redemption options. They, however, do not take into account the non-linear relationship between price and yield. 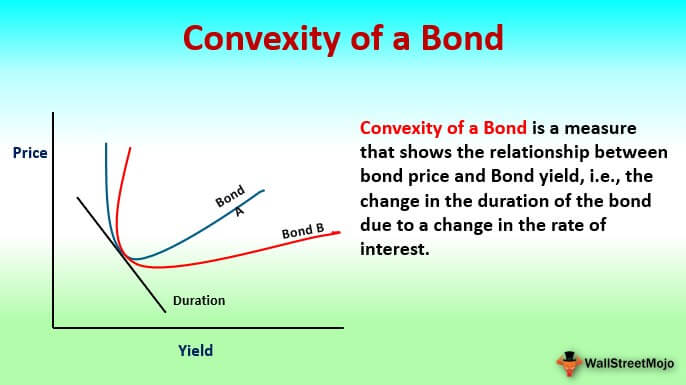 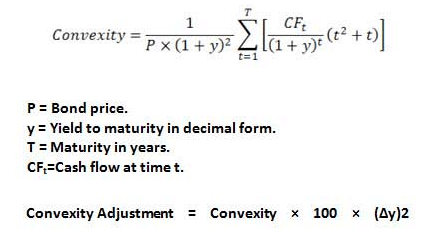 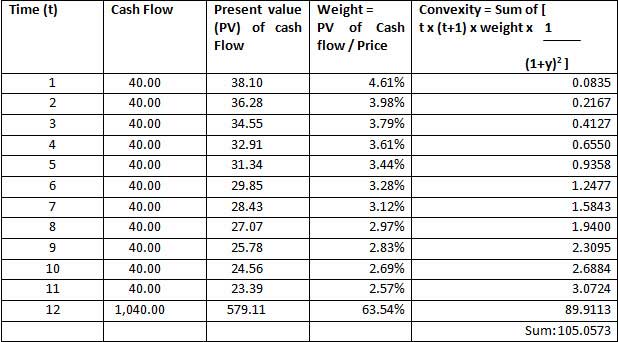 In the above example, a convexity of 26.2643 can be used to predict the price change for a 1% change in yield would be:

If the only modified duration is used:

To accommodate the convex shape of the graph, the change in price formula changes to:

This shows how, for the same 1% increase in yield, the predicted price decrease changes if the only duration is used as against when the convexity of the price yield curve is also adjusted.

As seen in the convexity calculation can be quite tedious and long, especially f the bond is long term and has numerous cash flows.   The formula for convexity approximation is as follows:

As can be seen from the formula, Convexity is a function of the bond price, YTM (Yield to maturity), Time to maturity, and the sum of the cash flows.  The number of coupon flows (cash flows) change the duration and hence the convexity of the bond.  The duration of a zero bond is equal to its time to maturity, but as there still exists a convex relationship between its price and yield, zero-coupon bonds have the highest convexity and its prices most sensitive to changes in yield. 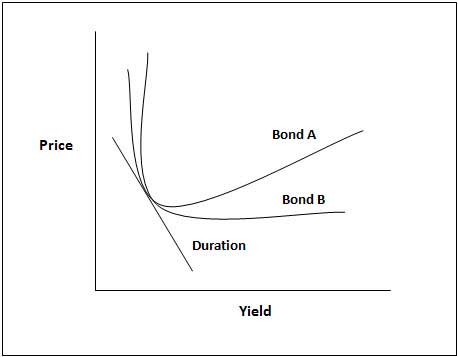 In the above graph, Bond A is more convex than Bond B even though they both have the same duration, and hence Bond A is less affected by interest rate changes.

Convexity can be positive or negative. A bond has positive convexity if the yield and the duration of the bond increase or decrease together, i.e., they have a positive correlation. The yield curve for this typically moves upward. This type is for a bond that does not have a call option or a prepayment option. Bonds have negative convexity when the yield increases, the duration decreases, i.e., there is a negative correlation between yield and duration, and the yield curve moves downward. These are typically bonds with call options, mortgage-backed securities, and those bonds which have a repayment option. If the bond with prepayment or call option has a premium to be paid for the early exit, then the convexity may turn positive. 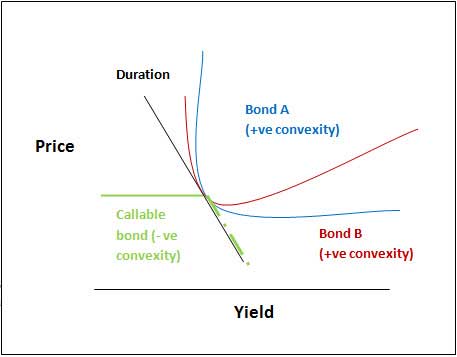 Convexity of a Bond Portfolio

For a bond portfolio, the convexity would measure the risk of all the bonds put together and is the weighted average of the individual bonds with no bonds or the market value of the bonds being used as weights.

Even though Convexity takes into account the non-linear shape of the price-yield curve and adjusts for the prediction for price change, there is still some error left as it is only the second derivative of the price-yield equation. To get a more accurate price for a change in yield, adding the next derivative would give a price much closer to the actual price of the bond. Today with sophisticated computer models predicting prices, convexity is more a measure of the risk of the bond or the bond portfolio. More convex the bond or the bond portfolio less risky; it is as the price change for a reduction in interest rates is less. So bond, which is more convex, would have a lower yield as the market prices in lower risk.

Risk measurement for a bond involves a number of risks. These include but are not limited to:

Convexity arises due to the shape of the price-yield curve. If the market yield graph were flat and all shifts in prices were parallel shifts, then the more convex the portfolio, the better it would perform, and there would be no place for arbitrage. However, as the yield graph is curved, for long-term bonds, the price yield curve is hump-shaped to accommodate for the lower convexity in the latter term.

Finally, convexity is a measure of the bond or the portfolio’s interest-rate sensitivity and should be used to evaluate investment based on the risk profile of the investor.