What is Homemade Dividend?

In simple words, it is the cash flow created by the investor himself by selling a portion of his portfolio. Investors may have cash flow objectives. To meet these objectives, the investor can either get the traditional dividend from the Company or sell a percentage of his shares/ownership to generate the cash flow. 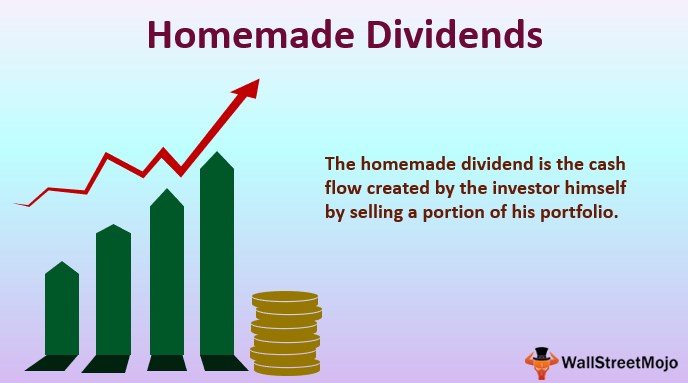 This theory suggests that the investor is indifferent to the dividend policy of the Company and can sell the shares to generate the required income. This is supported by the argument that when a firm declares a dividend, the stock price of the Company decreases by the same amount as the dividend after the ex-dividend date. Thus, it does not make a difference if the investor sells the stock before the dividend is announced or after the ex-dividend date as it neutralizes any financial gains.

However, this may not be true in the real world. When an investor sells a portion of its portfolio or shares in a Company, he is left with fewer shares for a short-term monetary gain. Further, the dividend irrelevance theory only holds true if there are no taxes, no brokerage and shares are infinitely divisible, which is not the scenario in the real world.

Let us consider the following examples:

Let us see when the Company has declared the dividend.

Let us consider another example where a Company has paid the dividend, but it is not sufficient for the investor.

This is the form of generating regular income by selling a part of one’s portfolio. This is done to maintain expected income, which is not generated by the Companies due to insufficient or no dividend at all.

In theory, the investor may be indifferent from the dividend policy of the Company and may generate an income equivalent of a dividend-paying company. But once we include brokerage fees, taxes, the future growth potential of the stock homemade dividends may not be as effective as traditional dividends.

This has been a guide to what are Homemade Dividends? Here we discuss homemade dividends examples along with challenges and disadvantages of the same. You may learn more about Accounting from the following articles –