Special dividend, also known as extra dividends or non-recurring dividends,  refers to the declaration and distribution of an amount which is in addition to the regular dividend and is usually given when the company receives large windfall from asset sales or other one-time events.

The amount of special dividend is paid out of companies’ disinvestment or sale of fixed assets of the company. That is why the amount of dividend seems to be very high as compared to the regular dividend as it is one time or non-recurring payments made by the company. The company finalizes its decision by conducting a board meeting. It decides the amount or percentage at which the dividend is to be declared and paid to the shareholders. 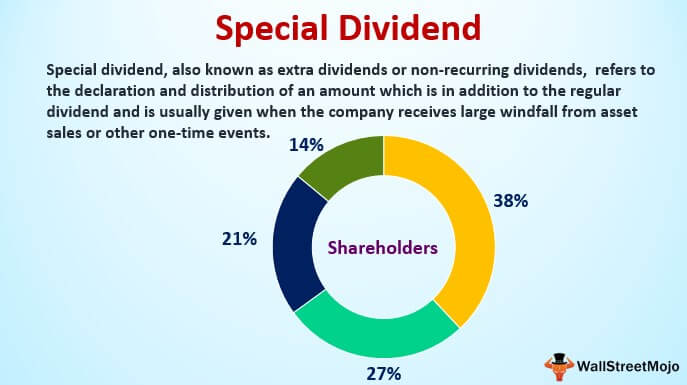 Generally, it is seen that the company at first declares the dividend then records the same in the books. And after that, pays it to the shareholders of the company. In this case, the shareholder who is holding shares on the record date will receive the dividend, whether he is a shareholder or not on the date of payment. However, in case of a special dividend, anyone who is holding shares on the declaration date will receive a dividend. The rules and guidelines are much easier as compared to the regular dividend.

Step #1: The basic and preliminary step to declare any kind of dividend is to analyze the position of business net profits.

Step #2: After that, if the management wants to declare dividends, then they have to conduct a board meeting to vote upon and finalize the decision.

Step #3: While deciding the amount or percentage to be declared as dividends, one must also analyze the industry norms and patterns in which the entity operates.

Step #4: Finally, declare and distribute the amount of special dividend to the shareholders of the company.

The amount to be paid is $(50,000,000 * 1) i.e. $50,000,000. The company at first makes provision or transfer the due amount to the payables amount from the total reserves and surpluses available with the company. After that, the same would be paid to the shareholders of the company from such a provided or transferred account. After payment of such a dividend amount, the balance remaining in the payable account would be zero as the provided amount was paid to the shareholders of the company.

On 1st January 2020 the following entry is to be passed:

On 15th January 2020 the final entry of payment is to be passed:

When a company wants to make a distinctive image in the market and has also earned profits above the expectations of the management, they decide to distribute some amount as a special dividend to shareholders. It also creates a good mindset about the company’s financials, as seen from the perspective of shareholders and lenders of the company. It’s a one time amount declared by the company to the shareholders.

This article has been a guide to Special Dividend and its Meaning. Here we discuss how does special dividend works, its journal entries along with its rules, advantages, disadvantages, and reasons. You can learn more about financing from the following articles –