Surtax is an extra amount of tax that is charged upon the already existing income tax to fund a specific program of the government and this can be a percentage of a certain amount or a flat dollar rate which individuals are bound to pay. 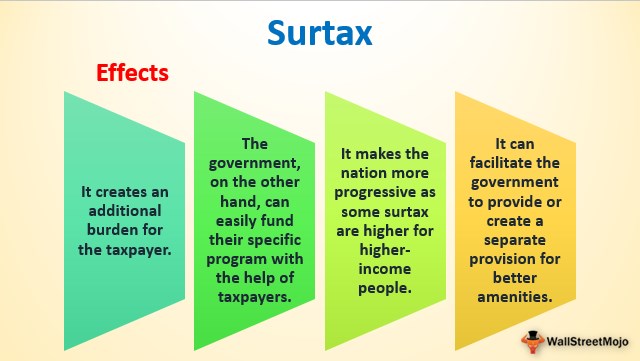 The various effects are as follows:

In the US, Surtax was originally introduced at a 10% rate for all taxpayers above their regular tax rate by the President in 1968 to support the Vietnam War. At present, it is more progressive considering the US a developed nation where the Surtax is charged based on income, which means a higher income individual will end up paying more tax than a lower bracket individual. A person who falls under 20% bracket of income tax is being charged 10% over it, which takes the effective tax rate to 22% overall, and a 50% bracket individual has to shell out again an overall effective tax of 55%.

The US has also introduced a sales surtax rate, which varies from state to state and is generally between 0.5% to 1.5%. These rates are generally charged to small counties on and above the general tax rate.

Several advantages are as follows:

The disadvantages are as follows:

Surtax has both advantages and disadvantages considering the level of income and usage for which it is being raised. Such tax, which is raised for better amenities or medicare, can be considered a boon for the citizen since all are liable to gain benefits out of it.

This article has been a guide to Surtax and its meaning. Here we discuss examples, effects, and rate of Surtax along with advantages and disadvantages. You may learn more about financing from the following articles –