The process that involves selling and buying of an entity’s assets that comprise of more than the half of the target entity’s consolidated assets is known as Asset Restructuring and it is basically the expenditure for the onetime which is required to be financed by any entity when any restructuring is expected to take place.

Asset Restructuring is the process of buying or selling of a company’s assets that comprise of far more significant than half of the target company’s consolidated assets. It’s usually a one-time expense that needs to be funded by any company when the restructuring takes place. Asset restructuring is a cost that may occur during the entire process of strategically writing off its assets or sometimes shifting the entire production facility to any new location, shutting down the manufacturing facilities, and uniquely laying off all the non-strategic employees.

Very recently, Toshiba announced its plan to split its four in-house companies into wholly-owned subsidiaries signaling that it may completely get out of the business of making nuclear plants.

Several companies have successfully developed the restructuring wings and authorities in many countries. Several MNCs in various nations are keenly involved in this herculean task and are strategically devising the process of asset restructuring. 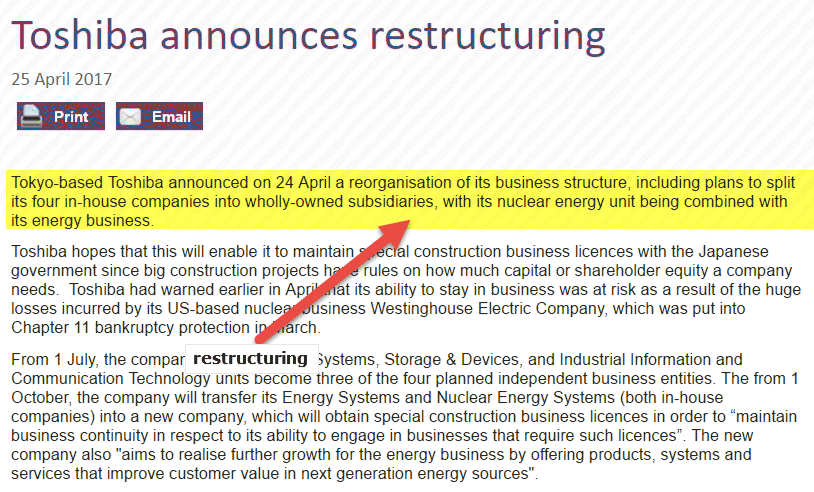 Normally, people take a loan from banks while purchasing any immobile property. Several banks lend money to them without making proper background verification of the customers whether they would repay the loan amount with interest within the stipulated period or their creditworthiness. Hence, the chances of the loan going bad increases significantly and thus might harm these financial institutions by increasing their fiscal debts.

Therefore, the concept of asset restructuring developed for checking such frauds and provide appropriate repair if sudden fiscal loss appears. By such actions, several frauds were successfully prevented and uniquely addressed with a significant fall in fraudulent and criminal activities was noticed. Also, multiple lending frauds could even be prevented by a robust asset restructuring mechanism. Several companies are operational on the key project, and the same concept has successfully been implemented across several countries.

Asset restructuring could be implemented due to a variety of reasons including, targeting the organization to become more competitive, successfully survive and emerge stronger from the existing hostile economic environment, or position the company to move towards an entirely new direction.

There’s a wide range of restructuring available, as shown in the diagram below: 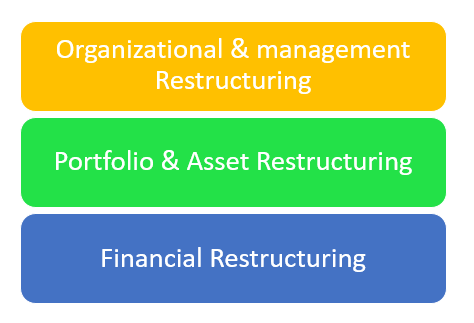 Asset restructuring also involves a well-planned sale of intangible or tangible assets of the target company for generating cash.

Restructuring of assets could also take the form of a divestiture or a well-planned divestment that comprises of the assets sales of the company, or brand, or divisions or product lines to the third party.

It can also be termed as an acquisition in reverse.

Sell-off could also be a part of the asset restructuring process, with the company selling a portion of its non-core business to any agreed-upon third-party. It could be considered a normal practice by several huge companies for selling off or divesting their less profitable or non-profitable businesses to avoid any further pressure on its key resources.

Many times the company might trade-off their lucrative but non-essential businesses to generate enough liquidity for continuing with its daily operations profitably.

Apart from the positive and favorable results of this asset restructuring program, there are also certain byproducts of the operation such as a one-time item, which is generally an accounting term in any organization’s income statement, which is believed to be non-recurring by nature. Further, for getting the right evaluation on any company’s financial performance, one-time elements are normally excluded by investors and analysts while accurately examining any company. One-time elements usually impact any company’s earnings from operations; however, it may sometimes have a healthy impact.

The process of asset restructuring definitely incurs some costs to the company including, the costs related to the writing off of the assets, minimizing or removing service or product lines, discarding agreements, removing divisions, and shutting down the facilities. Further, purchasing some key property adds to the overall asset restructuring costs.

A one-time expense that needs to be funded by any organization when it goes through asset reorganization or restructuring. The restructuring charge might be incurred while writing off non-core assets or shifting the entire production facility to another location, shutting down the manufacturing facility, and laying off its employees to reduce costs. 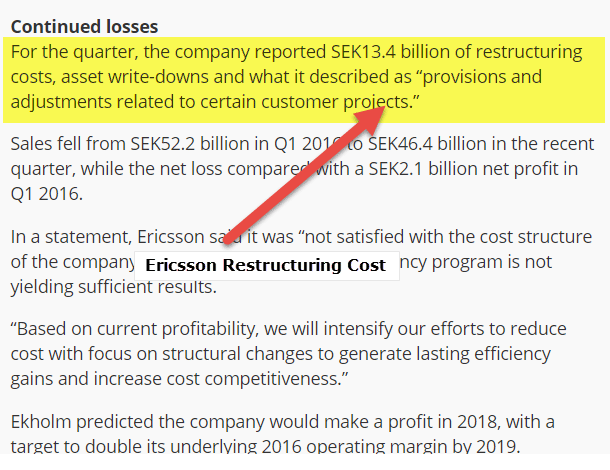 Asset restructuring is a type of operational restructuring where a company’s assets might be strategically bought or sold off. That completely depends on the entire process of expanding the economic feasibility of the core business model. Some examples include abandonment of non-core product lines or sale of non-strategic and non-profitable divisions, well-planned mergers, or cost optimization efforts such as shutting down non-profitable facilities. Asset restructuring is mostly being performed by the companies under major bankruptcy and turnaround situations for saving the business.

How does Asset Restructuring work?

Asset Restructuring might involve new capital, new management, and any new prospect for rethinking the business plan and organization. Fruitful asset restructuring would usually lead to a higher company’s valuation.

Let’s take some examples for getting some clarity on Asset Restructuring:

Example 1: Assume a bank is having some old furniture and a traditional locker with it, which is of no use to the bank because it could be treated as non-performing assets or NPA. Now, the top management of the bank decides to sell it off at some predetermined price. It would allow the bank to get rid of such NPAs while making some money from it, which was already of no use to the bank.

However, one must keep in mind a few points about accounting entries to be made while selling any fixed assets including,

Example 2: Consider a calculator being originally bought for $100 while simultaneously depreciated for straight 5 years in a row by applying the straight-line depreciation method and having a salvage value of $0. The ledger entries after 2 years would appear like this:

Currently, the decision is to sell the calculator for $80. Further, the entries must be made in the manner that nullifies the accumulated and equipment depreciation accounts as they would cease to exist after the transaction. Also, one must also consider accounts receivable or cash that is currently available owing to the sale. The journal entries for the same appears as follows:

But, these credits and debits don’t match. It can be corrected by introducing another account referred to as Gain (Loss) on the Disposition of Assets or like. A credit entry is treated as a Gain (such as Revenue), and a debit entry treated as a Loss (such as Expense). For this case, a credit entry of $20 is illustrated below:

Now, let’s see the impact on the Cash Flow Statement. We observe that the net value of entire fixed assets would get reduced across the company’s balance sheet (being a cash source), and we have grown the overall cash account. It illustrates the transaction’s cash flows.

Another effect includes the Net Gain (Loss) on asset’s disposition, which is again a non-cash activity that surfaces on the company’s combined income statement, whereas it reduces or surges taxable income. Likewise, Depreciation Expenditure is a non-cash activity that lowers or expands Net Income Before Taxes (NBIT) beyond limits. Finally, the consolidated income statement appears as follows:

Why is Asset Restructuring Important?

A strategically restructured company, mainly through asset restructuring, is at least tentatively, more profitable, more efficient, and more focused on its operations. But, asset restructuring could impact and might even weaken the existing stockholder’s stock values.

The primary objective of asset restructuring is to improve shareholder value.

Besides this, several other reasons include,

There could be an accelerated change in technology and globally expanding competitive pressures due to huge foreign competition.

The management might decide to go for asset restructuring of the company for keenly focusing on major competencies through strategic divestment of non-core businesses while these attractive disinvestments could deliver impressive valuations.

Every company does perform certain asset restructuring operations to get rid of its non-performing assets (NPAs) and to improve their financial position while making their balance sheets attractive for the investors. Therefore, through the process of “Asset Restructuring,” companies often avoid making vast piles of non-performing assets while enhancing cash on their balance sheets.