Spin off vs Split Off

Separation is never easy. It brings along a plethora of emotions ranging from grief and angst to relief and freedom. Akin to human lives, corporate entities also go through various phases of restructuring, which sometimes calls for separation. But it is imperative that the separation happens for the right reasons; only then will the companies reap benefits.

In this article, we discuss the Spin-Off and Split Off in detail.

Divestment or Divestiture is a phenomenon in the corporate landscape that entails partial or full disposal of the business unit with the intention of focusing on the more profitable or core models. As companies climb up the growth trajectory, managing diverse business lines become quite challenging, and hence pruning the portfolio becomes an obvious choice. Some of the other reasons that justify divestiture are financial issues or to exploit the full potential of each entity as opposed to the consolidated entity. 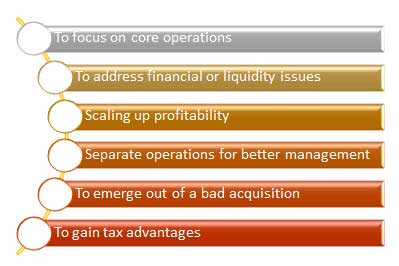 Divestitures can take various forms like Spin-off, Split-off, and Equity carve-out; however, it all depends on the reason for corporate restructuring. Usually, the business lines that are divested are the ones that have the least synergies with the parent company.

What is Spin off?

Once the subsidiaries are freed from the control of the parent company, one can see fresh streaks of entrepreneurship at play. The independent new company usually operates with more accountability and responsibility.

Examples of Spin off: 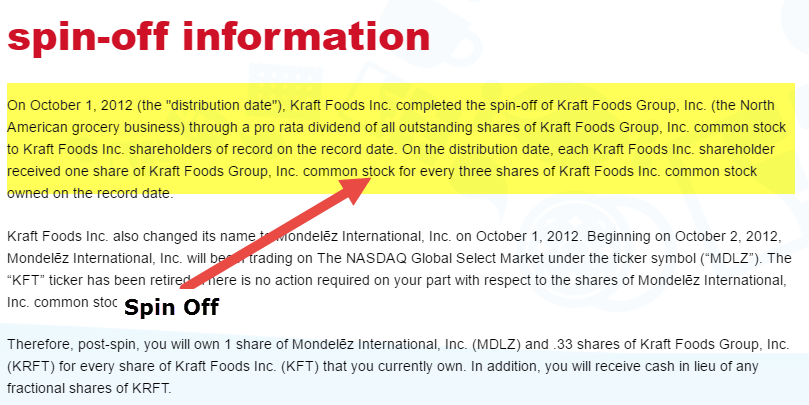 Possible Reasons: The snacks and confectionery business had a wider exposure to high-growth emerging markets while the grocery business was more North America oriented and stagnating. Therefore to exploit the best of both worlds and to manage two different segments in a focused way, this Spin-off was undertaken. 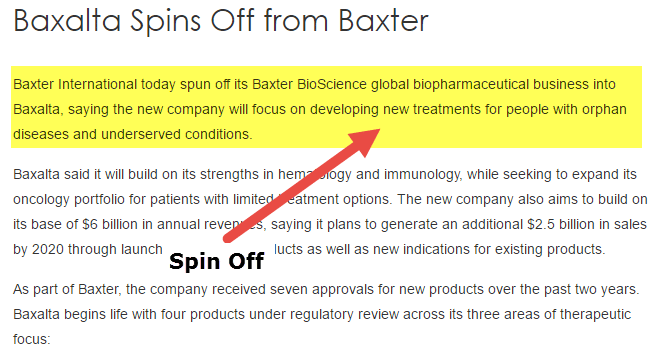 Possible Reasons: Both businesses operate in distinct markets and had different risk profiles. Baxter was primarily specialized as a medical supplies company, and the combination with Bioscience, a completely different portfolio, was making it difficult for operations and valuation. Therefore the management saw it in the best interest of the company to Spin-off the non-core arm.

Number of Completed Spin-Offs by Year 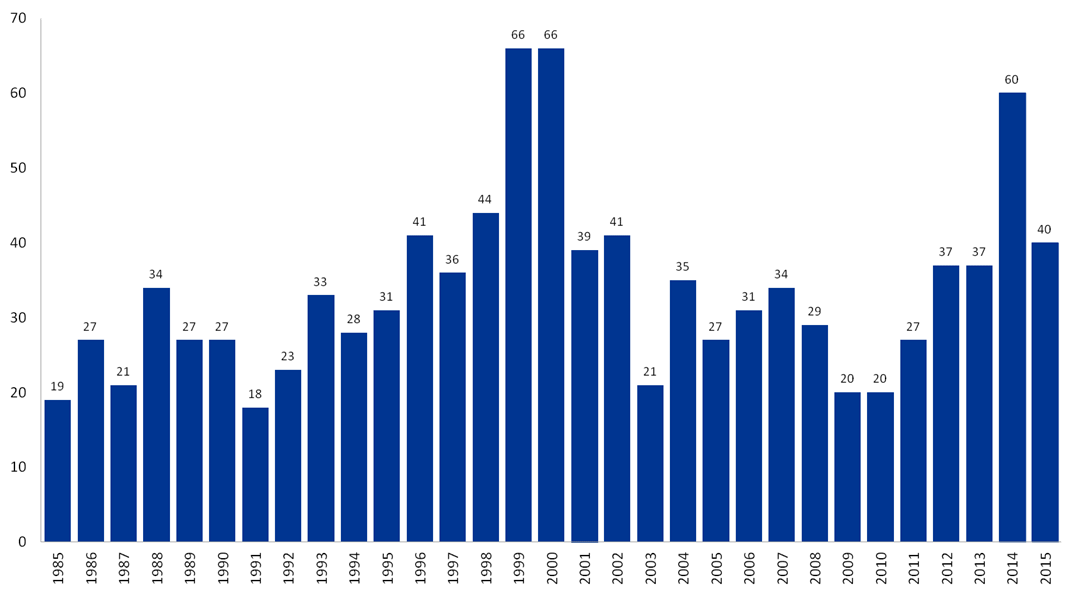 Due to a variety of reasons for restructuring and a plethora of reasons behind doing so, Spin-offs manifest itself in various forms. Some of the common ones are:

Pure Play is the most original form of Spin-off. This involves shareholders distributing shares of the subsidiary as a special dividend. Both companies have a common shareholder base.  This method is a stark contrast to an initial public offering (IPO), in which the parent company actually offloads some or all of its ownership in a division rather than just divesting it without any cash consideration. Pure Plays have gained momentum post-1990. The emerging competitive landscape motivates management to enhance operational efficiency and hone strategic decision-making skills.

Many people confuse Carve out with Pure Play. However, there are minor differences between the two. In Carve out, the parent company sells an interest of less than 20% in the new subsidiary, the public in a registered public offering (IPO) for cash proceeds instead of just existing shareholders. This is also known as a partial spin-off. When a corporation needs to raise capital, selling off a portion of a division while still holding control proves to be a win-win situation for the company. There are other motivating factors also behind a carve-out as well. Sometimes a company might feel that a particular division has hidden potential and might perform well once it is spun-off. A separate stock garners more attention and enables investors to value the business independently.

The Tracking stocks score some advantages (to the issuer) over spin-offs. Issuing them is a tax-free procedure, and if one of the two units undergo a financial loss, the earnings from one would make good the losses of the other for tax purposes.  If the parent company enjoys a higher credit rating, the Tracking stocks can reap the advantage of lower borrowing costs. The more the synergies between the parent and tracker, the higher the advantages. Basically, these stocks are issued with the sole purpose of gaining from the high stock prices of the parent.

When a company distributes shares in a subsidiary to the public while retaining ownership to some extent, it is known as a Partial Spin-off. Once the spun-off unit or the subsidiary becomes publicly traded, we can determine the market value of the investment of the parent company in the subsidiary.

Split offs: A distant cousin of Spin off

We spoke enough about Spin-offs, so now let us also shed some light on Split off, a distant cousin of Spin-off. Conceptually both are forms of divestiture, but there are differences between the corporate structures that reorganize themselves. Split-off means restructuring an existing corporate structure in which the stock of a business unit or a subsidiary is transferred to the shareholders of the parent company in lieu of stock in the latter. While on the other hand, in Spin-off stocks in a subsidiary are distributed to all existing shareholders, just like the dividend. 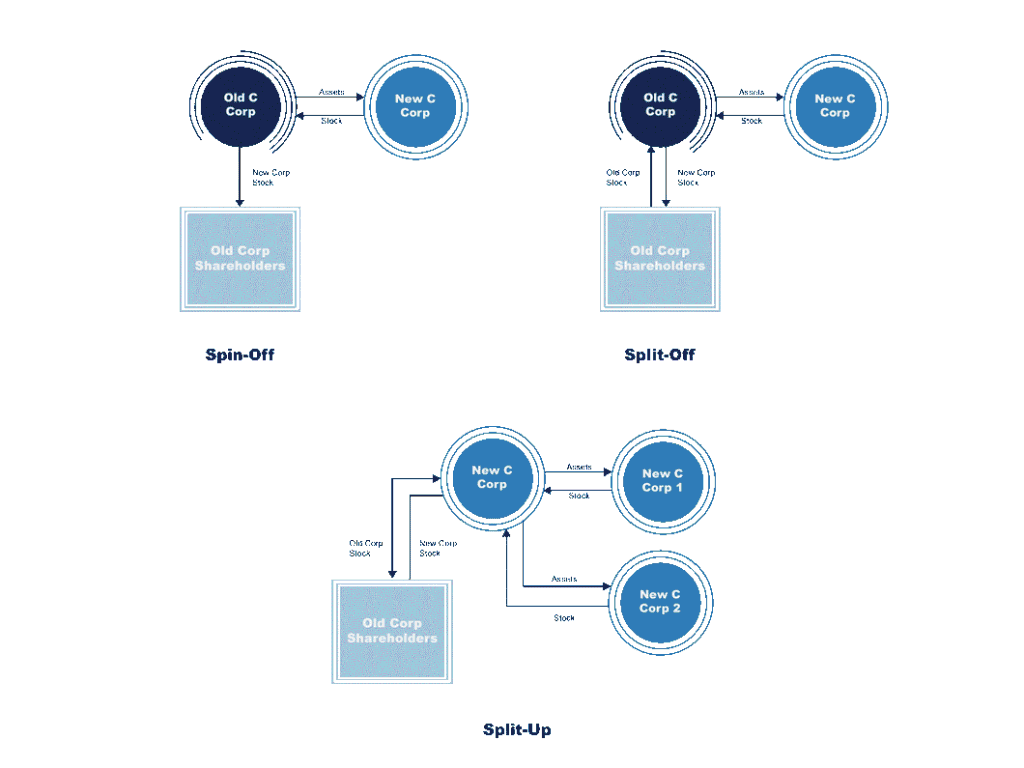 In a split-off, the parent company gives a Tender offer to its shareholders to exchange their shares for new shares of a subsidiary. This tender offer usually gives a premium in order to encourage existing shareholders to go for the offer. This privilege of “premium” tells why split-offs usually end up being oversubscribed.

If the offer is oversubscribed, it means that more of the Parent shares are tendered than that of the subsidiary. When the shares are offered, the exchange happens on a pro-rata basis. On the flip side, if the tender offer is under-subscribed, it means that too few shareholders of the parent company have accepted the tender offer. The Parent company will then usually distribute the remaining unsubscribed shares of the subsidiary on pro-rata through a spin-off.

In October 1998, Du Pont generated $4.4 billion from an initial public offering of 30% of the shares of its Conoco unit. DuPont, through this proposed stock swap, planned to divest itself of its remaining stake of 70% in Conoco. In 1999, the former then designed plans for a final split from its Conoco Inc. oil unit, offering to swap Conoco’s stock worth $11.65 billion for about 13% of DuPont’s shares outstanding. At that time, this IPO was touted to be one of the largest in history. 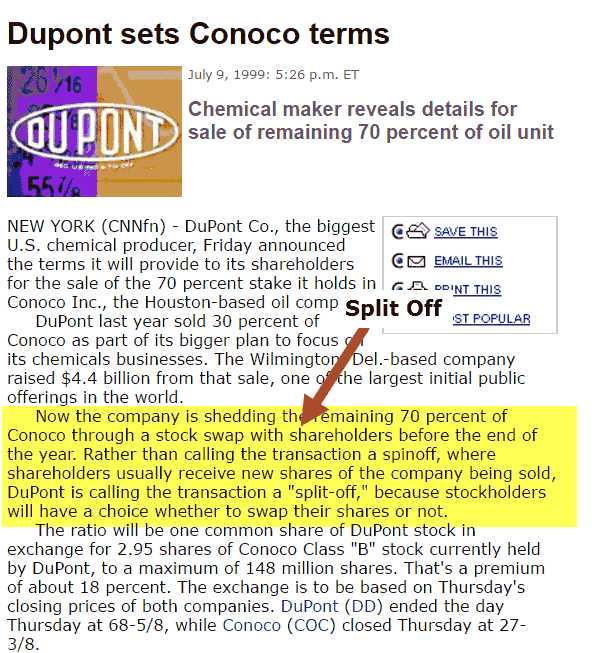 Possible Reasons: Conoco was a strong and steady contributor to DuPont’s revenue and cash flow, but Dupont felt it was in the best interests of both the companies to operate as separate entities and scale new heights. DuPont wanted to concentrate on its materials and life sciences business, while Conoco wanted to explore the imminent growth in energy markets.

Lockheed Martin Corp. announced plans to split off the 81% interest it was holding in Martin Marietta Materials Inc., a highway construction material producing company. This Split-off was aimed to provide Martin Marietta Materials immense opportunity to pursue its growth strategy and finance the acquisitions it has planned. As per the terms of the Split off deal, 4.72 shares of Materials Common Stock for each share of Lockheed Martin Common Stock were distributed by the latter.

Possible Reasons:  Lockheed was into a substantial debt pile, estimated around $13 million, and the move would generate enough cash to service the debt. Similarly, Martin Marietta Materials would be able to plan more inorganic growth through acquisitions and mergers.

Spin-offs have earned brownie points for being tax-free options. However, not always the case. Whether a split-off will be tax-free or with taxable is decided in a manner in which the parent company divests the subsidiary or a part of itself. The tax perspective is governed by Internal Revenue Code (IRC) Section 355. While financial viability is the key driving force behind Split-offs, it is also imperative that shareholders’ interest is taken care of.  Usually, divestiture attracts long-term capital gains, and hence the split-off has to be designed in such a way that they are tax-free.

One method to ensure that the distribution of shares in the new spin-off to existing shareholders indirectly proportional to their equity interest in the parent. E.g., If a stockholder has 3% holding in the parent company, his shareholding in the spin-off company will also be exact 3%.

In the second method, the parent company offers an option to the existing shareholders to exchange their shares in the parent company for an equal proportion of shares in the spinoff company or continue maintaining their holding in the company. Some also exercise the option of holding both the stocks. This is something on the lines of a Split-off.

Spin-off vs. Split Off Video

A spin-off, split-off or equity carve-out are three varied methods of divestiture with the same objectives-Enhancing shareholder value, tax benefits, and improved profitability. While the goal of all these three methods is the same, the selection amongst them is based on the broader corporate strategies of the parent company. Exit strategies are usually peppered with various challenges.

Carving out a company that is different from the core operations of the company requires thorough due diligence. A well-etched analysis of the strategy can build confidence in the process, get perfectly aligned operations, and drive the entire transaction to realize its highest potential.

Separation complexities are onerous and involve negotiations at each step. A pre-conceived transition plan which clearly spells out the entire process and the work involved at each stage would go a long way in keeping things streamlined.

Next is focusing on the compliance perspective. The spun-off company should adhere to the prevalent financial reporting norms and be compliant with other internal and external controls as well as regulations like Sarbanes Oxley (SOX), SEC filings, etc.

The company’s acumen to identify these challenges and underlying risk factors at the right time in the planning phase, while considering the key value drivers behind the divestiture, will lead to increased value generation from the chosen exit strategy.