When a company’s almost all of the outstanding shares are owned by another company (parent) then it can be said that it is a wholly-owned subsidiary of that company and it is controlled by the parent company like for example Walt Disney Entertainment holds 100 percent of Marvel Entertainment which produces movies.

Wholly Owned Subsidiary is a separate independent legal entity which is 100% owned and control by other company (parent company) and directly works under the guidance and decision making of the parent company. It has its own senior management to control the business operations of the company however all the strategic decisions at the group level are been taken by the parent company only. 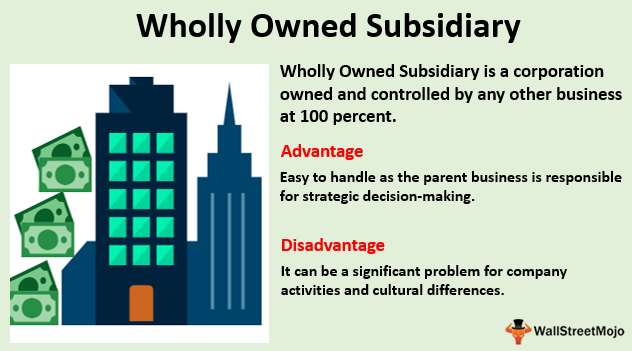 ABC holds 100% in DEF and DEF holds 100% in XYZ. In this case, DEF and XYZ both are the wholly-owned subsidiary companies of ABC and the financial statements of both the companies needs to be merged into the parent company ABC at the group level.

ABC holds 99% in DEF and DEF holds 100% in XYZ. In this Case since DEF holds full share capital of XYZ, XYZ is a wholly-owned subsidiary of DEF and DEF is a parent company for XYX. But DEF is not the wholly-owned subsidiary of ABC since full capital is not owned. Here DEF will prepare consolidated financials with XYZ and ABC will prepare the financials of its own but there will not be any need to reflect the results of the subsidiary companies in its annual report since there is no full control by ABC and still, 1% shares are pending to be acquired.

Wholly Owned Subsidiary is a 100% controlled company. All the 100% controlled companies need to report their balance sheets, income statements, and cash flow statements to the group in order to merge the same with the parent financials on each reporting date as per the accounting framework. There are certain exemptions for the wholly-owned subsidiary company both in legal and tax laws to encourage new investment by the parent company and creating more companies in order to increase employment.

This has been a guide to what is a Wholly Owned Subsidiary and its definition. Here we discuss examples of wholly-owned subsidiary along with advantages and disadvantages. You can learn more about Corporate Finance from following articles –