Thus, in order to calculate the Book-to-Bill ratio, the value of new orders received is divided by the value of billing done for completed orders during the same period.

Let us have a look at a few examples to gain a better understanding of the ratio. 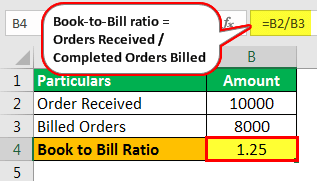 It shows that the company has an increased demand for its products against its earlier orders, which is a good thing for the company.

There is a company which manufactures electronic units. During a month, it received 100 new orders while it billed 120 orders (including some orders from the previous month). 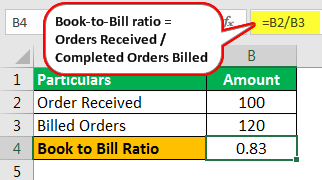 It shows that the company has a decreased demand for its products, which is a negative factor for the company as its capacity is more than the demand. Also, for every $ billed by the company, only orders amounting to $ 0.83 were booked during the month.

The following are the factors that influence the book-to-bill ratio:

The book-to-bill ratio is a critical ratio for investors. It is because by analyzing the ratio, they can evaluate whether the company has good prospects or not, as a company with a higher ratio is expected to have more significant sales during the coming periods.

Also, it will give the investors an idea that the company is efficient in completing its orders, thus effectively utilizing its capacity.

This article has been a guide to Book to Bill Ratio (BB) and its definition. Here we discuss how does book to bill ratio works along with the examples and factors influencing the ratio. You can learn more from the following articles –