What is the European Central Bank?

European Central Bank is the central bank of the European countries, which has the single aim of maintaining the price stability of the Euro, which is adopted by all the member states. It aims at controlling the inflation by monitoring the monetary policy and controlling the money supply in the market by way of interest rates. It is managed and monitors by the team of the European central bank. The members of the team are amongst representatives of the member states as decided and agreed mutually. The bank functions according to the pre-defined rules and regulations, and all the decisions are taken on the majority basis after surveying the market situations and market conditions.

The European Central Bank was started on 1st January 1999, when some of the European Union members adopted the Euro currency. The head office is situated in Germany and consists of 27 members currently. The main aim behind establishing the Bank is to increase the purchasing power by various monetary policies. It also guides the members about the implementation of various policies and on other financial matters. It is a bank for Europe’s single currency i.e., Euro, which aims to maintain the price stability of the Euro in the international market. The bank is accountable to the public through the parliament and publishes the annual report as the report of its accounts, functions, and actions.

How does the European Central Bank (ECB) Works?

The working is as under –

Structure of the European Central Bank 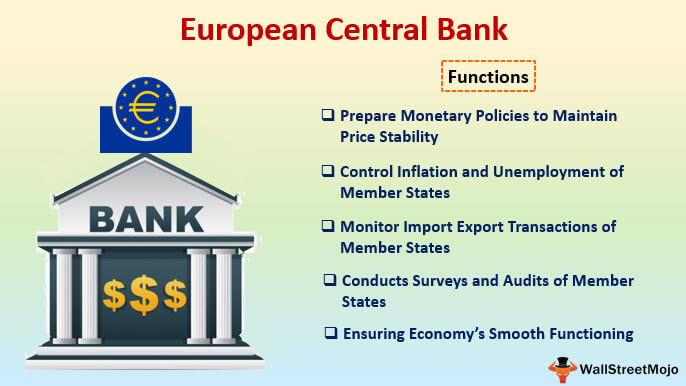 European Central bank is the controlling bank of all the member states. Currently, 27 European countries are a member of the ECB. The main aim behind establishing the bank is to maintain the price stability of the currency adopted by all the members i.e., Euro in the international market. The bank is also responsible for issuing guidelines, monitoring the banking system, controlling inflation and unemployment, and maintaining price stability. The structure consists of president and vice-president as the chairpersons and Governors of all the member states and other six executives as the Governing Committee. Under the Governing committee, there are various committees through which compliance is ensured. Through the audit reports and compliance reports, the loopholes and suggestions are communicated to the member states. The committee of the European central bank meets twice in a month to ensure smooth conduct and to formulate and discuss the plans for achieving the various objectives, which ensures the growth of the member countries.

This has been a guide to what is European Central Bank?. Here we discuss the structure, history of European central bank, and how does it work along with objectives and functions. You may learn more about financing from the following articles –