Reserve Requirement is the liquid cash amount in a proportion of its total deposit that is required to be kept either in the bank or deposited in the central bank, in such a way that the bank cannot access it for any business or economic activity.

It is mandated by central banks around the world for their member banks in order to regulate safety cash held by the banks. This cash reserve serves many different purposes in different economies. The Central bank of the United States is the Federal Bank, which holds authority on this requirement in the United States. Similarly, the People’s Bank of China does a similar function for Chinese banks. 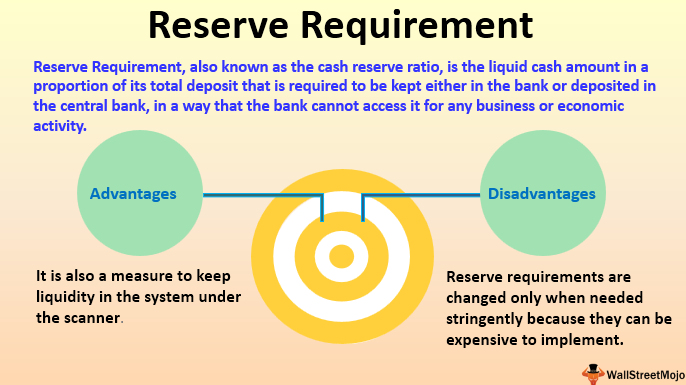 Reserve Requirement is a function of Net Demand and Time Liabilities (NDTL). NDTL is based on current deposits, saving deposits, term deposits, and other liabilities. This is also adjusted for the deposits from other banks. The formula for NDTL becomes:

The calculation can be done by using Net demand and time liabilities.

Below are the given examples to understand its calculation in a better manner.

Suppose that a bank named ABL in the United States is required by the Federal Reserve to maintain a 9.2% cash reserve. The Bank declares its net demand and time liabilities at $100 million. What is the amount of reserve that the bank will put in the Federal reserve?

Since the federal reserve has a 9.2% regulation on cash reserve, it will be applicable to the net demand and time liabilities of the bank ABL. The bank will maintain a 9.2% of its NDTL $100 million in reserve. 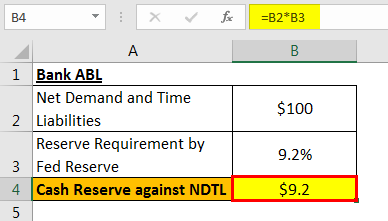 Thus, it will maintain $9.2 million in the Federal Reserve vaults.

A bank in Mexico, Smith and Sons Limited, has been mandated a reserve requirement of 7.5% of its net demand and time liabilities (NDTL). If it has the following liabilities (see table) on its balance sheet and an 80% can be attributed to the NDTL, do the calculation to get the amount it should be maintaining for reserve requirement?

All figures are in US dollars.

The table above can be used to deduce total liabilities that the bank has on its balance sheet. The reserve requirement is a function of the net demand and time liabilities (NDTL), and thus, the latter can be obtained as a means of percentage of the total liabilities. 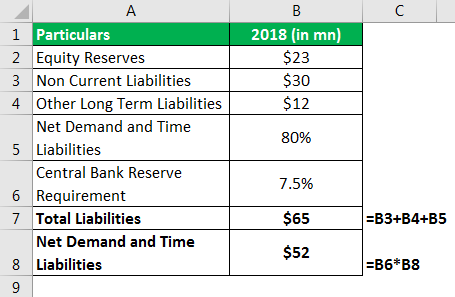 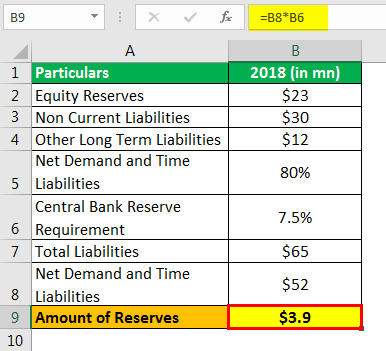 So, the number of reserves the bank has to make with the central bank of Mexico = $3.9 mn.

Reserve requirements may not always serve its purpose. As could be seen during the financial crisis of 2008-09, the lower interest rates and lesser the requirements could not manifest into expansionary tactics as intended. It was because of general distrust that could not be compensated through these requirements.

In the past 2 decades, the Reserve Bank of India has averaged 5.41% on account of the Cash reserve requirement. There are countries where there is no requirement to keep cash reserves. For example, Hong Kong, United Kingdom, and Australia are free from such requirements.

This article has been a guide to Reserve Requirement and its definition. Here we discuss components of the reserve requirement and examples with calculation. You can learn more about accounting from the following articles –