Monetary policy refers to the central banks’ actions that affect the quantity of money and credit in an economy in order to influence economic activity. When the rate of growth of the money supply is increased, banks have more funds to lend, which puts downward pressure on interest rates. Lower interest rates increase investment in plant and equipment because of the cost of financing these investments declines. Lower interest rates and greater availability of credit will also increase consumers’ spending on consumer durables (automobiles, large appliances) that are typically purchased on credit. Thus the effect of the expansionary monetary policy is to increase aggregate demand (C=consumption and I=investment increase). 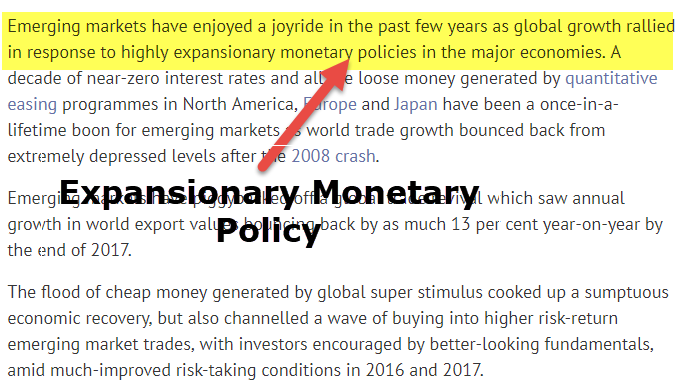 It is a policy where the central bank utilizes its tools to help in stimulating the economy. This policy acts as the booster for economic growth which is measured by GDP i.e. Gross Domestic Product. This policy is mostly used by the central banks, during recessions, when the interest falls and money supply increases which results in the increase in consumption and investments.

If the economy is at potential GDP due to the implementation of monetary expansion, the increase in real output will be only for the short run.

The followings are the disadvantages of expansionary monetary policy:

A very recent example of the expansionary monetary policy was during the Great Recession in the United States. When the housing prices reduced and the economy slowed down significantly, the Federal Reserve started cutting its discount rate from 5.25 in June 2007 to 0% by the end of 2008. The economy still being weak, it started purchasing government securities from January 2009 for a total value of $3.7 trillion.

When the policy rate is below the neutral rate, the monetary policy is expansionary. The expansionary monetary policy is successful because people and corporations try to get better returns by spending their money on equipment, new homes, assets, cars, and investing in businesses along with other expenditures that help in moving the money throughout the system thus increasing economic activity.