What is Quantitative Easing?

Quantitative Easing or QE refers to the type of monetary policy in which a central bank purchases a pre-evaluated amount of government bonds and such other financial assets for the purpose of directly injecting liquidity into the economy and hence it is also termed as large scale asset purchases.

This quantitative easing involves the Central bank buying securities (Government bonds) from its member banks for adding liquidity to Capital/Secondary markets. Simultaneously, the Central bank issues a credit to the Reserves of the bank to buy the securities. It offers the same effect as that of increasing the money supply. The purpose of such a monetary policy measure is:

One should note that this method will not be useful if the short-term interest rates are zero or approaching those levels. In such a case, the assets with long-term maturity shall be purchased since it reduces the long-term interest rates on the yield curve. Quantitative Easing can guard in inflation falling below a specified level. The process can expose to certain risks such as are:

This policy was first used by the Bank of Japan (BOJ) for combatting deflation in 2000-01. An interest rate of close to zero was maintained since 1999 and it was in March 2001 that the BOJ flooded commercial banks with excess liquidity for enhancing lending facilities, thereby splurging stock of excess reserves. The objective was to reduce any shortage of liquidity.

BOJ achieved this by purchasing more Government bonds than required and bringing the interest rates to the level of Zero. It extended the terms of Commercial Paper purchasing operation and purchased Equities and ABS (asset-backed securities) 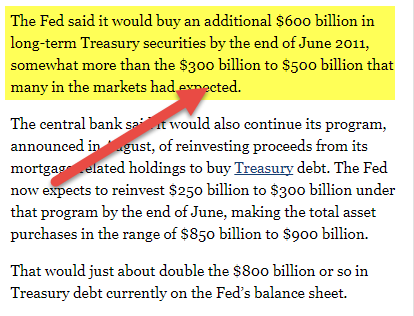 During the peak of the financial crisis in 2008, the US Federal Reserve was required to take urgent steps that involved dramatically expanding the Balance Sheet by the addition of new assets and liabilities. The Quantitative Easing was split up in multiple phases with QE1 involving:

In 2013, when it seemed the economy was bottoming out, there were intentions of ‘tapering’ some of the Fed’s Quantitative Easing policies depending on the economic data. There were no reductions in the number of bond purchases but the buying Quantitative Easing (QE) program was expected to be stopped by mid-2014.

Fed did not announce any interest rates hike but suggested if an inflation target of 2% and an unemployment rate of 6.5% be achieved, an increase in interest rate shall be considered. In the second half of 2013, the Fed continued with its Quantitative Easing program and decided to reduce it at a future date. It was in the last quarter of 2014, these purchases were stopped after an accumulation of $4.5 trillion in assets.

The Quantitative Easing (QE) program likely contributed to the following:

In 2009, when the crisis was surfacing, the European Central Bank (ECB) would be focussing on buying covered bonds signaling its initial purchases would be around €60 billion.

Subsequently, in 2013 the Swiss National Bank held one of the largest Balance Sheets equivalent to the size of the economy of Switzerland. The ECB’s assets were around 30% of the GDP. One of the massive changes in policies of 2015 was termed as ‘Expanded asset purchase program’ which involved a purchase of €60 billion from central governments, agencies and European institutions would be bought on a monthly basis.

This has been a guide on what is Quantitative Easing (QE). Here we discuss its definition along with examples from Japan, US, UK, ECB and the process of Quantitative Easing.  You may have a look at these below articles for further learnings –