Editing is common when we need to change things in any of the cells, so it is vital to get practice the shortcut key for this particular task. Often times we may need to edit the content of the cell, oftentimes we may need to edit the formula or debug the formula, so the shortcut is very important. As a new learner, it is important to practice shortcut keys to cut the short time taken for specific tasks, so let’s start one of the keyboard shortcut keys to edit a cell in excel. In this article, we will show you efficient ways of editing the cells using shortcut keys.

In Excel, editing is possible at the cell level at a time we can edit only one cell, so most of the time, we write formulas, edit them and make corrections to the formulas to debug any issues.

For example, look at the below data in excel. 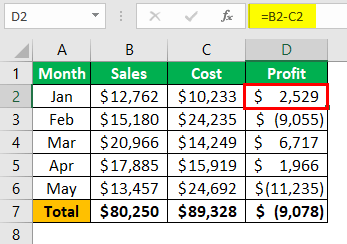 In column “D” we have formulas, so if we want to edit the formula, we can do it in two ways one is manual, and another one is keyboard shortcut key; the fact is both are simple and take an equal amount of time, ok let’s look at them one by one in detail.

If we want to edit the cell D2 formula, then first we need to select the cell for editing. 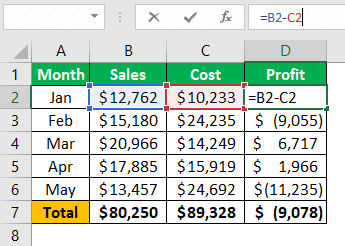 The moment we put our cursor (we can see the small blinking straight line) in the formula bar, it has gone to editing mode, and in the cell, we can see only the formula, not the result of the formula.

So, this is the way of editing the cells, and we can edit cells and formulas by directly placing the cursor on the formula bar in excel.

There is also another way of editing the cells, i.e., by double-clicking on the cell. Yeah, first we need to select the cell that we wish to edit and then double click on the cell, and it will go to edit mode. 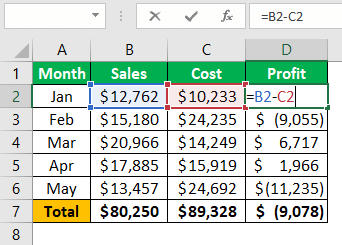 Since we double-clicked on the cell has gone to edit mode.

One more thing we can notice here is editing a blinking straight line is appeared in the cell itself rather than in the formula cell-like in the previous example.

There is the way we can identify the formula bar editing and in-cell editing, i.e., wherever colored cell reference is highlighted, it will be that mode of editing. 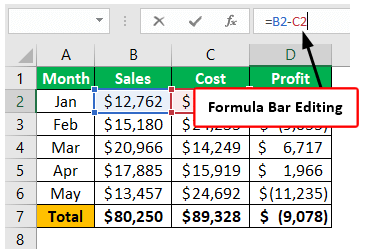 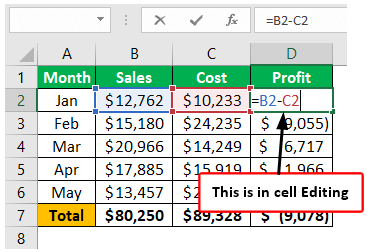 We can also use the keyboard shortcut keys to edit the excel cells, and the shortcut is “F2,” so by pressing the F2 key, it will take us the active cell to editing mode.

For example, I want to edit the cell D2, and by selecting the cell, we need to simply press the F2 key. 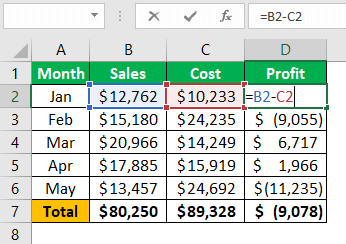 As you can see above, this works like in-cell editing, where a blinking straight line appeared inside the cell rather than in the formula bar.

However, by changing default settings, we can make this change happen; follow the below steps to make the edit happens in the formula bar.

Step 1: Go to the File tab and under this go-to options. 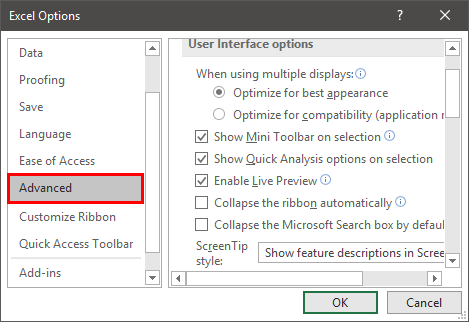 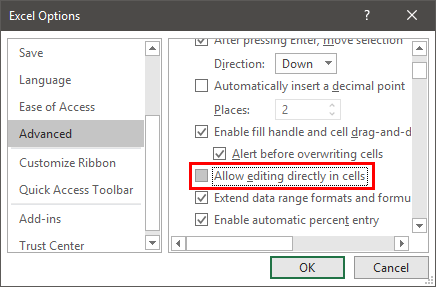 Now, if you press the F2 keyboard to the excel shortcut key, the blinking straight line goes to the formula bar instead of in-cell itself. 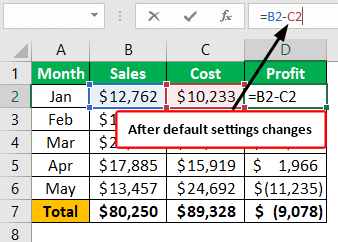 Tips for Editing Cells in Excel

An F2 shortcut key will put the cell into editing mode, but we are the ones who need to make the changes, so for an example, look at the below content.

In this example, we have a spelling mistake “savvve” so press the F2 key to edit the cell.

Upon pressing the F2 key, edit activates at the end of the cell value, so now we need to travel to the left side; by pressing the left arrow key, we can move once character at a time, so to move one word instead of one character hold Ctrl key and press left arrow it will jump to next word.

Like this, we can use the keyboard shortcut keys to edit the excel cell to the full extent.

This has been a guide to excel shortcuts to edit the cell. Here we discuss the different ways of editing the cells using shortcut keys along with practical examples. You may learn more about excel from the following articles –