What is an Intercreditor Agreement?

An Intercreditor Agreement is an agreement between common lenders regarding the terms and the allocation of collateral in case the borrower defaults. Such type of agreement is extremely beneficial to subordinate lenders as it protects their rights. 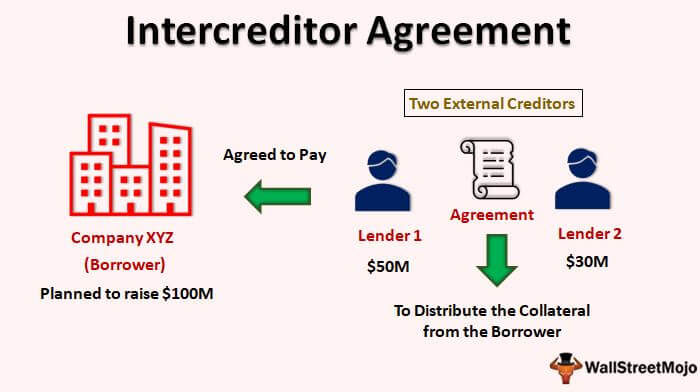 Company XYZ is planning to raise $100M, the bank has agreed to pay $20M, so $80M will have to be raised from outside. Two external creditors have agreed to pay $50M and $30M, respectively. Now if the borrower defaults, then who will have the first claim on the property of the borrower and how much can be recovered for each lender.

All this confusion is sorted by an agreement that is signed between the two lenders. The agreement is called the Intercreditor Agreement. This will help both the creditors to distribute the collateral from the borrower in case of default. So the agreement prevents lenders from engaging in uncalled disagreements over collateral distribution.

This agreement is used to deal with discrepancies and confusion that may arise in case of default in payment by the borrower. If multiple parties are involved in giving a loan to a borrower, then the collateral is challenging to distribute as the assets are not of the same liquidity and value. So it is essential to draft an agreement regarding the proper allocation of assets and rights. This agreement helps to deal with the appropriate distribution of collateral in case of default. It prevents unnecessary harassment of collateral distribution.

Intercreditor Agreement is the distribution of collateral once a borrower defaults in case the lenders are both superior. In the case of the subordination agreement, the loans are ranked in order of priority. It means a rank is given regarding which debt is to be paid first compared to other debts. So this ranking clear doubts in the minds of the lenders as they know who all will be paid as per ranking.

This has been a guide to what is an Intercreditor Agreement. Here we discuss examples, issues, and needs of inter-creditor agreement along with benefits and disadvantages. You may learn more about financing from the following articles –