What is Prepayment Penalty in Mortgage?

In many of the mortgage contracts made between the parties, many times there is a prepayment clause which states that if payment is made in advance by the borrower before the due date of payment, then it shall be treated that the terms and condition of the contract are not adhered by the borrower and hence would be liable to pay the penalty known as the prepayment penalty.

When one party of the contract pays to the other party sum of the amount of any debt before its due date, then it is known as prepayment. Now, if the borrower makes the prepayment of the loan then it would be liable to pay the penalty for the same as mentioned in the contract made by the parties at the beginning of the deal.

This penalty on the prepayment of the loan acts as a tool for discouraging the prepayment as such prepayment leads to loss of the business of the lender of the funds. By charging such penalties, the lender would be able to get compensation for his loss of business. 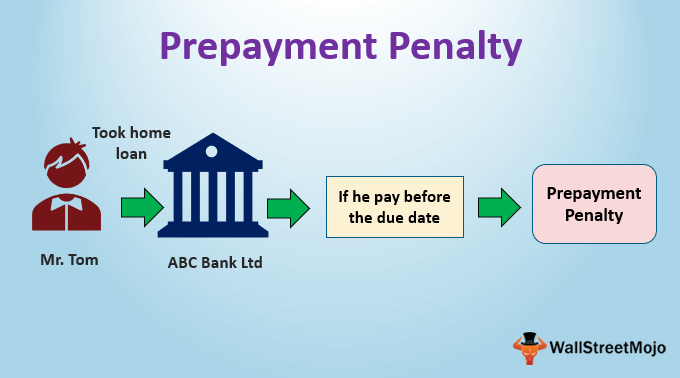 There exists the prepayment risk in the mortgage contracts wherein case the borrower makes the payment of an amount in advance from its due date then the lender might lose his business. So, it is specified generally in the mortgage contract mentioning the details about the calculation of the prepayment penalty in case of the prepayment. The terms and conditions of the clause are to be mentioned by the lender well in advance at the time of completing the deal of such a loan.

There are mainly two types that are associated with the prepayment of the amount due. It includes the following:

Example of Prepayment Penalty in Mortgage

Mr. Tom took the home loan 10 years back from the bank named ABC Bank Limited for a period of 20 years. The current outstanding balance of the loan is $ 1,000,000. At the time of making the contract, it was decided that in case the borrower makes the prepayment of the loan, then he would be liable to pay 3% of the balance amount as the prepayment penalty. Now if the borrower wants to repay the loan then what will be his penalty?

In this case, it is levied on the basis of the percentage of the balance of loan which us 3% as mentioned in the contract.

How is it Calculated?

There are different ways using which the penalty can be calculated by the lender by mentioning in the terms of the contract. It includes the following:

Why Do They Exist?

So, in order to protect the interest of the lender and providing the compensation against such loss, prepayment penalty clause is entered in the contract between the lender and borrower where it will be levied on the borrower in case it makes the payment in advance from the date when it actually becomes due. This usually varies from lender to lender as per the terms and conditions of the contract.

How Much Does Penalty Prepayment Cost?

How to Avoid Prepayment Penalties in Mortgage?

In case, if payment is made in advance by the borrower before the due date of repayment, then it would be liable to pay the prepayment penalty. The amount of the penalty that will be applicable will be calculated as per the terms and conditions of the contract made between the parties. By charging the penalties, the lender will be able to get compensation for his business.