The economic principle of comparative advantage holds in case of free trade where the countries specialize in producing goods and services which it can produce more efficiently with lower opportunity cost than the other goods and services. It results from different endowments of the various factors of production i.e. labor, capital, land, entrepreneurial skill, technologies, etc. Therefore, a country should export those goods and services where it has a relative advantage with respect to the other country and the relative productivity is higher, and import those where the opportunity cost is higher. This ensures utilizing the benefits of the existing free international trade. 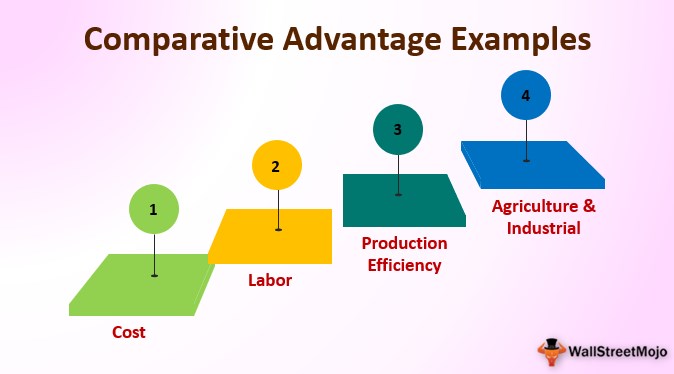 The following are examples of comparative advantage in the real world

In order to decide which country has a comparative advantage over which commodity than the other country, the opportunity cost needs to be determined first.

On comparing the opportunity cost for both the countries for one product at a time, the below conclusions can be derived :

Consider the production efficiency for the two countries – India and the UK – who. have, let us assume, 100 units of each of the factors of production. These 100 units need to be employed in the production of either rice or tea.

Specialization – If both the countries- India and UK, employ all their resources in the production of both commodities – rice and tea respectively, in which each of the countries has a comparative advantage over the other- the total output of tea would increase from 15 to 20 tonnes and output for rice would increase to 20 tonnes. Therefore, if the countries can merge their specialization, both of them can gain from the trade and enhance the total output levels.

If a country is an agriculture-based compared to another which is industrial goods- based, for example, Peru and China. Peru is an agrarian country and lets us say it produces ropes. It should be exporting this product to its trade partner China by importing goods and services like electrical equipment – which Peru does not have the option to produce from scratch. Based on this theory of comparative advantage, Peru and China both remain at an economic gain in the free trade marketplace.

Even in case of Absolute advantage that an economy might have, in case of international trade – where free trades exist – comparative advantage becomes very important in finding the right balance between the import and export between the two countries in this global marketplace. The reasons could vary from the diversity of skills, lack of environmental support, costs, but the basis of this economic term remains the ability of an economy to produce any goods or services at a lower opportunity costs when compared to its trade partners. It helps to realize stronger margins in the long run for each of the trading economies.

This has been a guide to Comparative Advantage Examples. Here we discuss its definition and the top 4 examples of comparative advantage in the real world. You can learn more about accounting from the following articles –