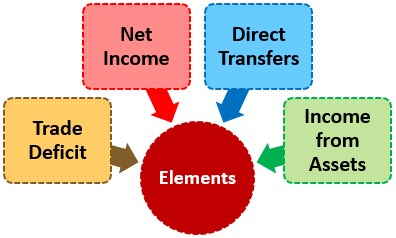 Goods and services which country trade with other countries is the largest component in every economy, therefore if the country has a high level of imports compare to its Exports value resulting in the trade deficit.

There are two sources of income received by people in a country. I.e.

Country residents who work outside send part of their income to the home country, as well as foreign aid spent or received by the county and Foreign Direct Investment in the country’s business and industries, reflects in the Current account deficit.

Increase or decrease in government and central bank reserves, real estates, bank deposits. Assets owned by foreign individuals and business are subtracted from this income includes

Below is the example to calculate Current Account Deficit 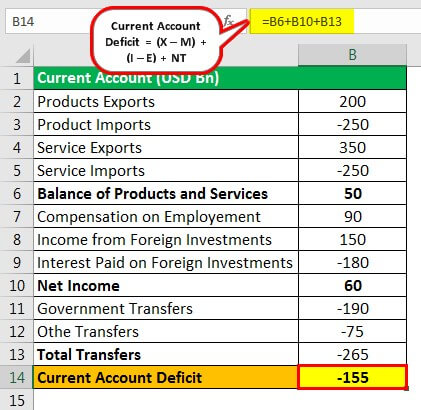 Therefore, the Current Account Deficit at the US $ 155 Bn.

Current Account deficit although it implies a country’s income less than its spending, is not necessary a disadvantageous for the country since many developing countries need continuous investment and resources in infrastructure, business, and industries for growth, which eventually generates income and employment opportunity to residents over a period. In case a continuous rise in negative current account balance compare to the country’s economy, the government needs to take immediate measures before the situation goes out of control affecting social, the financial status of the country and standard of living of residents of the country.

This has been a guide to Current Account Deficit and it’s Meaning. Here we discuss an example of current account deficit, the balance of payments of the country along with its formula, effects, and elements. You can learn more about from the following articles –