What is Comparative Advantage Formula?

Comparative advantage formula is an economic factor that calculates comparative advantage between two countries producing the same goods in their own countries. On an absolute basis, a country can produce more quantity of a particular good in comparison to the quantity produced for the same good in another. But that does not imply that the country which produces more goods on an absolute basis has got an advantage over other countries. In order to find an advantage on a comparative basis, it is important to understand the opportunity cost for producing other wells.

Let’s see some simple to advanced examples of Comparative Advantage Equation to understand it better.

Below is given data for the Calculation of Comparative Advantage formula. 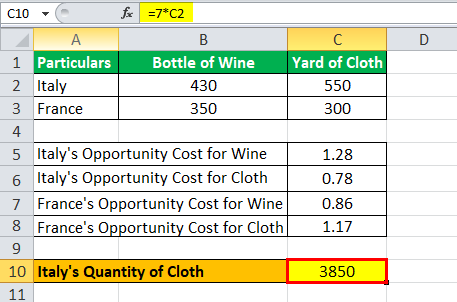 Calculation of Italy’s Quantity of Wine 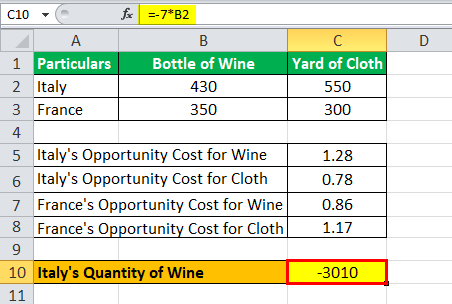 The quantity of wine produced will be -7*430

Calculation of Italy’s Quantity of Cloth

The quantity of yard of cloth manufactured will be 7*550

Calculation of France’s Quantity of Wine 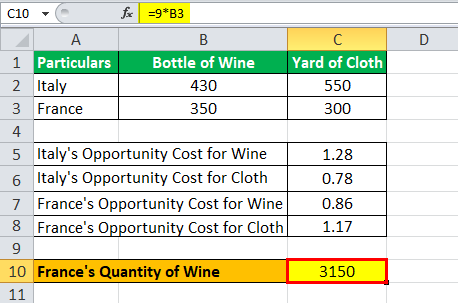 The quantity of wine produced will be 9*350

Calculation of France’s Quantity of Cloth 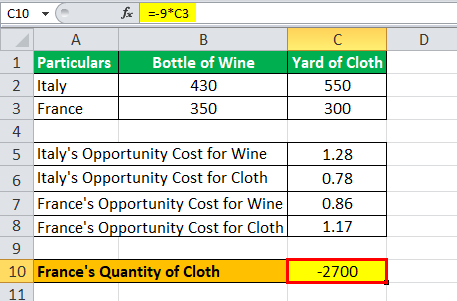 The quantity of yard of cloth manufactured will be -9*300

A country like India has a huge comparative advantage compared to the western country in terms of the outsourcing industries. Since India has a huge population of young educated English speaking population, this acts as an advantage to provide scale and price competitiveness which results in a lot of work being outsourced in India.

Relevance and Use of Comparative Advantage Formula

This has been a guide to Comparative Advantage Formula. Here we discuss how to calculate comparative advantage using its formula along with examples and downloadable excel template. You can learn more about financing from the following articles –