Infant Industry Argument is an economic concept that favors protection of the new industries from competition on an international level till the time they gain maturity and become strong enough to face competition. This argument sets clarification for those countries that impose levy on the imports on the ground that they want to protect the new industries and help them sustain.

Example of the Infant Industry Argument 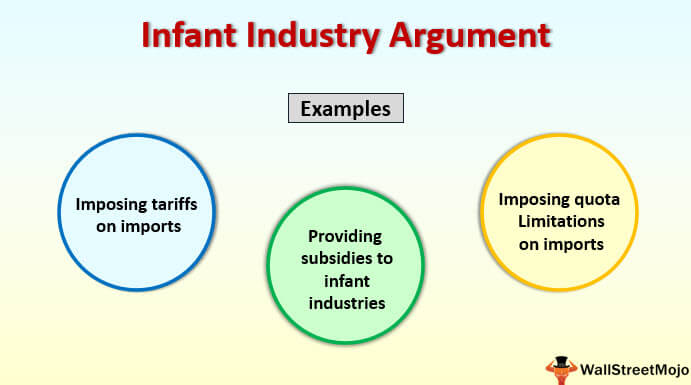 An example of how this argument can be implemented includes:

It is said that generally protecting the new industries following the concept of infant industry argument results in a negative impact on economic growth. On the other hand, removing such practices which act as a barrier to free trade helps the economy to grow. The countries that follow the argument have to face a negative effect on their growth rate of the economy.

What Protects an Infant Industry?

There are several measures that can be taken in order to protect the new industries.

The practice of following the infant industry argument is being criticized on the ground that the new industries to whom protection is provided become inefficient due to the fact that they do not face competition from the foreign markets. Also, once imposed, such protections are difficult to take back, which is not a good thing.

The infant industry argument is being followed by the developing countries to nurture and protect the domestic industries that are in their initial stages. The economies should always try to find other alternatives also to protect the industries since this practice negatively impacts economic growth.

This has been a guide to Infant Industry Argument & its Definition. Here we discuss what protects an infant industry with an example along with criticism, advantages, and disadvantages. You can learn more about from the following articles –