The term Grexit is a combination of Greece or greek with the word exit which means an exit of Greece from the eurozone or European union. The Grexit was cropped up due to Greece’s possible withdrawn from the eurozone. The term introduced by two famous economists of Citigroup Ebrahim Rahbari and Willem H. Buiter on February 6th, 2012 and which subsequently made headlines in media and major newspapers.

The Grexit is very critical for investors and others including economists who tried to study the impact of the financial crisis on the greek itself and the world economy. The term Grexit become popular as greek citizens proposed to leave the European Union and introduce local currency drachma as the official currency of Greece to ward off the country’s debt crisis. 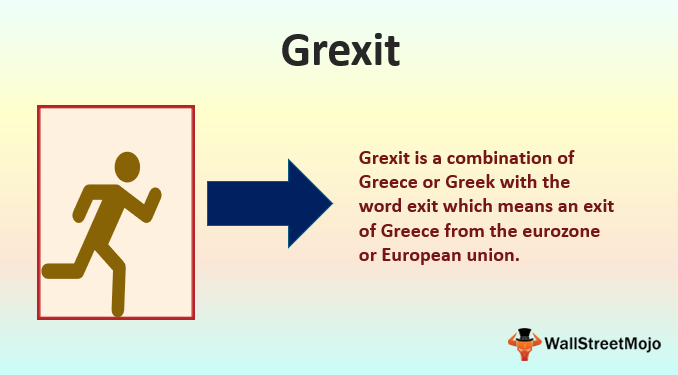 Greece joined the eurozone in the year 2001 but the 2009 financial crisis left Greece as the epicenter of Europe’s debt problems. Greece started facing bankruptcy from 2010 which spread the fear of the second financial crisis one after the other among the peer members. By then many members had already assumed exit of Greece from the eurozone and the term Grexit cropped up.

The aftermath of the 2009 financial crisis makes clear the extent to which Greece was exposed to financial terrible ordeal it was going through. In 2010 when Greece was heading towards bankruptcy Greece’s debt to GDP ratio was exorbitantly high 146%. There were many factors that were the apple of discord for the Greece debt crisis.

Factors Behind the Grexit

Following are the main factors which lead to the Greece debt crisis:

The following are consequences of Grexit.

In conclusion, we could say that Grexit had been envisaged as bad for Greece in the short as well as in the long run.

This has been a guide to what is Grexit and its meaning. Here we discuss the impact and factors behind the Grexit along with consequences and Greece’s timeline. You can learn more from the following articles on Economics –