Overview of Banks in Canada

Even if Canada has multiple banks, due to the decline of the Government’s support and aid, the banking system undergoes a critical scenario. As per Moody’s Investors Service, the approach of Canadian banks remain negative in 2017 as well.

If we investigate the stance of Government in regards to the banking system in Canada, we would see that there is a huge mortgage debt (which has doubled in the last 10 years) that created a reasonable rise in unemployment and in the interest rate.

Even if there’s tepid economic growth in Canada, the banks are performing quite well. These highly-rated banks are also compared with the best banks in the world.

Structure of Banks in Canada

As per the last data (as of August 2017), it was found that there are 29 domestic banks. There are also 24 foreign banks that are subsidiaries. Other than that, 27 foreign bank branches and 3 foreign bank lending branches offer a full gamut of respective banking services.

As per the last report on 31st July 2017, here is a list of top 10 banks in Canada ranked by the total assets controlled – 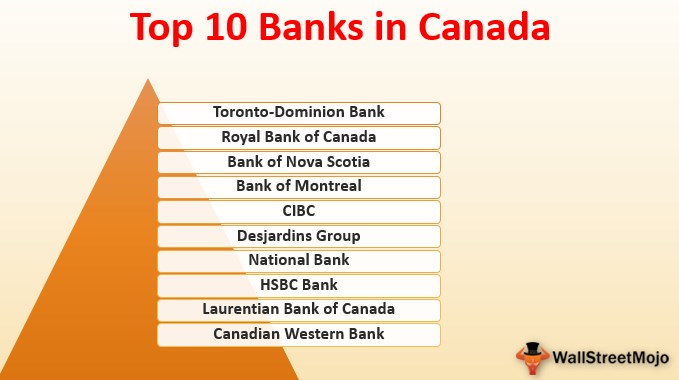 As per the report of 31st July 2017, this is the largest (top-most) bank in Canada with controlling assets. Toronto-Dominion Bank controls around C$1.202 trillion of assets. The net income of this bank as in the year 2014 was C$7.7 billion and the revenue in the same year was C$29.9 billion. It was founded in the year 1955 and its head-quarter is in Toronto-Dominion Centre, Toronto, Ontario. This is one of the largest banks and it was ranked 66th in 2015 on Forbes Global 2000.

Royal Bank of Canada is the second largest in terms of controlling total banking assets. It handles total assets of around C$1.201 trillion. In the year 2016, it has earned a net income of US$8.35 billion and a revenue of US$35.28 billion. This bank has employed 78,000 people. It is one of the oldest banks and was established in the year 1864. The head-quarter is situated in Toronto, Ontario.

This is the third-largest bank in terms of controlling total assets. It handles around C$906.332 billion. It has employed around 89,214 employees as per the data of 2015. In the year 2016, it has generated a net income of C$7.413 billion. The revenue in the same year was C$26.049 billion. This bank is pretty old. It was established in the year 1832 in Halifax, Nova Scotia. The head-quarter is situated in Toronto, Ontario.

The fourth-largest bank of Canada, in terms of total assets acquired, is Bank of Montreal. It handles around C$708.617 billion of total assets and generated revenue of US$19.188 billion in the year 2016. In the same year, the net income of the Bank of Montreal was US$3.455 billion. It has employed around 45,234 employees. It is one of the oldest banks in Canada. It was established in 1817, more than 200 years ago. Its head-quarter is situated in Montreal, Quebec.

Canadian Imperial Bank of Commerce is the fifth in terms of total assets acquired. As per the last report, this bank has acquired total assets of C$560.912 billion. In the year 2016, it has generated revenue of C$15 billion. In the same year, after paying off all the expenses it produced a net profit of C$4.3 billion. 43,213 employees work in here. It was established on 1st June 1961. The head-quarter of CIBC is in Commerce Court, Toronto, Ontario.

Desjardins group isn’t a bank, but the largest associations of credit unions in North America. It was established in the year 1900 in Levis, Quebec and the head-quarter of this group is situated in the same place. This financial institution provides a gamut of services like checking accounts, stockbroking, insurance, asset finance, investment banking, consumer finance, etc. Around 47,655 people work here. Desjardin group is also a member of Interact and issues MasterCard and Visa credit cards. Total assets acquired by this group are C$271.983.

In terms of total assets acquired, it has taken the seventh spot in Canada. The total assets acquired by the National Bank of Canada are C$240.072 billion. In the year 2016, it has generated revenue of C$5840 million and a net profit of C$1256 million. As per the last report on 31st October 2016, it has been found that 21,770 people work in the National Bank of Canada. It was established in the year 1859. The head-quarter is situated in Montreal, Quebec.

This bank has secured the ninth position in terms of total assets acquired. The total assets acquired by the Laurentian Bank of Canada are C$45.212 billion. In the year 2016, this bank has generated revenue of $915.5 million. And in the same year, the net profit of this bank was $187 million. 3600 people work here. It was a quite old bank, established in the year 1846. The head-quarter is situated in Montreal, Quebec.

This has been a guide to Canadian Banks. Here we discuss the list of top 10 banks in Canada with their structure & financial status. If you are looking forward to making a career in Banking, then you can check out some of the awesome resources –