Overview of Banks in Guernsey

It has been said that Guernsey has become an international finance center only for one significant reason. It’s because the banks in Guernsey has taken a key role in the development of Guernsey.

In the year 1963, the first bank was established in Guernsey. From then onwards, a total of 24 licensed banks have been founded and they offer quite diverse services to their customers. From targeting the local customers for retaining banking to attracting an expatriate market for getting huge deposits from high net-worth individuals.

Structure of Banks in Guernsey

Guernsey’s banking sector is one of the evolving banking sectors in the world. The banks in Guernsey can be divided into two significant sectors –

As per the last report in the year 2016, Guernsey’s banks had the total assets of US $109 billion which comprise securities, advances, loans, investments, etc. The total liabilities of these banks were the US $154 billion.

As you already know, there are 24 licensed banks in Guernsey. We will look at the top 10 banks of Guernsey below – 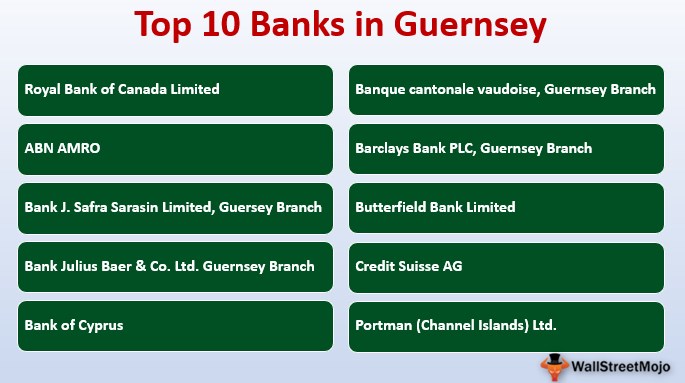 This top bank has a branch in Guernsey. It is a privately held company and it was founded in the mid-20th Even if this bank is headquartered in Sao Paulo, Brazil, it has a great customer base in Guernsey as well. Around 30,000 employees work here. Joseph Safra has been serving as the Chairman of the entire conglomerate. This bank also serves the customers in countries like the US, the Middle East, Europe, the Caribbean, Latin America, and Asia.

This top bank in Guernsey is part of Julius Baer Group. Around 5,390 people work in this group. The total assets of Julius Baer in the year 2013 were CHF 72.522 billion. The profit in the same year was CHF 188 million. Revenue in the same year was quite staggering, i.e. CHF 2.195 billion. It was founded in the year 1890, around 127 years ago. It is headquartered in Zurich, Switzerland. This serves as a great foreign bank in Guernsey.

It was founded in the year 1899, around 118 years ago. In the year 2016, it was reported that around 4334 people work here. The total assets acquired by Bank of Cyprus in 2016 were US $32.47 billion. Operating income and revenue in the same year were US $686 million and US $2.69 billion respectively. It has head-quarters in Strovolos, Nicosia, Cyprus; but it has a presence in the Channel Islands too.

This is a Swiss cantonal bank that has a branch in Guernsey. It was founded in the year 1845, almost 172 years ago. In Switzerland, this bank has 74 branches as of 2014. As per the report of the year 2014, 1946 employees work in Banque cantonale vaudoise. In the year 2014, it was reported that the total assets of Banque cantonale vaudoise were CHF 41,287.66 million. This bank is one of the 24 banks which have been serving 26 cantons in Switzerland.

It was one of the oldest banks in the world. It was founded on 16th November 1690, almost 327 years ago. It is headquartered in London, United Kingdom. However, it has a branch in Guernsey. As per the last report in the year 2016, around 129,400 employees work here. The total assets in the year 2016 were 1.213 trillion pounds. Revenue and operating income in the same year were 21.451 billion pounds and 3.230 billion pounds respectively. It provides services in retail banking, commercial banking, investment banking, and wealth management.

The official name of this bank is The Bank of N.T. Butterfield & Son Limited. This is the bank of Bermuda and was founded in the year 1858, almost 159 years ago. Its head-quarter is located in Hamilton, Bermuda. But it has a branch in Guernsey as well. It serves many areas other than Bermuda like the Bahamas, Cayman Islands, Guernsey, Switzerland, and the United Kingdom. It is listed on the Bermuda Stock Exchange (BSX).

Portman (Channel Islands) Ltd. is a subsidiary of the Portman Building Society. Prior to that this bank was a subsidiary of Scarborough Building Society. As per the last report we got in 2016, the total assets acquired by this bank were US 2,374.9 billion and the total income in the same year was reported as the US $59,836 million. It offers mainly two services – mortgage banking and savings banking. Even if it serves a major area of the UK, it also serves customers of Channel Islands and Guernsey as well.

We hope you liked this guide to top banks in Guernsey. If you are looking forward to making a career in Banking, then you can check out some of the awesome resources –