Overview of Banks in Bermuda

Situated in the heart of the North Atlantic Ocean, Bermuda is a territory of the British island. Bermuda’s economy has been primarily based on light manufacturing and tourism industries. But in the last few years, Bermuda has been attracting a lot of international exposure and as a result, it is gradually becoming a popular international business destination. The banking system of Bermuda is not as progressive as one wants to think. But things have been changing and the banks in Bermuda have been performing well as per the last report received in June 2017.

The consolidated banking assets of Bermuda as per the statistics of 2016 are the US $22,700 million. And the deposit guarantee is the US $25000.

Structure of Banks in Bermuda

The peculiar thing about Bermuda is there are only four banks in Bermuda. Even if Bermuda is called an offshore international center of business and insurance, we cannot call it an international banking center.

Due to this approach, the whole banking sector in Bermuda was reduced by $1.49 billion during the last year. 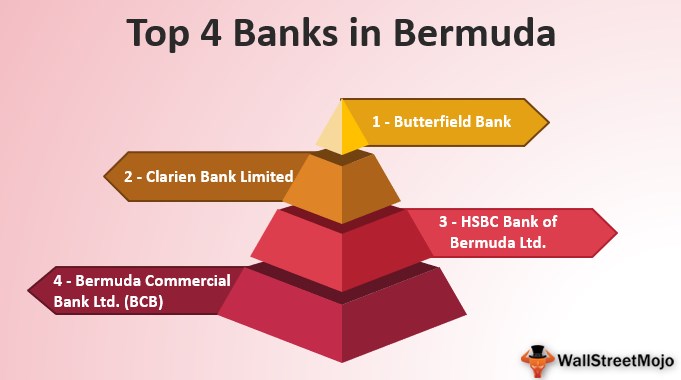 Butterfield bank is the biggest bank of Bermuda, has acquired around $11.1 billion in total assets. It has also captured around 38% of the local banking market. It is like any other local bank charges its customers a fee every month for checking accounts. Till the end of 2017, the bank has a target of reaching a 60% efficiency ratio, because it has missed its target of reaching a similar efficiency ratio from March to June 2017.

During these three months, the bank’s non-net interest expenses catapulted to $75.3 million which is around $9.5 million more than the previous year. Even if Butterfield bank has a reputation of around 160 years, 2017 is a new era for them because in 2017 they would put behind the crisis of sub-prime mortgage of the US stooped them down to its knees for a long time. As per the statistics of February 2017, Butterfield bank has generated over $115.9 million as profits.

This is great news because the profits of 2017 have been almost $38.2 million more than 2016’s profits. Another noteworthy thing that should be mentioned is Butterfield’s huge shareholders’ list which also includes some prominent names of Wall Street. This is the sweet fruits of the initial public offering of the bank on the New York Stock Exchange in September 2016.

HSBC Bank of Bermuda Ltd. is the second bank in terms of the size of the total assets in Bermuda. It has acquired assets of around $8.7 billion. This bank was established in the year 1889. Back then it was called Bank of Bermuda Ltd. It is the most profitable bank in Bermuda. It has acquired almost 47% of the total local banking market. It also charges a monthly fee for checking accounts.

When HSBC acquired this bank in 2004, it had 1050 employees; now the number of employees has reduced to 730 only. As per the statistics of February 2017, the net profits of this bank of 2016 were $117 million. If we compare the figure with the net profits of 2015, we would see that the net profits have increased almost thrice. The bank also paid a handsome dividend of $280 million to its owners.

HSBC also sold a private banking operation to Butterfield which resulted in a reduction of operating expenses by 18% from the last year’s operating expenses. HSBC has also contributed around $700,000 into the various social causes in Bermuda.

This is the third biggest bank in Bermuda. As per the last report, it has acquired total assets of around $1.1 billion. As per the last report of April 2017, Clarien Bank has made around $1.2 million of net profits in 2016 which is more than twice the net profits of 2015. Clarien Bank could hit such targets due to the tremendous downfall of operating expenses and for increasing new lending hugely.

What’s strange is even if the net profits of 2016 was an all-time high, the revenue of 2016 was 3% less than the revenue of 2015. It is because of the impaired loans that have a large chunk (around 15%) of the total portfolio. Previously it was named Capital G Bank Ltd. It has amalgamated and changed its name on 7th January and 22nd April 2017 respectively. Like all other local banks, Clarien Bank also charges a monthly fee for checking accounts.

One of the four licensed banks in Bermuda has employed around 73 employees who take care of their varied customers. BCB offers various financial products and services ranging from savings bank accounts to checking accounts, fixed deposit accounts to e-banking services, drafts as well as credit cards. The bank also offers investment products to its high net worth customers.

The bank charges a monthly fee for maintaining checking accounts. It has also acquired two companies of Bermuda in the year 2011 – Charter Corporate Services Ltd. and Paragon Trust Ltd. As per the last report, BCB has generated well over $36 million in total income in 2016 which is more than double what BCB has earned in the previous year.

We hope you liked this guide to top banks in Bermuda. If you are looking forward to making a career in Banking, then you can check out some of the awesome resources –