As of 2017 total assets in the Banking Sector stood at $ 159.50 billion. State Bank of Pakistan (SBP) is the Central Bank of Pakistan and it is responsible for regulating the monetary and credit system of the country and is instrumental in securing monetary stability and judicious utilization of the country’s productive resources. It functions through it’s three fully owned subsidiaries namely: 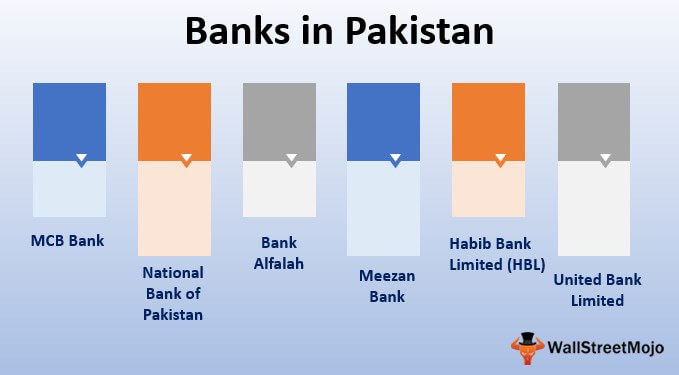 Structure of Banks in Pakistan

Banks in Pakistan are categorized as below:

Let’s see each one of them in detail:

Founded in 1941, Habib Bank Limited is the largest bank by asset in Pakistan. It operates through its wide network of 1751 branches and 2007 ATMs and provides services in the areas of Branch Banking, Corporate Banking, Retail Financing, SME and Investment Banking services. It is headquartered in the capital of Pakistan i.e. Karachi. The bank has branches in various countries including Europe, Australia, Middle East, America, Asia, and Africa. The shares of the bank are listed on the Karachi Stock Exchange.

Founded in 1949 and is the largest state-owned bank operating in Pakistan. It has an extensive branch network of over 1313 branches in Pakistan and a global presence in 11 countries and representative offices in China and Canada. The Bank acts as a trustee of public funds and agents to the SBP. It is headquartered in Karachi. It provides both commercial banking and public sector banking services and is a leading player in the debt-equity market, investment banking, agriculture financing, retail financing, and treasury services. The bank is majorly owned by the State Bank of Pakistan which is holding 75.20 percent voting rights as per the shareholding pattern as at Dec 2017 and

Meezan Bank is Pakistan’s first and largest Islamic Bank which commenced its operations in 2002 after being issued the first-ever Islamic Commercial Banking license by the State Bank of Pakistan. It operates under the principle of Islamic Shariah and is recognized for its product development capability, Islamic Banking research, and advisory services. It provides a wide range of Islamic banking products and services through its wide network of the retail branch network of more than 600 branches across Pakistan. The Bank has been conferred with major recognition from various local and international institutions as the Best Islamic Banks in Pakistan. As of Dec 2017, the Bank has a healthy Capital Adequacy ratio of 12.89 percent. It is headquartered in Meezan House, Karachi, Pakistan.

Bank Alfalah is the fifth largest private Bank of Pakistan and commenced banking operation from 1st November 1997. It operates with more than 600 branches across Pakistan and has an international presence in Afghanistan, Bangladesh, Bahrain, and a representative office in UAE. The Bank is owned and operated by the Abu Dhabi Group and it provides financial solutions to retail consumers, corporations, institutions, and government through its wide array of products and services. Strengthened with the banking of the Abu Dhabi group and driven by the strategic goals set out by its board of management, the bank has invested in revolutionary technology to offer an extensive range of products and services. The Bank is headquartered in Karachi, Pakistan.

MCB Bank Limited is one of the oldest and top banks in Pakistan. Founded in 1947 and was nationalized in 1974 as part of the Government of Pakistan’s economic reform movement and was later privatized in 1991. The Bank has been conferred with the prestigious Euromoney Award for Best Investment Banks in Pakistan for two years in a row (2016 and 2017). It provides commercial banking and related products and services in Pakistan, South Asia, Middle East, and Eurasia. The Bank is headquartered in Lahore, Pakistan.  The Bank has a customer base of approximately 4 million and total assets of around Rs 300 billion and operated through a wide branch network of more than 1100 branches.

Founded in 1959, United Bank is one of the oldest and largest commercial banks in the private sector in Pakistan. It operates through a wide network of more than 1390 branches across Pakistan and has an overseas presence in more than 19 countries. The Bank is engaged in commercial banking and related services and is headquartered in Karachi, Pakistan. The Bank boasts of a strong financial profile and consistent profitability record and specializes in Retail Banking, Corporate Banking, Investment Banking, Treasury Services, etc. The Bank’s shares are listed on all three stock exchanges of Pakistan and its Global depository receipts (GDR) are listed on London Stock Exchange. The Bank employs more than 10000 people and is committed to providing the best banking experience to its clients.

This has been a guide to Top Banks in Pakistan. Here we discuss the market overview of Banks along with its structure. If you wish to make a career in Banking, then do have a look at these articles below –