Overview of Banks in Finland

After three years of recession, in 2015, the Finnish economy has started to recover. One of the most significant aspects of quick recovery from the recession is the development of the banking system in Finland.

The significant challenge Finland’s banking system has been facing is the Finnish bank’s impaired assets are quite high in percentages compared to Sweden (1.1%) and Norway (1.3%). However, Finland is expecting to improve the quality of assets since the interest rates have been quite low and there is a stable housing market.

As per Moody’s report, it is expected that the funding and the liquidity of Finnish banks would remain sound for the next 12-18 months.

Structure of Banks in Finland

The structure of Finland’s banking system is quite different.

As of now, there are 17 banks in Finland. These banks can be divided into four categories –

Bank of Finland is the central bank of Finland and controls all the other banks and is considered as the national monetary authority. From articulating monetary policy to producing statistics, from issuing bank notes to ensuring the efficiency of the banking system, Bank of Finland does it all.

As per the Corporate Finance Institute, here are the top banks in Finland – 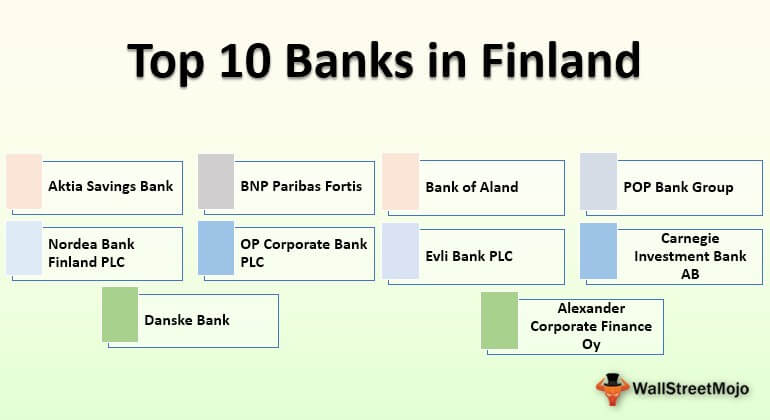 This is one of the largest savings bank in Finland. Aktia Savings Bank is owned by Finnish savings bank institutions, other savings banks, and high net-worth individuals. It was founded in the year 1991. As per the last report in 2016, it was found that the total assets acquired by this bank were the US $11,786 billion. The net profit in the same year was the US $63 million. The head-quarter of this bank is situated in Helsinki, the capital of Finland. Around 948 people work in this bank.

This is one of the foreign banks serving the customers of Finland. BNP Paribas Fortis is the product of the merger between BNP Paribas Group and Belgian Fortis Bank. It was established in the year 2009. The head-quarter of this bank is in Helsinki. As per the last report in the year 2016, the total assets acquired by this bank were the US $357 billion and in the same year, the bank generated a net profit of US $2079 million.

One of the biggest subsidiaries in terms of total assets acquired, Nordea Bank Finland PLC is the subsidiary of Nordea Bank AB. Its head-quarter is also situated in Helsinki. It has over 650 branches across Finland and it has employed over 6500 people. In the year 2016, total assets acquired by Nordea Bank Finland PLC were US $287 billion and the net income for the same year was the US $1,158 million. It serves both personal and corporate customers.

This is one of the oldest banks in Finland. It was established in the year 1902. The earlier name of this bank was Pohjola Bank PLC. It is also headquartered in Helsinki. The employees that work in this bank are huge in number, around 12,200. In the year 2016, OP Corporate Bank PLC has acquired total assets of US $160 billion and in the same year around the US, $1,370 million of net profit was generated.

This is another oldest bank in Finland. It was established in the year 1919. It has 13 branches across Finland. And it has employed around 700 people. The head-quarter of Bank of Aland is situated in Mariehamn, Aland Islands. It is one of the largest commercial banks in Finland. In 2016, the bank has acquired total assets of US $6,180 million. And the net profit generated by the bank in the same year was US $24 million.

POP Bank Group is the top bank in Finland in the retail domain. This bank group comprises of a central credit institution, Alliance Coop, and 26 cooperative POP banks. It has a varied client, serving private customers, small businesses, and mainly forestry and agricultural clients. In the year 2016, it was reported that POP Bank Group has had total assets of US $5,090 million and in the same year the bank group has generated around US $10 million of net profit.

Evli Bank PLC was established in the year 1985. The significant offerings of Evli Bank PLC are in the area of investment banking. The head-quarter of this bank is in Helsinki. And it has employed over 254 employees. It provides services in asset finance and corporate finance. In the year 2016, the total assets acquired of Evli Bank PLC were US $909 million. And the net profit of Evli Bank PLC in the same year was the US $11.7 million.

This is one of the branches of Carnegie Investment Bank AB of Sweden. The head-quarter of this bank is situated in Helsingfors. As expected this bank offers multiple services in mergers and acquisitions, professional advisory services in regards to equity capital markets (ECM), sales trading, and equity research. The main focus of this bank is high net-worth individuals and small businesses in Finland.

Alexander Corporate Finance Oy is a part of Alexander Group. The head-quarter of Alexander Corporate Finance Oy is situated in Helsinki. It was founded almost 30 years ago, in the year 1988. It is a popular investment bank that operates privately and as an independent investment wing. It is run under the authority of the Financial Supervision. The main services that these private bank offers are mergers & acquisitions (M&A), valuation, and capital market transactions.

We hope you liked this guide to top banks in Finland. If you are looking forward to making a career in Banking, then you can check out some of the awesome resources –