Overview of Banks in Ireland

The outlook of the banking system in Ireland has been positive, mentioned by Moody’s Investors Services. They have mentioned two important things while investigating the rating scenario of banks in Ireland –

The strengths of the Irish economy are their new demands for loans and demands for other banking products. Moody’s Investor Services expect that the Irish economy’s real GDP will outperform most of the countries in the Euro region. And Irish will retain their sustainable funding profiles in years to come.

There are a total of 64 banks in Ireland. And most of the banks have been performing quite well.

All banks must be licensed by CBI. And these can be divided into two categories – 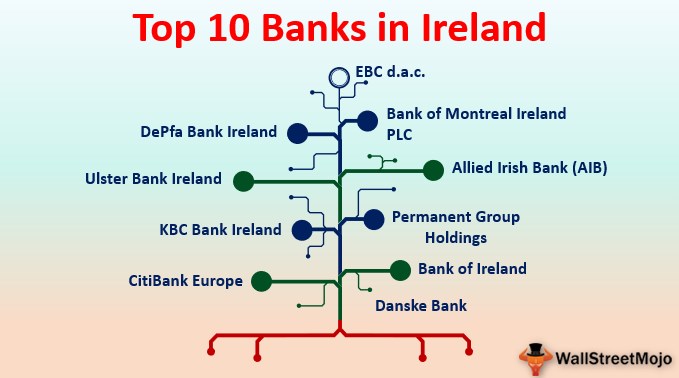 It was founded on 21st September 1966, around 51 years ago. Its head-quarter is located in Dublin. As per the last report in the year 2016, the operating income and the net income were Euro 2.9 billion and Euro 1.7 billion respectively.

It was established in the year 1783. Its head-quarter is situated in Dublin. The main focus of this bank is to sell and provide banking and insurance products. As per the report of 2014, it was found that around 11,086 people work here. The net income in the year 2014 was Euro 921 million. In the same year, the revenue and the operating incomes were Euro 2974 million and Euro 1301 million respectively.

Ulster Bank is one of the major commercial banks in Ireland; rather it is one of the traditional Big Four Irish banks. It was founded in the year 1836, around 181 years ago. The head-quarter of this bank is located in George’s Quay, Dublin. As per the data of 2013, it was found that around 3250 employees work in Ulster Bank. This bank is a subsidiary of The Royal Bank of Scotland Group.

It was founded in the year 1965, around 52 years ago. This is a subsidiary of Citibank, an American financial services company. The head-quarter of Citibank Europe is located in North Wall Quay, Dublin. It is one of the large foreign subsidiaries operating in Ireland.

Permanent Group Holdings was previously known as Irish Life and Permanent PLC. It is popular for offering personal financial services to customers in Ireland. It was established quite a long time ago, in the year 1884, almost 133 years ago. The head-quarter of this bank is situated in Dublin.

As per the data we got in 2015, it was found that both the net income and the operating income had been negative – Euro (425) million and Euro (399) million respectively. The revenue in the same year was Euro 694 million.

In the year 2011, the number of employees was around 500. Total assets acquired of KBC Bank Ireland PLC were Euro 23 billion (loan – Euro 17 billion & deposits – Euro 6 billion).

This bank was established in the year 1935 by Alex McCabe. The purpose of starting this institution is to provide affordable housing finance to teachers and other civil servants. In the year 2016, the number of employees worked here was around 350.

The net income and the operating income of EBS d.a.c. in the year 2016 were Euro 183 million and Euro 269 million respectively. Its head-quarter is located in EBS Building, Dublin.

DePfa Bank PLC is a German-Irish bank. It was founded in the year 2002, around 15 years ago. Though it was founded long ago under the control of the Prussian Government, later it is legislated by the Irish Government. The head-quarter is situated in Dublin.

The founder of this bank was Gerhard Bruckermann. It is a subsidiary of Hypo Real Estate. This bank has two major emphases – public sector and large infrastructure projects.

It provides commercial services to its local customers. It mainly provides inter-mediate or long term industrial and general credit. The head-quarter of Bank of Montreal (BMO) PLC is located in Seagrave House, Dublin.

We hope you liked this guide to top banks in Ireland. If you are looking forward to making a career in Banking, then you can check out some of the awesome resources –