Acquisition takes place when the financially strong entity acquires the entity which is less strong financially by acquiring shares worth more than fifty percent and the example of acquisition includes purchase of the company whole foods in the year 2017 by Amazon for $ 13.7 Billion and purchase of the company Time Warner by company AT&T in the year 2016 for $85.4 billion.

In this article, we are going to provide you the top 4 examples of Acquisitions. 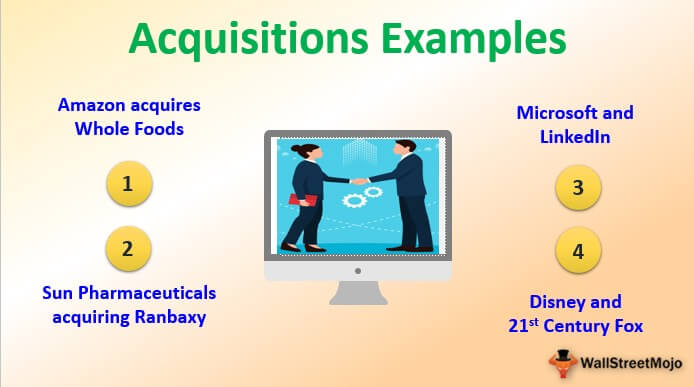 Amazon acquired whole foods for a total of $13.7 billion deal. It made the e-commerce giant move into many physical stores. It will make Amazon continue on its long goal of selling more groceries

Amazon paid $42 per share in an all-cash deal for whole foods, which included debt. The premium paid was ~27% to whole foods closing price on Thursday, June 15

Amazon paid $9 billion of the total $13.7 billion deal acquisition price paid. It means that Amazon paid nearly 70% for future growth prospects, and only the remaining 30% was based on the current business of whole foods. After the acquisition, the goodwill balance of Amazon was at $13.4 billion at the end of the fiscal year 2017, which was the largest in history and had more than 10% of the total assets.

As highlighted above, the grocery sector average, including whole foods over the last twelve months before the acquisition, was 8.4x. It was before the announcement of Kroger’s lower earnings announcement.

This news led to lowering the average multiple to 7.8x. The implied EV to EBITDA multiple of Amazon and whole foods was about 10.4x LTM EBITDA. It means whole foods was acquired at a 30% premium in comparison to its previous multiple, and the multiples of the other companies in the industry went down.

This pharmaceutical deal is an example of a share swap deal. According to the deal, Ranbaxy shareholders would receive four shares for every five Sun pharma shares held by them. It leads to a 16.4% dilution in the equity of Sun Pharma. The deal size was $3.2 billion and was an all-share deal. The consolidated turnover of Sun pharma was of INR 11,326 crore, and it acquired Ranbaxy, a company with a turnover of INR 12,410 crore. Thus, Ranbaxy achieved a valuation of 2.2x times the last twelve month sales.  The beauty of this deal is that a smaller size company acquired a bigger size company.

The value of Ranbaxy shares was INR 457 per share; this represents an 18% premium to the thirty-day volume on the weighted average share price.

Reasons of acquisition – This was a strategic acquisition for Sun pharma as it would help them to fill gaps in the US and also help them in getting better access to emerging markets and gain a strong foothold in the domestic market. Sun Pharma also had the opportunity to gain the number one position from the current third position in the dermatology space due to this acquisition. 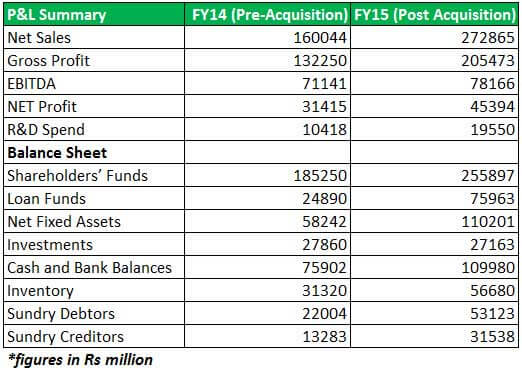 As you can see in the above table, the net sales of Sun pharma increased to 2,72,865, which shows the benefit it gained after the merger. Similarly, there is an increase in Gross profit, EBITDA, and net profit. The balance sheet clearly highlights the strengthened position of the company after the merger in every aspect. The fixed assets have more than doubled, and the cash balances have also increased considerably.

Microsoft acquired LinkedIn for $196 per share to a $26 billion deal and fought with its competitor Salesforce.com to do so. The shares of LinkedIn rose 64% after the announcement was made. It was an all-cash deal and was inclusive of all LinkedIn’s net cash. It represents a 50% premium to LinkedIn last closing price, and the total amounted to $9 billion. Microsoft bought LinkedIn at a price that is lower by 25% than its all-time high.

Microsoft financed this deal with the issuance of new indebtedness. The deal is expected to have a dilution of ~1 percent to the Non-GAAP EPS.

The reason for this deal is mainly the 433 million LinkedIn subscribers and professional clouds. The core idea was primarily to boost data productivity.

Disney acquired 21st-century fox for $71.3 billion. It was a real shakeup for the entertainment business. This deal brought together two major giants of the entertainment world. Disney won this deal from its competitor Comcast and took nine months to get the necessary approval. It is one of the biggest deals in recent times. This deal will lead to lay if of more than 4000 jobs.

Assets changing hands in the deal include:

There are various methods in which acquisitions can be conducted. It can either be friendly or hostile. As seen in the above examples of acquisition, it is not necessary that only a large company has the capacity to acquire a small company; it is also possible the other way round as highlighted in the Ranbaxy and Sun pharmaceutical deal

There are various pre and post steps that the company needs to take before proposing the acquisition. The most crucial aspect to look at while going for an acquisition is of the synergies, especially in the case of strategic acquisitions. The acquirer is looking for expanding his business or to gain assets and then using them to further expand the business. The target, on the other hand, is looking for either control over operations and also gains to its shareholders

This article has been a guide to Acquisition Examples. Here we discuss the top 4 practical examples of acquisitions like Amazon acquires Whole Foods, Microsoft and LinkedIn, Disney and 21st Century Fox, etc. You can learn more about financing from the following articles –