What is a Bearer Bond? 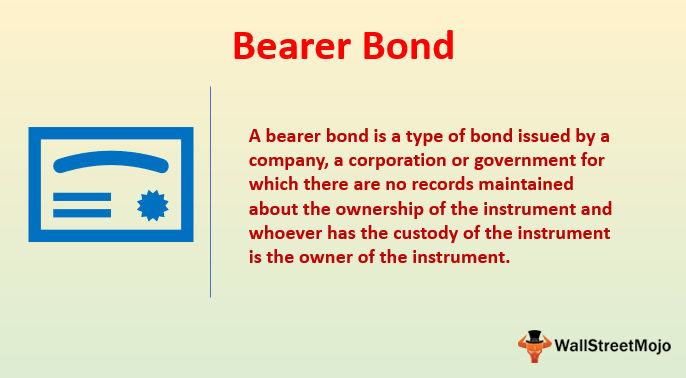 Examples of a Bearer Bond

The following are examples of a bearer bond.

Let us understand the meaning of the bearer bond with the help of a simple example:

Bearer bonds are like our currency notes. The moment we hold it in our possession, it becomes ours. For instance, while walking on a road, if we find a dollar, we pick it up, and it becomes ours with no validation required. The same is with the case of a bearer bond. Whoever possesses it owns it.

Let us understand the working of the bearer bond with the help of another detailed example:

Say, Mr. K buys a $100 bearer bond of the Company ABC. The coupon rate on such bonds is 8%. ABC has to pay Mr. K an interest of 8% ($100 X 8%) on the face value of the bond. For receiving this interest amount, Mr. K has to untie the particular coupon from his instrument and present it to the agent of the company or the banker, as the case may be.

Even when the bond trades at an amount higher or lower than $100, the coupon payment will remain unaffected.

Because of the limitations of the bearer bonds, securities are being issued in the book-entry form. That means the name of the owner is recorded electronically, with no physical certificate being issued. This cancels out the theft and misplacement limitations of the bearer bonds, ensuring that the actual owner receives the interest and dividend payments.

What are the Differences between Bearer Bonds and Registered Bonds?

To sum up, bearer bonds, also referred to as coupon bonds or sometimes unregistered bonds, are the ones that belong to the current possessor of the bonds. They do not have the name of the owner written just like a currency note. Hence, the interest and the coupon payments are made to the bearer of the instrument. These instruments became the main reprobate in illegal activities like tax evasion, money laundering, etc. because of which it has been prohibited in many states. The better version of bonds, as stated above, would be the registered bonds, which are more prevalent now.

This has been a guide to what are bearer bonds, and it’s meaning. Here we discuss examples of bearer bonds along with limitations, advantages, and disadvantages. You can learn more about valuation from the following articles –