What are the Bills of Exchange?

Bills of exchange are negotiable instruments that contain an order to pay a certain amount to a particular person within a stipulated period of time. The bill of exchange is issued by the creditor to the debtor when the debtor owes money for goods or services.

The most important part of a bill of exchange is that it needs to be accepted by the debtor before we can call it valid. If the debtor doesn’t accept it, it doesn’t have any value. Once the debtor accepts the bill of exchange, it is levied on the debtor to pay off the amount due to the creditor.

The parties involved in the transaction are drawer, drawee, and payee. 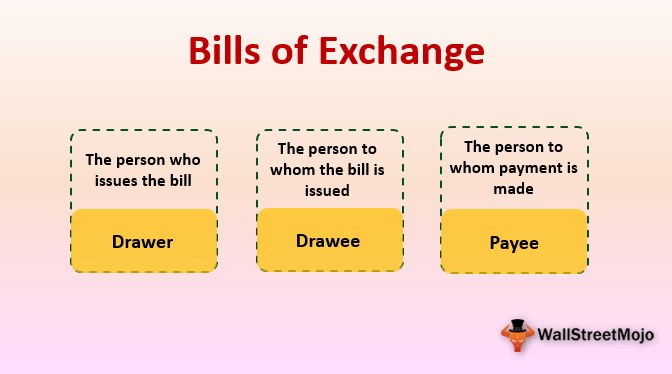 Let’s take a couple of examples to illustrate the meaning of bills of exchange.

In this situation, we can see that Mr. M has issued a bill. Mr. M here is a creditor to Mr. B. Mr. B is a debtor who has purchased goods from Mr. M on credit.

In this case, ABV Company’s bill would be called “dishonored.” And for that, all of the parties involved here will be issued a notice which would mention that the bill has been dishonored.

Features of Bills of Exchange

Parties involved in the bills of exchange

We have already mentioned the parties involved in the bills of exchange. Here, in this section, we will understand in detail the inherent meaning of drawer, drawee, and payee.