What are Promissory Notes?

Promissory Notes is a negotiable instrument signifying a written consent by the debtor or the writer (the maker) to pay promised sum to the creditor (the payee) on a specified date, where the drawer can never be the payee and a promissory note doesn’t require a consent of the payee and the payee can use the payer in case of non-payment of the promised amount.

The promissory note isn’t bound by acceptance. That means when the debtor issues the promissory note, the creditor doesn’t need to accept it. At the same time, if it is dishonored, there would be no notice issued for the “maker” of the note since the “maker” only promises to pay the amount within a specified period of time.

Let’s say that Mr. T wants to buy a new garage for his cars. He has two cars but doesn’t have a place to park them. He approaches a bank for a loan to build a small garage. The bank looks at his financial statements for the last few years and sees that they would be able to sanction a note of $100,000 for the next 10 years.

In this case, Mr. T needs to write a promissory note and offer the bank with his sign underneath that he would promise to pay the necessary amount within 10 years.

In a promissory note, sometimes, the lender can ask for security against the loan. It can be a house or an asset. The borrower keeps the asset as a security for the loan he has been taking and then issues a promissory note to pay off the debt within a stipulated time.

In this case, the borrower may lose the asset if he is unable to pay off the money as he promised.

Features of a Promissory Note

Let’s look at the significant features – 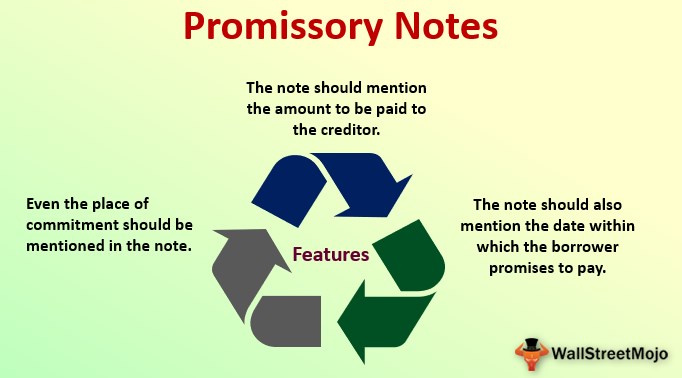 Even if we have mentioned the parties involved in the note before, we need to understand each of them in detail. Here are they –

This has been a guide to Promissory Notes, definition along with practical examples. Here we also discuss parties involved and features of Promissory Notes. You may also have a look at these articles below to learn more about fixed income –