What are International Bonds?

International bonds are debt instruments that are issued by a non-domestic company in order to raise money from international investors and are usually denominated in the currency of the issuing country with the primary objective of attracting more investors on a large scale. 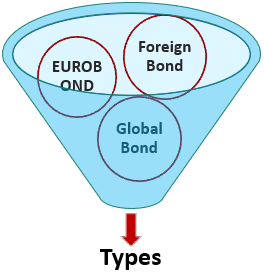 An example would be a Spanish Bank (A) issuing a Japanese yen-denominate bond (B) in London (C).

A Foreign Bond is a bond that is issued in a domestic market in domestic currency by a Foreign Entity. Foreign bonds can have the following differences between the issuer, denomination, and the country in which it is being issued:

The denomination of the bond will be Country B’s currency. An example would be a French Company (A) issuing a US dollar bond in the US.

The third type of international bond is a bond that is issued by a foreign investor in a different currency other than the home currency and is also being issued in a market for which the currency is domestic simultaneously. Global bonds can have the following differences between the issuer, denomination, and the country in which it is being issued:

An example would be an Australian Bank (A) issuing a GBP Bond (B’s currency) in London (B’s country) and in Japan (C). 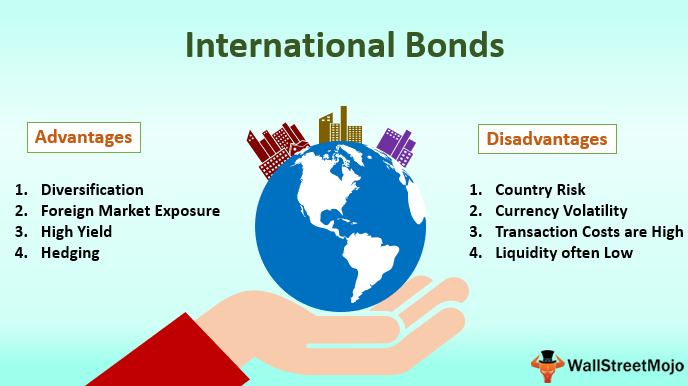 International bonds are very much suitable for diversifying the portfolio at the international scale, gaining exposure to foreign securities, high returns, and if the investor wants to hedge his exposure in a foreign economy. But at the same time, International bonds bring up the currency and country-specific risks. Also, Investor has to be aware of international market concerns as well as geopolitical and economic risks before investing in such bonds.

This has a guide to What are International Bonds and its Definition. Here we discuss the international bond types along with characteristics, advantages, and disadvantages. You can learn more about from the following articles –