What is Bullet Bond?

Bullet Bonds (also known as Straight Bonds) are standard bonds that make periodic interest payments and repayment of the principal amount at maturity of the bond and don’t contain any exotic features such as embedded call feature or put feature etc. These bonds aren’t principal amortized and their principal amount remains the same throughout the tenure and payable only at the end of the tenure. 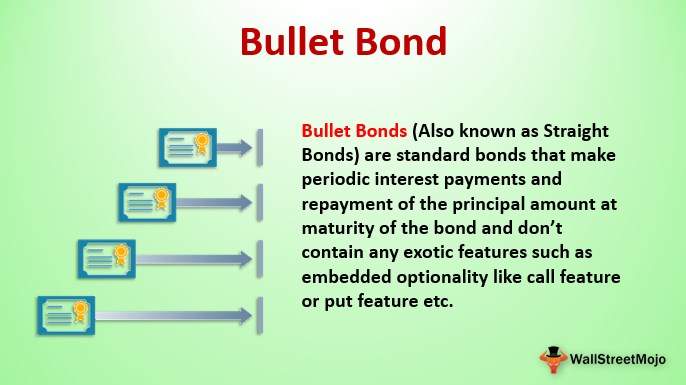 The US government decided to issue a dollar-denominated bullet bond that carries a fixed coupon interest payment of 3.5% payable semi-annually maturing after 5 years with a principal face value of $1000 on 1st January 2018. The bonds mature on 31st Dec 2022. The current yield on such bonds is 3%.

The above bonds will make payment after every six months equivalent to $35 and will repay the principal amount of $1000 along with the last interest payment on 31st Dec 2022. Based on the facts, we can determine the present value of such a bullet bond, as shown below: 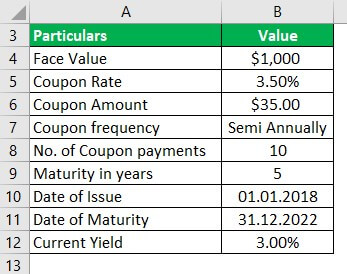 Determine the present value of such a bond, as shown below: 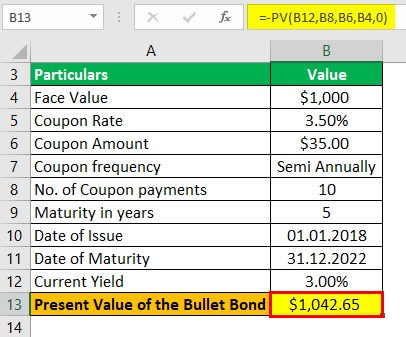 Alternatively, the same can be calculated by discounting the Coupon payments and Principal payment individually, as shown below: 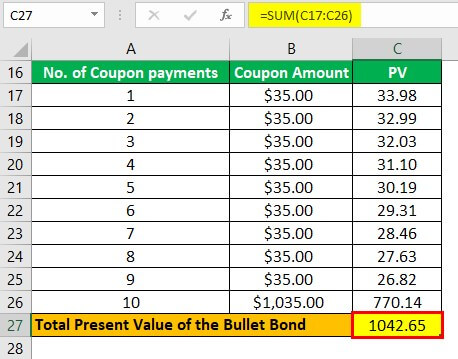 Here are the key differences between:-

Bullet Bonds are the most common and widely issued bonds across the globe. Banks and financial institutions regularly invest in such bonds issued by a sovereign government, and it forms a major part of their investment portfolio. It is also important to mention that non-sovereign bonds carry a high amount of counterparty risk, which needs to be taken into account before investing.

This has been a guide to what is bullet bond and its definition. Here we discuss an example, strategy, and differences of bullet bond with amortizing bond along with advantages and disadvantages. You can learn more about financing from the following articles –